Skip navigation!
Story from Designers
With the announcement that LVMH has officially taken a stake in the J.W. Anderson brand, one would think that the holding company seems to have a soft spot for young, immensely talented British designers. And, who could really blame them? Confirmation of the new partnership between Anderson and LVMH comes only about a week after the close of London Fashion Week and just a few days after sealing the deal with fellow Brit fashion star, Nicholas Kirkwood.
According to WWD, the financial details of the new partnership were not disclosed; however, it reports that it was a "minority stake." In addition, 29-year-old Anderson will also take over design at Loewe and, as the report claims, work on creating a "new personality" for the brand. (WWD) 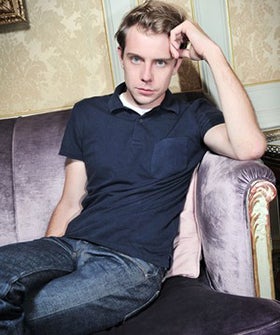 Photo: Via WWD.
Designer Collaborations
Gucci Announced A Collab With North Face & It’s Coming Soon
On Wednesday, a day before Miuccia Prada and Raf Simons made their collaborative debut for Prada, another (albeit very different type of) collaboration was
by Eliza Huber
Style
Bella Hadid, Erykah Badu & Rosalía Hosted Burberry’s Runway...
If you can’t bring celebrities to the front row, why not bring the show to them instead? As a very unconventional London Fashion Week kicks off today
by Georgia Murray
Style
Christian Cowan’s NYFW Collab With Lil Nas X Gives Back To Atlant...
British designer Christian Cowan has never been one to settle for just okay — especially when it comes to fashion week. So, of course, for spring ‘21,
by Eliza Huber
Style
Rihanna’s Savage X Fenty Show Is Returning With Performances From...
Following the success of Rihanna’s Savage X Fenty show on Amazon last September, Prime Video will be airing a second fashion show to celebrate the fashio
by Irina Grechko
Fashion
Why Designer Tanya Taylor Is Not Showing Clothes This NYFW
As most designers are concluding showing their new collections at New York Fashion Week, Tanya Taylor used her Thursday time slot on the NYFW: The Shows ca
by Irina Grechko
Style
Telfar Won NYFW By Announcing A Collab With UGG
On Wednesday night, Telfar Clemens did what he does best by one-upping everyone and everything — even the first-ever digital New York Fashion Week — wh
by Eliza Huber
Fashion
Sweatsuits Are The Anti-Fashion NYFW Trend We Should Have Expected
by Irina Grechko
Style
Chromat’s NYFW Film Sends An Important Message & Debuts New Masks
Last September, Chromat’s Becca McCharen-Tran blew her competition at New York Fashion Week out of the water with a runway show unlike any before it.
by Eliza Huber
Style
Pyer Moss, Telfar & Christopher John Rogers Are CFDA Fashion Awar...
On Monday, during the first-ever digital NYFW, the Council of Fashion Designers of America (CFDA) announced the winners of the 2020 Fashion Awards. And des
by Eliza Huber
Style
Harlem’s Fashion Row NYFW Event Was A Celebration Of Black Talent
On Sunday, to kick off spring ’21 New York Fashion Week, Harlem’s Fashion Row, a platform designed to support and amplify Black creatives in fashion, h
by Eliza Huber
Style
Fendi Taps Kim Jones As Its New Artistic Director
On Wednesday morning, a changing of the guards took place at Fendi, with Dior Men’s Kim Jones appointed as artistic director of the Italian luxury house.
by Eliza Huber
Style
Birkenstock’s New Designer Collab Includes A Camo Version Of Its ...
It’s winter of 2019, and you’re looking at the photos from the fall ’19 Valentino menswear show. Out of the corner of your eye, you spot them: Bi
by Eliza Huber
Discover
R29 Stories & News
Watch
R29 Original Series & Films
Shop
R29's Most Wanted