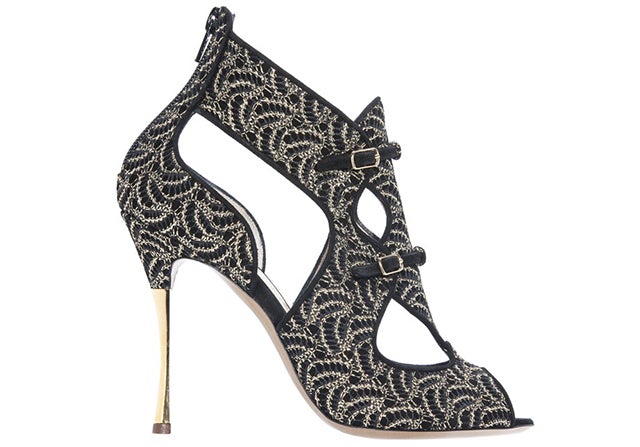 Photo: Courtesy of Nicholas Kirkwood.
LVMH, the holding company under which Louis Vuitton, Marc Jacobs, and Céline fall under, has taken stake in Nicholas Kirkwood. As reported by WWD today, the young British designer who's know for his avant garde, statement-making shoes has had his brand acquired for an unknown price. Following a spat of acquisitions of other young designers, including Christopher Kane and Joseph Altuzarra, both with Kering, Kirkwood has joined the LVMH family at a time when he plans to take this already-successful brand to the "next step."
Of course, with the support of one of the largest luxury fashion investors, those new steps for Kirkwood could be more like leaps. While the idea of Nicholas Kirkwood handbags has been tossed around before, the 33-year-old designer says that's likely the next venture for his namesake brand, although as he told WWD, "I have no timelines to do that." No pressure, Nicholas, but we'll be waiting. (WWD)
Designers
The New Christopher John Rogers Runway Show Was Worth The Two-Yea...
Even before the Christopher John Rogers show began, the unabashedly optimistic styles by the Louisiana-born, New York-based designer were on full display.
by Irina Grechko
Fashion
This Might Be Chromat’s Most Inclusive Swimwear Collection Yet
Becca McCharen-Tran is waiting for a call from DHL. The samples from Chromat’s Spring 2022 collection of inclusive swimsuits — for trans femmes, non-b
by Carli Whitwell
Style
Costume Institute’s New Exhibit Highlights American Fashion’s Ove...
What is American fashion? A little less than a year ago, the Metropolitan Museum of Art’s Costume Institute began to answer this question with the “In
by Irina Grechko
Advertisement
Best Wedding Dresses
Meet The Bridal Designers Behind Some Of Today’s Coolest We...
Welcome to Aisle Style, a week-long series that features the most untraditional wedding fashion trends, bridal designers behind the coolest wedding lo
by Fawnia Soo Hoo
Designer Collaborations
Iris Apfel x H&M Is Here — Here’s How The Style Icon Wants You To...
by Irina Grechko
Designers
Alexander McQueen Returned To NYC After 20 Years With A Nature-In...
There was a lot of talk about mushrooms ahead of the Alexander McQueen Fall 2022 fashion show. As soon as teasers began to quite literally sprout in the fo
by Irina Grechko
Black History Month 2022
Ruth E. Carter Is Black History, Present, And Future
R29Unbothered continues its look at Black culture’s tangled history of Black identity, style, and contributions to the culture with ROOTS, our annual Bla
by Venesa Coger
Adidas
Gucci’s Latest Collection Includes A Collab With Adidas
After months of rumors, Gucci confirmed that it’s partnering with Adidas with the release of the brand’s fall 2022 collection during Milan Fashion Week
by Frances Solá-Sant...
Designers
Y2K Fashion Defined 2021 — 10 Brands That Led The Charge
by Shelby Ying Hyde
Designers
Virgil Abloh Is A Reminder That Fashion’s Most Prolific Designers...
Barrier-breaking designer. Genre-bending artist. Visionary. These are some of the ways people have described Virgil Abloh after it was announced that the 4
by Irina Grechko
Unbothered
Anifa Mvuemba Took Over D.C. With Hanifa’s First Runway Show & Sh...
Designer Anifa Mvuemba is known for her beloved brand, Hanifa, which is full of vibrant and bold colored designs. On Tuesday (Nov 16), she debuted her firs
by Venesa Coger
Designers
Bottega Veneta Green Was Fashion’s Favorite Color. What Hap...
It was the color of the year — at least, it was for fashion types. Few cared about Pantone’s gray and yellow when there was “Bottega Veneta green”
by Katy Kelleher
Advertisement
Advertisement
Discover
R29 Stories & News
Watch
R29 Original Series & Films
Shop
R29's Most Wanted