Skip navigation!
Story from Entertainment News
Lady Gaga may well be storming up the charts and hitting headlines with her big comeback, but she’s got someone on her tail. And no, it's not Katy Perry. It's Ellie Goulding, who’s also got fighting words for her fellow songstress.
With Goulding’s single "Burn" currently beating Gaga’s "Applause" on the U.K. charts, she’s in good stead to make some bold statements. And heck, that’s precisely what’s she’s doing, warning Gaga that she’s trounced her once, and she’ll trounce her again. Ooh, burn. Speaking out about the rivalry, Goulding said, “It’s her big comeback single and she hasn’t released anything in a while. Hopefully, mine will stay at the top. It’s put up a really good fight.” Okay, but we're pretty sure there's room at the top for the both of you.
Advertisement
Offering some more modest words elsewhere, the British singer is still in shock over cracking America, not to mention earning an MTV Video Music Award nomination. “It’s still something I will never comprehend because I came to America for a couple of years, trying to make it out here…During that time, Lights started climbing up the charts very slowly. I think it has the record for the slowest climb to number one. It was bizarre. The VMA thing is just crazy. I am going to be there because it’s a really big thing for me.” So, which blondie are you backing? (Metro) 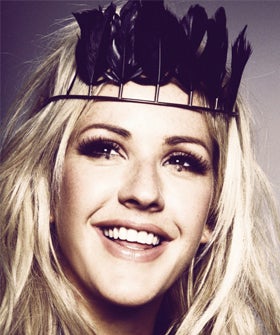 Unbothered
CBS Will Now Turn Its Controversial Activist Competition Series I...
Updated September 16, 2021: After a wave of backlash followed the announcement of its controversial new series, CBS is going back to the drawing board to r
by DarkSkyLady
Unbothered
Megan Thee Stallion Wins Two Big Legal Victories — Against Her La...
Megan Thee Stallion scored two major legal wins this week, after a judge granted her the go-ahead to release the remix of BTS’ Butter that she is feature
by Tayo Bero
Unbothered
American Idol Alum Syesha Mercado Is Still In The Midst Of...
Singer and American Idol alum Syesha Mercado has regained custody of one of her two young children who were taken from her by authorities in Florida. Merc
by Tayo Bero
Advertisement
Unbothered
The Woman Assaulted By Nicki Minaj’s Husband Is Setting The Recor...
*Editor’s note: this story contains discussions about sexual violence, threats and intimidation.  Jennifer Hough —  who was assaulted by Nicki Minaj?
by Tayo Bero
Entertainment News
What You Need To Know About R. Kelly’s Trial That’s B...
This story contains discussion of sexual violence. Please proceed with care. On August 18, singer and producer R. Kelly will finally face trial for a litan
by Natalie Morin
Entertainment News
‘Self-Made Legend’: Lil Nas X On Being A Gay Icon And...
Lil Nas X has had an amazing year but like anyone in the early stages of a career on the rise, the journey hasn’t come without its share of struggles, do
by Tayo Bero
Entertainment News
Britney Spears’ Dad Is Finally On His Way Out Of Her Conservatorship
In a surprising and sudden development in Britney Spears’ ongoing conservatorship battle, her father has finally decided to step down from her conservato
by Natalie Morin
Unbothered
Beyoncé Talks Dangers of Dieting, Protecting Her Peace And Mindin...
Beyoncé is on the cover of Harper’s Bazaar’s September 2021 issue. In the feature, the usually-private superstar shares some of the lessons she’
by Tayo Bero
Unbothered
Dr. Dre Is One Of Hip-Hop’s Wealthiest Men — But His Daughter & G...
LaTanya Young, the eldest daughter of music mogul Dr. Dre, has revealed that she and her four children are homeless and haven’t gotten a dime from her mi
by Tayo Bero
Unbothered
Rihanna Is The Only Billionaire Allowed To Exist
Rihanna is officially a billionaire. According to Forbes, Rihanna is now worth $1.7 billion — making her the richest female musician in the world and the
by Tayo Bero
Unbothered
When Will Michael Che Face Consequences For Punching Down On Blac...
SNL host, writer and comedian Michael Che is showing zero remorse for crude comments he made about gymnastics legend Simone Biles, after she withdrew from
by Tayo Bero
Unbothered
DaBaby’s “Apology” Proves He’s Not Really Sorry For Homophobic Co...
After days of backlash for making homophobic comments on stage, rapper DaBaby offered an “apology” — and it’s not a good one. If you were hoping fo
by Tayo Bero
Advertisement
Advertisement
Discover
R29 Stories & News
Watch
R29 Original Series & Films
Shop
R29's Most Wanted