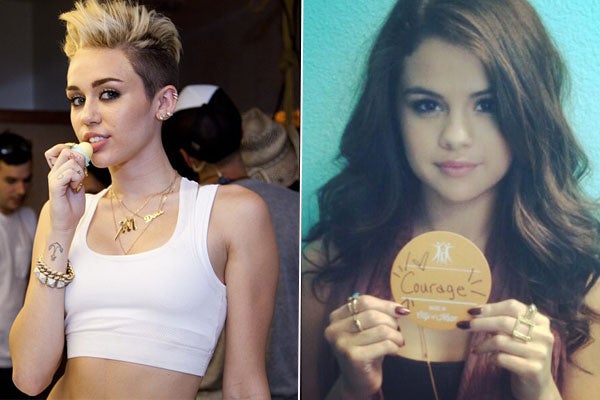 Hey, pop culture consumers and the world at large, the New York Times wants you to know that there is a distinct difference between Miley Cyrus and Selena Gomez. In a recent piece by Jon Caramanica, the Times breaks down the professional and personal trajectory between the two rising starlets, comparing their similar beginnings and their increasingly divergent paths. In it, he writes, "Of late, Miley Cyrus, 20, and Selena Gomez, who turned 21 on Monday, have each been pushing back in different ways — Ms. Gomez with her role in the film Spring Breakers, and Ms. Cyrus with her sometimes erratic, sometimes free-spirited tabloid life." He then goes to argue the closer that Miley Cyrus' artistic output mirrors her personal life, the better she becomes.
Advertisement
The word choices used to describe the two pop princesses demonstrate a clear delineation between Cyrus and Gomez. Cyrus's process includes "...feeling out new forms of rebellion, including the touristic appropriation of black culture," while Gomez's is particularly milquetoast. Her newest album, according to Caramanica, is "breathy, wide-ranging, largely toothless."
Caramanica is right to turn to these two young actresses/idols/musicians as a barometer of the pop cultural world, because they are certainly exemplary of the state of pop culture (and, of course, tabloid culture, as well). Both fulfill reasonable, identifiable, relatable roles for young women. Miley, the rambunctious rebel who is using her music to jettison her identity forward; Selena, a biracial young woman who is poised, graceful, and a friend any young girl would want to have; and even, to extend the comparisons of other young stars — Demi Lovato as the impassioned, slightly tortured diva, and Vanessa Hudgens as the laid-back West Coast bohemian who has eschewed music for film.
Yet, for all of their seeming differences, Caramanica neglects to point out the most fascinating thing these two share: their similarities. Miley and Selena are both fervent anti-bullying advocates, loyally devoted to their fans, and welcome all types of listeners. Both of them want the population at large to believe that they are "good" people, even though they make bad choices — and they encourage their devotees to be kind to one another...even when they make bad choices, too.
Young girls respond to both Miley and Selena because the specific personality traits (which are, according to Caramanica, "rebellious" and "safe", respectively) they sell to us are appealing. Where Miley harnesses an inner rebel, Selena embraces a wholesome good time in a pure, unself-conscious way (unlike, say, Taylor Swift, whose self-effacing hand-wringing is what makes her so popular with adults). Yet, it is their open accessibility and honestness, along with their all-inclusive message, that keeps a younger generation hungry. And having today's former Disney stars feel out their own way while also espousing tolerance and respect — no matter how calculated that way may be — is so much better than being subjected to a child star who insincerely sells the virginal act. The music, it appears, is secondary. (NY Times)

Meghan Markle
We Just Got Two Major Updates About Meghan Markle’s Lawsuit...
New developments in Meghan Markle’s ongoing lawsuit against Mail on Sunday have surfaced, further complicating the Duchess’ previous testimony and impa
by Ineye Komonibo
Documentary
Cheer‘s Jerry Harris Has Been Arrested & Charged W...
Update Sept. 17, 2020: Jerry Harris of the Emmy-nominated Netflix show Cheer has been arrested and charged with the production of child pornography. Accord
by Natalie Morin
Entertainment News
Migos’ Takeoff Denies Sexual Assault Allegations In New Sta...
Updated August 6, 2020: Takeoff has denied the accusations of rape made against him, calling the allegation “patently and provably false.” In a
by Ineye Komonibo
Pop Culture
Frank Ocean’s Younger Brother Ryan Breaux Killed In Car Acc...
Update August 6, 2020: Ryan Breaux’s mother, Katonya Breaux, publicly mourned the loss of her son on Instagram, after the 18-year-old was killed in a
by Natalie Morin
Voices of Disability
Say The Word: Disabled
One in four adults in the U.S. are living with a disability, but you wouldn’t know it given the lack of representation in the workforce, Hollywood, a
by Maysoon Zayid
Pop Culture
Hayden Panettiere Shares Abuse Hotline After Her Ex Is Arrested &...
Actress Hayden Panettiere’s ex-boyfriend Brian Hickerson was arrested on July 16 and charged with corporal injury on a spouse/cohabitant. Panettiere
by Natalie Morin
Entertainment News
A Body Has Been Found In The Lake Where Naya Rivera Went Missing
Update July 13, 2020: Ventura County’s investigation into the disappearance of Naya Rivera has led to the discovery of an unidentified body. Accordin
by Ineye Komonibo
Entertainment News
Police Are “Confident” They Have Found The Body Of Naya Rivera Af...
After days of actively searching for her body in Southern California’s Lake Piru, local police officers have confirmed that the body of Naya Rivera has b
by Ineye Komonibo
Entertainment
Actress Kelly Preston Dies At 57
At age 57, Kelly Preston has died. The Hollywood actress passed away yesterday after a two-year struggle with breast cancer that she and her family had dec
by Ineye Komonibo
Entertainment
Justin Bieber Denies Sexual Assault Allegations On Social Media
Days ago, Justin Bieber was accused of sexual assault in a now-deleted Twitter thread that detailed a harrowing encounter between the star and a fan in 201
by Ineye Komonibo
Entertainment News
Ansel Elgort Denies Allegations Of Sexual Assault In Apology To H...
Ansel Elgort has denied an allegation of sexual assault that appeared on Twitter last week. In it, Twitter user @Itsgabby accused the West Side Story actor
by Kathryn Lindsay
Entertainment News
Beyoncé Demands Justice In Passionate Letter As Breonna Taylor...
Your social media timelines may have resumed their normal activity following the trendy black squares, but the uprising against racism hasn’t lost an
by Ineye Komonibo
Discover
R29 Stories & News
Watch
R29 Original Series & Films
Shop
R29's Most Wanted