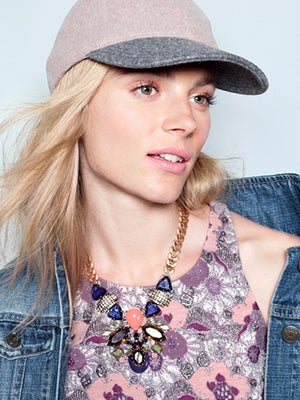 There's absolutely no doubt that J.Crew has undergone a transformation in the capable hands of Jenna Lyons. One-time purveyor of your most basic, standard khakis and v-neck sweaters, the catalogues are now at the forefront of a growing movement in mass fashion that provides increasingly savvy consumers with a strong, definitive point of view on personal style. That's what makes it one of our favorite brands — and as Racked points out, fashion media and its audience seem to be at a consensus that the revamped image is a good thing.
But Forbes writer Chris DeRose recently reminded us that while this might appear to be the mainstream view in the R29 comments section, it's not necessarily the case for the brand's more veteran shoppers. DeRose's wife recently wrote an e-mail sharing her disappointment with her go-to shop: “I am so disheartened and disappointed that you are leaving your core values and styling and abandoning your loyal customers,” she wrote in a letter to a generic customer service address. “Why mess with these iconic brands and change them into something they’re not?” And while we generally assume such e-mails disappear into a gigantic black hole known as the Internet, this time, someone was really paying attention — Mickey Drexler, J.Crew CEO and, along with Lyons, one of the people credited with leading J.Crew from your typical heritage brand into a unique blend of chain boutique with a distinctly upscale feel. He called Mrs. DeRose personally (along with company president Libby Wadle) not to defend the brand's choices, but to hear her out. According to DeRose's essay, Drexler admitted that the styling may have gone too far, noting that he and his team are “on it for sure...I hope you see a difference this fall.” (Lyons would have also been on call, but she was on a family vacation.)
Now, we can see Mrs. DeRose's point. For people who originally came to J.Crew for conservative, simple basics, the transition may have come as a shock. Part of this may be due to the fact that the new styling seems to skew a bit younger than previously, though the same could be said of brands that cater even more specifically towards older women like Chico's or the recently-revamped Eileen Fisher. It's true that, as one of the New York scene's best-dressed (and most-watched) women, Jenna Lyons is catering to a specific audience and hoping to up the brand's reputation among industry insiders. Incidentally, that's an attempt that has been made at pretty much every chain store in America, including, most notably, Target and H&M. But we still have to disagree, because, fundamentally, we feel that the essence of J.Crew has not changed — it's merely the editorial vision. If you want sweater sets and sensible trousers, you can still get that at J.Crew. But now you can also get the season's latest trends reinterpreted and filtered in a way that still feels on-brand for the more traditional J.Crew woman. J.Crew has positioned itself not only as a retailer but as a purveyor of a specific stylistic vision, and in this era of online shopping, with its endless pages and pages of merchandise of indeterminable quality, that's not only a smart move but a necessary one. Lyons and Drexler should keep their core consumer in mind, but their core consumers, we hope, should also realize that what they love hasn't disappeared. Rather, it's now being presented in a way that is both challenging and accessible — a thoroughly democratic strategy that, for our part, is right in line with the future of fashion as an increasingly relevant and widespread creative medium. (Forbes via Racked)