Story from New York
To our dismay, trailblazing journalist Helen Thomas passed away today in Washington, D.C. Our world has lost one of the greatest barrier-breakers in the industry — Thomas was the very first female reporter to be assigned to the White House press corps full-time, shortly after President John F. Kennedy's inauguration. She went on to cover every president from Kennedy to Obama, retiring only in 2010. During her tenure in Washington, she broke news about Watergate, interviewed President Reagan mere weeks after his assassination attempt, and was the only female journalist to accompany President Nixon on his breakthrough trip to China in 1972. She was also the first woman to serve as president of the White House Correspondent's Association, and published half a dozen books on Washington and presidential politics. If not for her dedication and hard work, we, and many of our fellow writers, would not be where we are today. Read The New York Times' beautiful obituary to learn more about her legendary life and career. (The New York Times)

Photo: Via The New York Times. 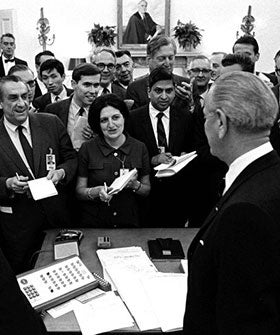