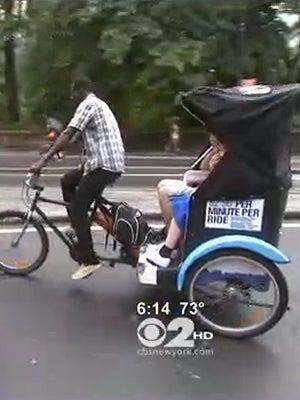 With confusing signs in small type, pedicab drivers are often able to get away with charging upwards of $50 for a trip that spans a mere 10 blocks: $5 to get into the cab, $2 for each regular block, and $3 for a crosstown block. Per person. But recent reports have shared that some pedicab drivers are taking things even further.
Laramie Flick, acting president of the NYC Pedicab Owners Association, was infuriated by recent news of a pedicab driver charging a whopping $720 for a 20-minute ride. A Japanese tourist asked the driver how much a ride would cost. The driver pointed to a sign that read $5. Easy! But when they arrived at their destination less than half-an-hour later, the driver said $520. Shocked and unaware of how to handle the situation, the woman handed over her credit card, only to return to Japan to a credit card charge of $720.

Furious, Flick and likeminded drivers are taking action. New rules that require drivers to post large signs indicating charges by the minute are scheduled to go into effect July 12. Drivers will also use stopwatches calibrated exclusively by the Department of Consumer Affairs. We can only hope the mischievous drivers take these changes to heart. After all, we just want everything to be fare.
(CBS Local New York)