Skip navigation!
Story from New York
When Dealbook profiled the daily lives of Wall Street interns, many of whom are currently flooding the city for the summer session, we expected a harrowing and grueling portrayal of thankless work in a notoriously tough industry. What we got instead? A lot of very upbeat attitudes, boundless enthusiasm, and a sense that these kids actually take pride in participating in an industry that has been the subject of increasing controversy in recent years. And that's pretty great.
Of course, some of these internships pay really well, and it's the compensation (or rather, lack thereof) that has caused fashion internships to come under particular scrutiny. But the fact remains that, paid or not, interns are often expected to be taken advantage of. And applicants know, expect, and even enjoy that, going into it. That's the tone of many of the Tweets and Instagrams featured in this piece. The students seem to glory in #nosleep, two-hour commutes, and late nights followed by early mornings. They are, in a word, hardcore. But is that always a good thing? 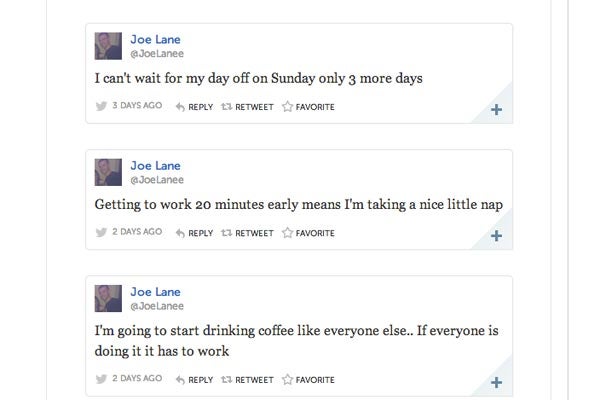 The question here is this: Do internships like this set people up for a lifetime of working too hard and too much? Is there such a thing? We, of all people, have a hard time tearing ourselves away from our desks — but we know that no amount of money or work experience is worth it if you can't go out and participate in the world at some point. What do you think, former (or current!) interns? Was your experience a chance to learn and figure out what you really want in your career — or were you simply shuffled into the working world before you even realized it?
Food & Drinks
Is A Bagel Really A Bagel If It Isn’t In NYC?
by Elizabeth Buxton
New York
We Dig This NYC Dim Sum
by Camille Coklow
Beauty
The 17 Most Epic NYC Massages
by Kayla Jacobs
Movies
11 Movies Perfect For A Glorious Snow Day
by Vanessa Golembewski
New York
You HAVE To Try The Avocado Toast At These NYC Restaurants
by Elizabeth Buxton
New York
The Absolute Best Spots To Slurp Ramen In NYC
by Zoe Bain
New York
The NYC Rooftops You Need To Hit This Summer
by Elizabeth Buxton
Beauty
The Best Cheap Haircuts In New York City
Choppa style, for cheap.
by Liesa Goins
New York
The Indie Bride-To-Be’s Guide To Dress Shopping In NYC
by Ashley Castanos
New York
Is This Really What The NYPD Thinks About Rape?
NYPD captain Peter Rose has angered rape advocates after saying “acquaintance rape” cases are not as serious as rapes committed by strangers.DN
by Shannon Carlin
US News
Why This New York Subway Mural Of A Gay Couple Is So Important
The New York subway system is making headlines this week, with the opening of its long-awaited Second Avenue line. One of the new stations along that line
by Sabrina Rojas Weiss
New York
7 Last-Minute Places To Eat Out If You’re In NYC On Thanksg...
For some New York City residents, “heading home for the holidays” means taking the 1 train back uptown to a tiny apartment and cooking a festiv
by Elizabeth Buxton
Discover
R29 Stories & News
Watch
R29 Original Series & Films
Shop
R29's Most Wanted