Skip navigation!
Story from Fashion
The countdown to the 2013 London Collections: Men has officially started. The event timetable has just launched, and boy, does it promise the biggest and best year yet. The three-day schedule was announced at a party thrown by Dylan Jones, Editor of GQ and Chair of the London Collections at the British Residence of the HM Consul General in New York. Not the most obvious choice of location to celebrate a London-based fashion event but as Jones explained, “I am sure David Cameron is sick with jealousy because the views from here are much better than the views from Downing Street.” We couldn’t possibly comment.
Advertisement
While we welcome the luxury powerhouses Burberry, Pringle, and Jimmy Choo back into the fold with their first menswear runway shows on U.K. soil in years, we’re most keen to see emerging U.K. design talent have their chance to shine through the Newgen Men show on Sunday, June 16. It’s a joint collaboration between Topman and Fashion East to showcase looks from three of the most promising menswear designers in the capital. Watch this space. (WWD) 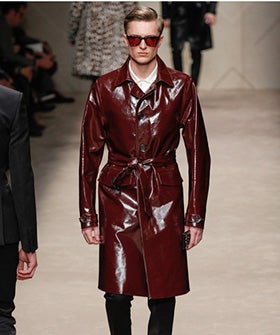 Mother's Day
16 Of The Sweetest Personalized Presents (You’ll Want To Or...
by Amanda Randone
Most Wanted
In A Golden Age Of Loungewear, Lululemon Reigns Supreme — & Here&...
by Karina Hoshikawa
Fashion
From Rebecca To Moulin Rouge: The Femme Fatale Powe...
What color best embodies jealousy? One might, at first, be inclined to say green. After all, it’s the shade most readily associated with envy: a bilious,
by Rosalind Jana
Shopping
18 New Black Boots To Help You Dip Your Toes Into Fall
by Us
Style
Tracee Ellis Ross Will Convince You To Wear A Corduroy Suit With ...
Mid-trip down the aisle to showcase her hair care brand Pattern Beauty’s new Ulta launch, Black-ish star Tracee Ellis Ross took a fiver to document her o
by Eliza Huber
Amazon
These Are The Most Popular Halloween Costumes On Amazon
by Emily Ruane
Dedicated Feature
4 Easy Ways To Style The “It” Color Of Fall 2020
by Kim Duong
Style
Lingerie As Outerwear, The Fashion Trend That Took Over Instagram...
View this post on Instagram half dressed A post shared by Megan Adelaide Vega (@meganadelaide) on Sep 11, 2020 at 2:28pm PDT By now, we’ve all heard abou
by Eliza Huber
Dedicated Feature
A Family Reunion, A Fashion Show, & A Celebration Of Blackness: W...
Every October, historically Black college and university (HBCU) alumni flock to their alma maters to reunite with classmates, party in fierce fits, and che
by Taiia Smart Young
Style
Elevate Your Fall Wardrobe With These 21 Chunky Boots
by Eliza Huber
Fashion News
Madewell’s New Loungewear Is A Crowdsourced-Dream Come True
by Emily Ruane
Fall Fashion Guide
This Retro Fleece Trend Is Making Its Cozy Comeback
by Cortne Bonilla
Discover
R29 Stories & News
Watch
R29 Original Series & Films
Shop
R29's Most Wanted