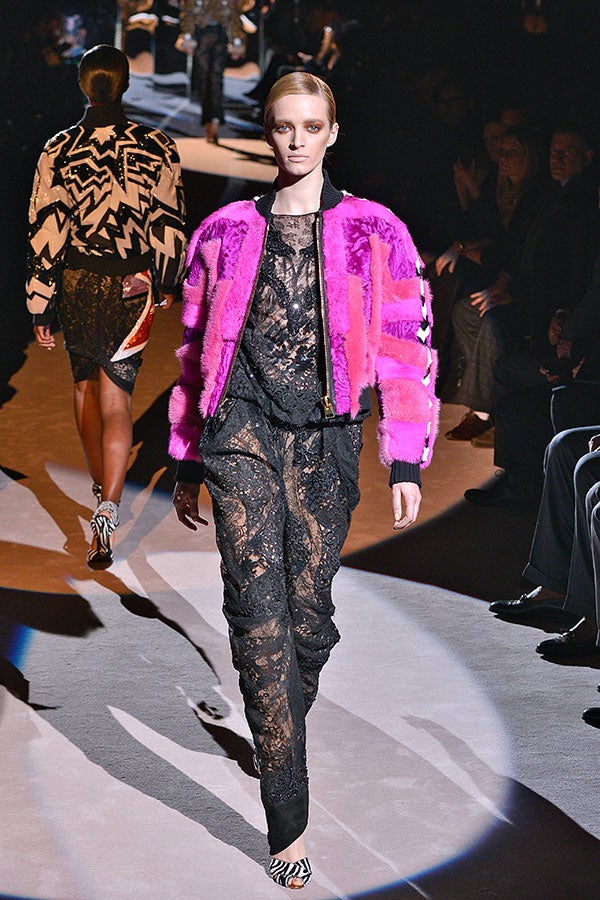 75 waiters in white jackets, all with identical haircuts, serving champagne; flaming torches; chandeliers and gilded ceilings. Yep, you're at a Tom Ford show. And it's no secret that Ford is a mastermind — a saucy, saucy mastermind. And, as WWD's Bridget Foley notes, "no one else in recent memory has steamed up the runway more convincingly than he." So, then why were critics less than loving of his latest show at London's Lancaster House? Or even worse, as Ford noted, why were they so silent?
He was disheartened by the lack of critical reaction. He tells WWD, "They were not 'Oh my God, those are the worst things I've ever seen,' but they also weren't 'Oh my God, that was great.' They were sort of old-fashioned reviews, like 'Well, there were pink jackets.'" From the designer's point of view, the clothes were too loud to have nothing said about them. Even an extreme negative reaction would have merited more integrity in his eyes: "The whole thing felt a little more silent than I expected it to, because the clothes are not silent." Indeed, the clothes included some serious '80s-inspired runway risks, which Ford dubbed "Cross Cultural Multi Ethnic." Now, there's a mouthful.
Advertisement
After a hiatus from the runway, we're not going to let one slipup have Tom pull a Ryan Gosling, leaving a gaping hole in our hearts and retreating back to whatever cave sexy people hide in when they're not out being fabulous.
Wanna know more? You can read the full interview here. (WWD)

Style
Berriez & Abacaxi Teamed Up For A Plus-Size Tie-Dye Collection Th...
Just in time for the weekend, Brooklyn-based plus-size vintage shop Berriez and NYC-based designer Sheena Sood of Abacaxi released a plus-size capsule coll
by Eliza Huber
Style
The UGG x Telfar Collab Is Almost Here — Here’s How To Order It B...
It’s been nine months since Telfar Clemens, the designer behind the viral Shopping Bag, announced the UGG x Telfar collaboration. Now, we finally have th
by Eliza Huber
Designers
Gossip Girl’s Reboot Will Feature A Christopher John Roger...
Gossip Girl’s reboot is almost here, and so are the memorable fashion moments. Though one may think it’s hard to match Eric Daman’s costumes on the o
by Frances Solá-Sant...
Advertisement
Style
This Instagram-Favorite Brand Is Launching Swimwear — & It Includ...
On Thursday, Instagram’s favorite brand Miaou, known for its dalmation-print corsets and low-rise kick flares, announced the launch of its first-ever swi
by Eliza Huber
Dedicated Feature
The Latinx-Owned, Sustainable Label That’ll Help You Break ...
Selva\Negra is one of 11 woman-led businesses nominated by Refinery29 for 99 Days of Design — a program working to empower small businesses through graph
by Danielle Naer
Designers
Alexander McQueen’s New Collection Features Anemone Prints & Punk...
Sarah Burton is looking to the healing power of nature for Alexander McQueen’s newest collection. On Tuesday, the British designer showed the fall 2021 l
by Frances Solá-Sant...
Designers
Halston Launched A Capsule Collection Inspired By The Netflix Show
The ‘70s are back in full swing this fashion season, no thanks to Halston. The American brand is launching a 10-piece capsule collection inspired by the
by Frances Solá-Sant...
Style
The First Kanye West Yeezy Gap Release Is Here — & You Can Pre-Or...
Update: According to Yeezy Gap, the Round Jacket is not sold out, after all. Waits may be long but hang tight, because the waiting room, found at Gap.com/Y
by Eliza Huber
Designers
Balenciaga’s Latest Runway Show Featured Gucci Accessories ...
Following the Gucci Aria show in March, which showcased Balenciaga-branded pieces on the runway, Demna Gvasalia is now taking a jab at the “Hacking Proje
by Frances Solá-Sant...
Fashion
25 Fashion-Forward Places To Buy A Wedding Dress Online
by Irina Grechko
Fashion
Coach’s Show Featured Printed Puffers – Plus J.Lo and Megan Thee ...
The puffer jacket got the retro treatment thanks to Coach. On Thursday, the American fashion house showed its winter 2021 collection in Shanghai, featuring
by Frances Solá-Sant...
Style
Birkenstock x Rick Owens Collab Includes A Shiny Version Of Every...
On Friday, German footwear brand Birkenstock released its third capsule collection designed in collaboration with American fashion designer Rick Owens. For
by Eliza Huber
Advertisement
Advertisement
Discover
R29 Stories & News
Watch
R29 Original Series & Films
Shop
R29's Most Wanted