Skip navigation!
Story from New York
Don't mess with the system — The Occupy system, that is. The lawsuit between Occupy Wall Street and the City of New York was settled yesterday for the sizable amount of $366,700. In November 2011, NYPD raided the OWS encampment in the Financial District's Zuccotti Park. During the late night bust, computers and the movement's collection of 3,600 books known as The People's Library were destroyed — and it appears that $47,000 of the settlement goes to the books alone. Another $50K is towards the damages the raid caused to Occupy's own Global Revolution TV's live stream equipment, while close to $10,000 will cover the ruined bicycle-powered generators from Times Up New York. Brookfield Properties, the company which owns Zuccotti Park, is throwing in some cash, too.
Advertisement
For two months, Occupy set up camp and protested from the heart of the Financial District. Norman Siegel, a lawyer for OWS, told The Village Voice his clients are pleased with the settlement. New York City's Law Department's own Sheryl Neufeld told The New York Times, "There are many reasons to settle a case, and sometimes that includes avoiding the potential for drawn out litigation that bolsters plaintiff attorney fees."
Money, however, wasn't just the focus of the lawsuit. If you're particularly fluent in judicial jargon, feel free to read the full settlement. The gist, we have figured, is that the city still doesn't admit fault, and the settlement is probably not the last we've heard of the Zuccotti incident. Siegel believes the settlement is about "constitutional rights and the destruction of books" — all things pertaining to Occupy's overriding (albeit convoluted) theme. Maybe this means you can't just throw money at people fighting for equality and expect them to back down. It takes a whole lot more than a monetary Band-Aid to heal an idea. (New York Magazine) 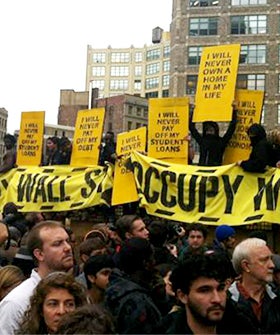 Photo: Courtesy of Occupy Wall Street.
Somos Latinx
Dear Miya Ponsetto, You Can Be Latinx & Still Be A Karen
Miya Ponsetto, the white woman dubbed as “SoHo Karen” on social media, was forcibly arrested in California yesterday. Her arrest comes after sh
by Jasely Molina
Food & Drinks
Is A Bagel Really A Bagel If It Isn’t In NYC?
by Elizabeth Buxton
New York
We Dig This NYC Dim Sum
by Camille Coklow
Beauty
The 17 Most Epic NYC Massages
by Kayla Jacobs
Movies
11 Movies Perfect For A Glorious Snow Day
by Vanessa Golembewski
New York
You HAVE To Try The Avocado Toast At These NYC Restaurants
by Elizabeth Buxton
New York
The Absolute Best Spots To Slurp Ramen In NYC
by Zoe Bain
New York
The NYC Rooftops You Need To Hit This Summer
by Elizabeth Buxton
Beauty
The Best Cheap Haircuts In New York City
Choppa style, for cheap.
by Liesa Goins
New York
The Indie Bride-To-Be’s Guide To Dress Shopping In NYC
by Ashley Castanos
New York
Is This Really What The NYPD Thinks About Rape?
NYPD captain Peter Rose has angered rape advocates after saying “acquaintance rape” cases are not as serious as rapes committed by strangers.DN
by Shannon Carlin
US News
Why This New York Subway Mural Of A Gay Couple Is So Important
The New York subway system is making headlines this week, with the opening of its long-awaited Second Avenue line. One of the new stations along that line
by Sabrina Rojas Weiss
Discover
R29 Stories & News
Watch
R29 Original Series & Films
Shop
R29's Most Wanted