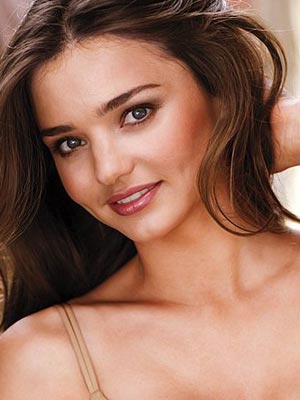 Rumors started swirling today that Miranda Kerr is being dropped from the team of Victoria's Secret Angels, due to her "difficult reputation." In response to these reports, we received the following statement from Victoria's Secret President and Chief Marketing Officer Ed Razek: "Miranda Kerr is one of the best models in the history of the business — and easily one of the most popular. She is also a consummate professional. Any rumors to the contrary are simply untrue. While her international commitments have kept her away from us more than we'd like over the past few years, she will always be an Angel to me. We have no plans to stop working with her. In fact, I've already invited her to walk the runway in this year's fashion show and, happily, she's agreed." Us Weekly, who originally reported the story, isn't putting much stock in Razek's words. Since the statement doesn't technically state that she's still an Angel, we're on the fence for now, but we have our doubts as to the validity of this rumor.
Advertisement
Maybe we were drawn in by the smile and the fact that she's married to Orlando Bloom (whose judgment we assume is as good as his looks...that's how things work, right?), but we always thought she seemed like a sweetheart. Having glimpsed her on occasion at press events, she always seemed gracious and friendly. But sources also say she hasn't been as big of a seller as fellow Angels Alessandra Ambrosio and Candice Swanepoel — also suspicious since, by all accounts, she's equally if not more popular.
StyleCaster astutely points out that this may have something to do with Kerr's outspoken views on the use of certain chemicals in manufacturing, something that's caused controversy for Victoria's Secret in the past. If the rumors are true, that may be part of it. But we think this story might just be making mountains out of molehills. When you're as big and as busy as Miranda Kerr, you don't really have the same kind of contract as other models. It's quite possible that, due to other commitments, she's transitioning to a per-event contract with the brand — which probably isn't as salacious as it sounds.