Skip navigation!
Story from Designers
Famed fashion designer and lover of prints, Lilly Pulitzer, passed away today at the age of 81. While the cause of death has not yet been confirmed, the industry is already missing the socialite's enchanting joie de vivre.
The Palm Beach-based designer began her career making printed dresses as a means to disguise orange juice stains — a genius move in our book – and soon gained popularity in the '60s for her cheery, eclectic designs. As the story goes, according to the New York Times, the pivotal movement was when Jackie Kennedy Onassis, a former classmate of Pulitzer's, wore one of the Florida designer's shift dresses in a magazine. It was a move that helped launch the Lilly Pulitzer brand into a huge success and placed the prints on the map. The line later expanded into a men's, children's, and home collection, as well.
Advertisement
Pulitzer married twice: First to Pete Pulitzer, and later to Enrique Rousseau, who passed away nearly 30 years ago — the same year she retired from her namesake label. While it was certainly Pulitzer's colorful, lively patterns that became synonymous with her name, she will also be fondly remembered for her life-affirming attitude. And, as a woman whose genius thinking turned a simple household solution into an entire business success, she'll also continue to stand as an inspiration that big, beautiful ideas can come from even the smallest places. (New York Times) 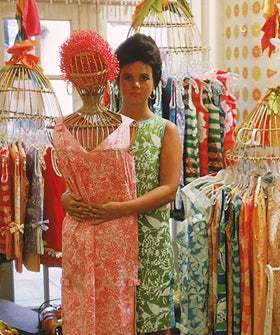 Advertisement
Maison Martin Margiela
The Dad Sneaker Now Has a Split Toe, Thanks To Reebok & Maison Ma...
The dad sneaker appears to be one trend that’s not going anywhere, anytime soon. And now, it’s getting a major update — a split toe, all thanks to a
by Sara Radin
Givenchy
Kaia Gerber’s Massive Givenchy Veil Is Destined To Be A Meme
It’s only a few weeks into 2020, and Kaia Gerber is already having an eventful year. Between brushing her teeth with her sunglasses on (can we talk about
by Sara Radin
Fashion Week
Prepare To See Jacquemus’ Latest Collection All Over Instagram
Simon Porte Jacquemus knows how to put on a show. His Spring 2020 presentation, set amongst a field of lavender flowers in the South of France, is proof of
by Eliza Huber
Dior
Judy Chicago Designed Dior’s Runway To Look Like A Birth Canal
Ever since Maria Grazia Chiuri began her tenure as the creative director of Dior in 2016, she’s routinely used the runway as a platform to speak about wo
by Sara Radin
Beyonce
Beyoncé’s Adidas x Ivy Park Collab Sparks Criticism From The Plus...
Following much excitement regarding Beyoncé’s Ivy Park collaboration with Adidas — it immediately sold out following its launch on Saturday, January 1
by Sara Radin
Best New Fashion Designers
Gap By Telfar Is The Most Perfect, Least Expected Pairing Of The ...
Gap — one of America’s most ubiquitous stores — and Telfar, one of its most provocative designers, have announced a partnership that is arguably the
by Sara Radin
Designers
Louis Vuitton Just Acquired The World’s Second Largest Diamond
Calling all Uncut Gems fans: Louis Vuitton is now the proud owner of the world’s second-largest rough diamond of all time. First discovered in a Botswana
by Sara Radin
Best of Netflix
Tan France & Alexa Chung’s New Fashion Competition Show Looks Ext...
Project Runway and The Great British Bake Off collide in the form of Netflix’s latest show, Next In Fashion, starring Queer Eye’s Tan France and model-
by Eliza Huber
Celebrity Style
Thanks To LOEWE, Megan Rapinoe’s Face Is All Over Paris
If you happen to be in (or heading to) Paris in the coming months, prepare for a very special welcome. Sure, you can check out the Eiffel Tower, the Louvre
by Eliza Huber
Designer Collaborations
Carolina Herrera Is Now Selling Plus-Size Options On 11 Honoré
It might be Carolina Herrera’s 81st birthday today, but it’s not the Venezuelan designer who’s getting a gift — we are. This week, the designer lab
by Eliza Huber
Best Plus-Size Wedding Dresses
Ashley Graham’s Pronovias Bridal Collection Is Size-Inclusive & G...
by Eliza Huber
Fashion
Max Mara’s Latest Campaign Was Inspired By Phoebe Waller-Bridge’s...
James Bond has a very specific uniform: Classic tux, Vesper martini, Aston Martin DB5. But 58 years and 26 movies later, Italian fashion brand Max Mara was
by Eliza Huber
Discover
R29 Stories & News
Watch
R29 Original Series & Films
Shop
R29's Most Wanted