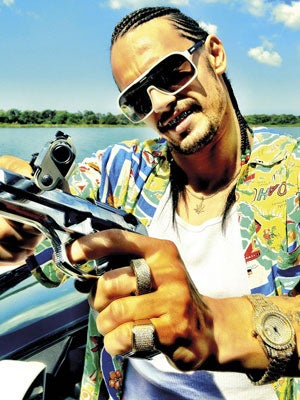 When we first saw James Franco on the set for his indie film Spring Breakers, we'll be honest: We thought he was Kevin Federline. The bad tattoos, the garish bling, and the cornrows definitely harkened back to the days of Britney and Kevin. But then we heard that Franco, for his role as a gun-toting, drug-dealing thug with a heart of gold, was channeling Houston rapper Riff Raff — which made sense because the two are homies, and Riff Raff is known for his intricate and labyrinthine cornrows. (Franco has since explained his portrayal is inspired by a rapper named Dangeruss, but the braids are totally Riff Raff-esque.)
Though he's endured shooting a grueling Oscars and being stuck in a crevice for 127 Hours, his character's hair particularly irked Franco. “Cornrows are very uncomfortable, and anyone that’s had them is a part of a club. Everybody will say, ‘The itch! Yeah, right?” Not only were Franco's cornrows itchy, but they were pretty intense too, with multi-directions and spirals, which were apparently important for the look. "Harmony really wanted to get the look of the character down,” Franco told us. "He wanted it as authentic as possible." Which means, of course, "the itch" had to be included.

Hair
I Got My Damaged Hair Color Corrected — & This Is The Result
The creative possibilities are endless when it comes to coloring your hair at home, and even when the finished look is exactly what you wanted, you’l
by Sydney Clarke
Hair
Under-$20 Shampoo & Conditioners The Pros Actually Swear By
by Lexy Lebsack
Hair
7 New Drugstore Launches That’ll Save You Money & Bad Hair ...
by aimee simeon
Hair
I Got A ’70s-Inspired Curly Shag & This Is What It Looks Like
Whoever said the curly shag wasn’t here to stay lied. The tousled chop is still a popular request in salons, and it’s exactly the look that Jos
by aimee simeon
Hair
Since I Stopped Making These 7 Mistakes, My Hair Has Never Felt H...
by Jacqueline Kilikita
Hair
I Chopped Off 10 Inches Of Hair & My Curls Have Never Looked Better
Ask most people with curly hair and they’ll tell you: A good haircut makes a huge difference in the overall health and appearance of your curls — e
by aimee simeon
Beauty
I Got A Scalp Facial & It Cured My Chronic Dandruff
If you’re familiar with the tenderness and general discomfort of a dry, itchy, flaky scalp that seems to get exponentially more painful and obvious i
by Megan Decker
Hair
It’s Deeper Than The Bonnet: The Ever-Present Expectations ...
When doing our hair for the office is off the table, how much of our natural hair routines do we keep under wraps?
by Sydney Clarke
Beauty
21 Protective Styles Perfect For Transitioning To Natural Hair
by Us
Hair
7 Top-Rated Conditioners That Are Like A Long Drink Of Water For ...
by Megan Decker
Hair
4 Hair-Color Trends That Will Be Huge In 2021
by Megan Decker
Hair
I Got A Moody Grey Weave To Channel My Inner Witch
Instant gratification is an unrealistic expectation with most things in life, but when it comes to hair, wigs and weaves are arguably the quickest, easiest
by aimee simeon
Discover
R29 Stories & News
Watch
R29 Original Series & Films
Shop
R29's Most Wanted