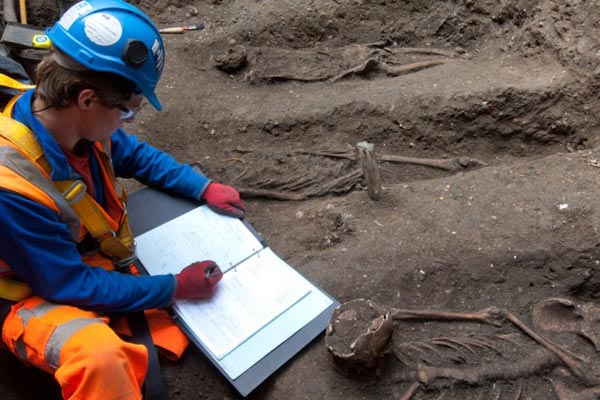 Yeah, probably. Lately, our fair city has been plagued by a rash of frightening discoveries. Just the other day during construction on the city’s Crossrail project, workers excavated a pit filled with 13 bodies (and counting!) of poor souls who may have been victims of the Black Plague during the Middle Ages (or pirates, one can never be sure). Not a total shock, mind you. London was hit hard by the disease. Still, it's not exactly the most pleasant surprise, is it?
Regardless, unearthed ancient relics are becoming quite the common thing in these parts. Last month, Roman remains were dug up underneath the London Bridge Station. Around the same area, a bathhouse was discovered just two years prior. Oh, and let's not forget last year’s discovery of 300 bodies believed to be inmates of the former Bedlam Hospital. So creepy.
Now we can’t help but wonder, but did those happy moments when we bought our Burberry trenches, McQueen frocks, and Topshop accessories all take place atop of mass graves? Is London’s constant underground construction disturbing the spirits beneath? Is that why the lights keep flickering in our offices? Hold us. (The Atlantic Cities)

News
The Pandemic Of Black Trauma Will Never End
White people talk about how they can't wait for things to "get back to normal." But the past two months have shown "normal" still includes the murder of Bl
by Kathleen Newman-B...
Global News
The Danger Of Being A Black Woman In Brazil
Fighting racism and patriarchy in Brazil: Can women’s movements in Brazil fight against nationalism, racism, and patriarchy to save women’s health and
by Refinery29
Living
17 Feminist Quotes To Share & Inspire For International WomenR...
by Nadia Ebrahim
Global News
Why These Children Are Getting Married Off At 14
Women and girls represent half of the world’s population, and yet, we are fighting for gender equality. Despite it being a fundamental human right, w
by Jessica Morgan
World News
Fighting For LGBTQ+ Rights In Georgia
In an episode of new YouTube docuseries Fundamental, LGBTQ+-rights activists in the country of Georgia discuss the challenges of their nascent movement. &#
by Natalie Gontcharova
Global News
The Danger Of Being A Black Woman In Brazil
The final scene of episode two of docuseries Fundamental shows Brazilian human-rights activist Lucia Xavier walking through a cemetery. Solemnly roaming th
by Kathleen Newman-B...
Homepage
The Perils Of Having Sex When You Live With Your Parents
The housing crisis has left a record number of young adults stuck living in the family home. According to official figures, a quarter of people aged 20-34
by Natalie Gil
World News
Prince Andrew Speaks Out On Jeffrey Epstein & Allegations Of Assa...
Prince Andrew broke his silence on Jeffrey Epstein and accusations of underaged sex in a new BBC interview. In the sit-down, which will air in full on Satu
by Shannon Carlin
News
Mother Of Teen Who Was Murdered By Her Ex-Boyfriend Calls Killer ...
In August, 18-year-old Thomas Griffiths pleaded guilty to murdering his 17-year-old ex-girlfriend, Ellie Gould, in her Wiltshire home in southwest England.
by Lydia Wang
News
Ex-Boyfriend Of Russian Instagram Influencer Ekaterina Karaglanov...
A Russian Instagram influencer who was found dead last week was murdered by her ex-boyfriend, who has confessed to the crime. Ekaterina Karaglanova’s bod
by Alejandra Salazar
News
Melania Trump’s Wooden Statue Gets Mixed Reviews From Twitter & H...
While Americans were busy celebrating the Fourth of July, Slovenia was busy honoring America’s first lady. Her home country did this with help from a woo
by Shannon Carlin
News
As Sudan Faces Political Upheaval & A Food Crisis, Here’s How To ...
Sudan has been in a state of crisis since early April, when civilians opposing dictator and war criminal Omar al-Bashir finally ousted him from the governm
by Lydia Wang
Discover
R29 Stories & News
Watch
R29 Original Series & Films
Shop
R29's Most Wanted