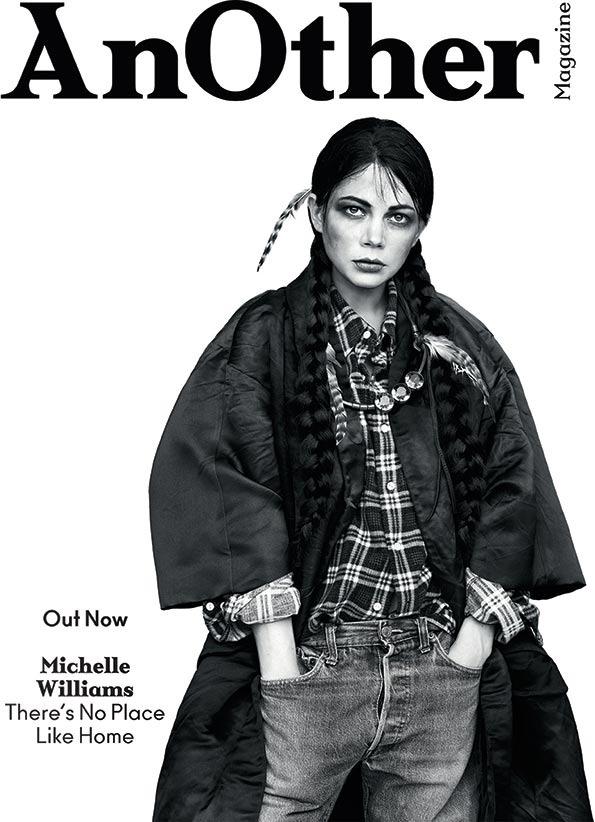 Was there some secret media conference we weren't invited to where everyone decided that 2013 is the year to be really, really offensive in very public forums? First, there was Numéro's awful "African Queen" editorial, and now this: Michelle Williams appears on the cover of AnOther magazine in what Jezebel rightly calls Redface.
This is shocking, not in the least because Michelle Williams is someone we respect. Of course, this cover probably wasn't her idea, but it's hard to imagine she didn't see what was going on here. Before you jump the gun and say this isn't an imitation of Native American dress and physicality, let us point out a few things. Michelle Williams currently has a blonde pixie cut. So it's not like they just braided her hair coincidentally. They added super-long, thick, black extensions and braided them — and darkened her eyebrows. Then there's the makeup. The photo is in black-and-white, so you can't tell for sure if they've altered her normally fair skin, but there is some definite contouring around the nose and the cheekbones that not only makes her look nearly unrecognizable, but also appears to mimic the stark relief of facial features often seen in early portraits of Native American women. The same mimicry applies her stoic, unsmiling pose — also a typical trope in that particular genre and period of art history.
Advertisement
The worn jeans, plaid shirt, beads, and feathers only serve to deepen our concern and reinforce the fact that this is no accident. Plus, the tagline "there's no place like home" is actually very pointed in this instance, given the fact that thousands of Native Americans were forcefully ousted from their homes (not to mention slaughtered and denied full rights of citizenship) when European settlers came to this continent. The line is, of course, a reference to Ms. Williams' recent role in Oz The Great And Powerful, but if that's all they meant, they should have just dressed her up as Dorothy.
Plus, the reference to Oz actually makes things worse. It trivializes something tragic and serious. And, as Ruth Hopkins points out, L. Frank Baum (author of the original The Wonderful Wizard of Oz) was an outspoken racist who called for the literal "annihilation" of Native Americans in an editorial for the newspaper where he worked in December of 1890, just days before the Wounded Knee Massacre.
Pretty much the only thing we can do here is balk. Why was this produced and published? Who approved this idea? On what planet is this okay or called for, by any measure? Though it doesn't usually change anything, when creative imagery is found to be offensive by the public, artists usually say something about how political correctness shouldn't interfere with the direction of their art. But what's particularly ridiculous about this photo is that we can't imagine what lofty artistic goal could possibly call for this kind of offense against a people who are still marginalized in many ways today. Whatever it may be, we're not interested.

Photo: Courtesy of AnOther Magazine.