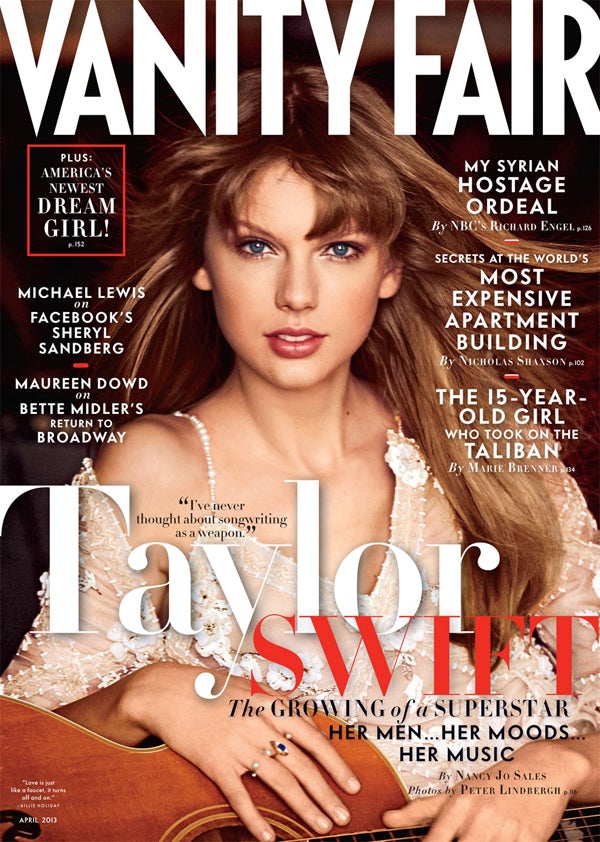 We have no beef with Taylor Swift. She's a young girl doing her thing in the spotlight, she seems committed to her work, and sends (for the most part) a positive message — though we do take issue with the rhetoric behind a few of her songs. And we agree with her that the constant speculation on her love life, the never-ending tabloid claim that she's a stage-five clinger and serial dater with a million boyfriends at any given moment, are a bit ridiculous. The singer said it outright in the upcoming issue of Vanity Fair: “For a female to write about her feelings, and then be portrayed as some clingy, insane, desperate girlfriend in need of making you marry her and have kids with her, I think that’s taking something that potentially should be celebrated — a woman writing about her feelings in a confessional way — that’s taking it and turning it and twisting it into something that is frankly a little sexist.”
Advertisement
What we do have some beef with — or perhaps confusion is the better word — is the Vanity Fair cover story and the shadiness of it all. According to this advance preview of the article, which will appear in full in the April 2013 issue, "one of Swift’s rules is that she doesn’t go into the personal details of any of her relationships." And yet, the singer "authorized someone to discuss them with [article author Nancy Jo] Sales." That somebody is an unnamed source who goes into detail about her breakup with One Direction member Harry Styles, a source who sounds a lot like the usual anonymous "close friends" you meet while waiting in the grocery store checkout aisle.
Swift also criticized Tina Fey and Amy Poehler for bringing up her much-discussed love life during The Golden Globes, referencing a phrase brought to her attention by Katie Couric: "There’s a special place in hell for women who don’t help other women." The Hollywood Reporter reached Poehler for comment, and she offered the following: "Aw, I feel bad if she was upset. I am a feminist, and she is a young and talented girl. That being said, I do agree I am going to hell. But for other reasons. Mostly boring tax stuff."
Aside from her supposed many relationships (though Swift points out she's only had two since 2010), Swift's choice of real estate has also been tabloid fodder of late. On the subject of her speculated home purchase right next door to former boyfriend Conor Kenedy, she explains, “People say that about me, that I apparently buy houses near every boy I like — that’s a thing that I apparently do. If I like you I will apparently buy up the real-estate market just to freak you out so you leave me.” And then Vanity Fair goes on to report that actually, yes, she did buy the house. We get that Swift is talking about the exaggeration to which gossip magazines are so prone, but it seems like this magazine in particular is trying to create a little extra drama. We won't make any judgment calls until we've had a chance to check out the full article, but trust us, when it hits newsstands, we'll be reading with a particularly close eye.