Skip navigation!
Story from Fashion
Casey Legler competed as a swimmer in the 1996 Summer Olympics when she was 19. Now, the 6'2" former Olympian is focusing on her modeling career. Yet, Legler isn't a traditional model, but one who has been signed to Ford to work exclusively as a male.

Legler's story has interested us before, but her current interview with
The Guardian
about the fluidity and performance of gender rejects the claim of androgyny as a "trend" right in its tracks. "I'm not androgynous," she explains, "There is no ambiguity with me." Legler's goal is particularly political. "I am the person who has to introduce this. They want to shoot me because I have a narrative, and implicit in that is a conversation."

Advertisement
While gender permutation is certainly not a new "trend" in fashion — think Bowie, Virginia Woolf, or even the wig-wearing 18th century men — allowing for models, the blank slate on which clothing is displayed, to join in the conversation is certainly a new moment. The Guardian features an interesting quote from Leeds University professor Ruth Holliday. "Models like Casey Legler and Andrej Pejic can be political because the ways in which they make us believe in the gender they perform shows us that all gender is performance." To further her statement, when gender is a performance, the signifiers of identity (in this case, clothes and make-up), become part of the performance too. Elevating the model conversation doesn't just bring up Judith Butler-esque ideas about self, but it also reminds us that fashion is an art and those who think about it critically (like Legler) can be truly groundbreaking artists. 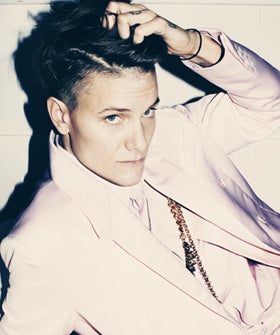 Deals
47 Free People Hidden Sale Gems That Are Perfect For Layering
by Mercedes Viera
Fashion
9 Plus-Size Sweater Dresses That’ll Keep You Warm And Chic ...
by Eliza Huber
Fashion
Tracksuits Are Trending — Here Are 13 Sets To Get You Started
by Frances Solá-Sant...
Advertisement
Hype Machine
The Best Parkas Most Loved By Chic, Sub-Zero Folks
Columbia Peak to Park Mid Insulated Jacket, $119.99 The Classic (And Vegan) Black ParkaThis can’t-go-wrong puffer has a water-resistant outer shell,
by Jinnie Lee
Deals
Thanks to Lookfantastic’s Sitewide Sale, You Can Get 15% Of...
It’s no secret that cold air can dry out your skin, leaving it redder, flakier, or itchier than ever, making right now the perfect time to update you
by Mercedes Viera
Deals
Last Chance To Score A LELO Vibrator For Up To 25% Off
You thought we were done with sex toy-centric sales? If you still haven’t taken advantage of all the deals that have come (wink wink) and gone, now&#
by Mercedes Viera
Online Shopping
7 Plus-Size Slacks To Dress Up Or Down This Fall
by Chichi Offor
Deals
It’s Who What Wear Collection’s Birthday, So You Get ...
Is your closet craving some new stylishly elevated basics? You’re in luck because Who What Wear Collection, the fashion editors’ choice for hig
by Mercedes Viera
Shopping
R29’s Shopping Team Reviews Free People’s Previously ...
Over the summer, we noticed an unassuming Free People FP Movement puffer that was selling out like hotcakes (we repeat, over the summer). The quilted nylon
by Jinnie Lee
Designer Collaborations
Fendi & Skims’ Collaboration Includes Puffer Coats & Logo Loungewear
by Frances Solá-Sant...
Fashion
Butterflies Are Back In Fashion. How To Wear The Y2K Trend As An ...
In the past year, designers and creators have been hard at work digging through the Y2K fashion archives to bring back trends like low-rise jeans, belly ch
by Frances Solá-Sant...
Plus-Size Fashion
The Best Fall Dresses Plucked From Anthropologie’s Plus-Siz...
by Chichi Offor
Advertisement
Advertisement
Discover
R29 Stories & News
Watch
R29 Original Series & Films
Shop
R29's Most Wanted