Skip navigation!
Story from Designers
Marc Jacobs says "glamour and sex sells just about everything” — and that's the same method he's applying to his new job as creative director of Diet Coke. The internationally renowned designer is creating a "whimsical, feminine" new packaging for the no-cal soda's 30th anniversary in Europe, and was generous enough to throw in a topless photoshoot, too!
The designs will be revealed later this month, but WWD reports they'll be "colorful and fun," reflecting empowering female imagery from the past three decades. (Which is a little more approachable than the oddly malnourished King Karl-designed bottles of '11.) Jacobs' photos, shot by Stéphane Sednaoui, are all we have to go on for now, but you can soon expect to see them everywhere from billboards to your favorite corners of the internet. If you're wondering how he keeps his bod looking that good, it might be due to his to a very, erm, modest two to three sodas per day. “I still think it’s hysterical people want me to take my shirt off. You know, I’m going to be 50 in two months, so I guess I should be glad,” he said. “It feels like the decade of me taking my shirt off.” Cheers to keep that going — and, if we're good, maybe he'll star in one of those '90s-style hunky Coke commercials. 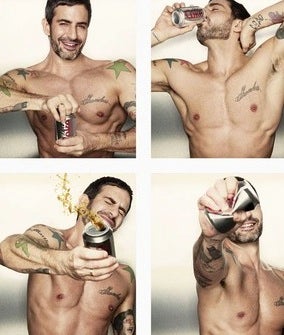 Designers
How Amanda Forastieri Is Helping Revive Puerto Rico’s Garment Ind...
Even before launching her namesake brand earlier this year, Puerto Rico-born designer Amanda Forastieri has used fashion as a tool of political and cultura
by Frances Solá-Sant...
Style
Skims’ Sold-Out Swim Collection Is Coming Back — Is It Wort...
When the debut Skims Swim collection launched in March, it didn’t take long for the entire swimwear line to sell out. This was not entirely surprisin
by Irina Grechko
Designers
“Virgil Abloh: ‘Figures Of Speech’” Exhibit Invites Viewers To “Q...
Question everything: This was the motto of the late fashion designer Virgil Abloh. It was also the thought running through my head as I walked through the
by Irina Grechko
Advertisement
Designers
Why This Jellyfish-Like Silhouette Is My Style Go-To
Post-college, I was in dire need of a paying job while attempting to pursue an editorial career and it just so happened that the Pleats Please Issey Miyake
by Diana Tsui
Designers
Why You Won’t See Rainbows In This Gender-Affirming Brand’s...
When the founders of Urbody — a brand making affirming active- and underwear for trans, nonbinary, and gender non-conforming people — set out to create
by Lindsay Lee Wallace
Designers
The New Christopher John Rogers Runway Show Was Worth The Two-Yea...
Even before the Christopher John Rogers show began, the unabashedly optimistic styles by the Louisiana-born, New York-based designer were on full display.
by Irina Grechko
Fashion
How Chromat Is Revolutionizing Swimwear
Becca McCharen-Tran is waiting for a call from DHL. The samples from Chromat’s Spring 2022 collection of inclusive swimsuits — for trans femmes, n
by Carli Whitwell
Style
Costume Institute’s New Exhibit Highlights American Fashion’s Ove...
What is American fashion? A little less than a year ago, the Metropolitan Museum of Art’s Costume Institute began to answer this question with the “In
by Irina Grechko
Best Wedding Dresses
Meet The Bridal Designers Behind Some Of Today’s Coolest We...
Welcome to Aisle Style, a week-long series that features the most untraditional wedding fashion trends, bridal designers behind the coolest wedding lo
by Fawnia Soo Hoo
Designer Collaborations
Iris Apfel x H&M Is Here — Here’s How The Style Icon Wants You To...
by Irina Grechko
Designers
Alexander McQueen Returned To NYC After 20 Years With A Nature-In...
There was a lot of talk about mushrooms ahead of the Alexander McQueen Fall 2022 fashion show. As soon as teasers began to quite literally sprout in the fo
by Irina Grechko
Black History Month 2022
Ruth E. Carter Is Black History, Present, And Future
R29Unbothered continues its look at Black culture’s tangled history of Black identity, style, and contributions to the culture with ROOTS, our annual Bla
by Venesa Coger
Advertisement
Advertisement
Discover
R29 Stories & News
Watch
R29 Original Series & Films
Shop
R29's Most Wanted