Skip navigation!
Story from Celebrity Style
It looks like the fruits of Ashton Kutcher’s labor aren’t paying off quite the way he anticipated. The actor, who is playing Steve Jobs in the much-yapped-about biopic jOBS, recently revealed he was admitted to the hospital just a few days before shooting. According to Techcrunch, Kutcher apparently attempted to mimic the exclusive fruit-and-nut diet that Jobs famously favored, resulting in an inordinate amount of pancreatic pain (which the actor noted was slightly eerie…"considering everything”).
But, despite Kutcher’s method-acting attempts, he’s not exactly garnering standing ovations from the Apple camp. Steve Wozniak expressed his disdain for the actor's portrayal of his late business partner (or at least the inaccurate story line he was reading from) in one just-released clip, telling Gizmodo it was "not close" and "totally wrong." Well, we will have to wait until we see the film in its entirety before we make any hasty decisions, but until then — this entertaining picture of Kutcher in a belly shirt and Birkenstocks will have to suffice. (Techcrunch) 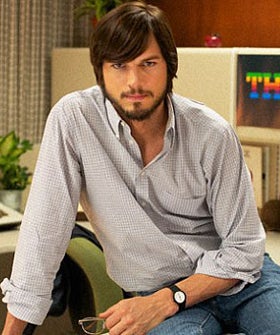 Style
9 Celebrity Outfits To Inspire Your Memorial Day Weekend Looks
by Eliza Huber
Style
7 Meghan Markle-Approved Fashion Brands That Are Also Affordable
by Eliza Huber
Style
Olsen Twin Sets The Bar For Social Distancing Style
From their pastel-colored lenses and bandanas circa 2000 to the black shapeless frocks they’re known for today, the Olsen twins have been our style icons
by Eliza Huber
Style
Meghan Markle’s Go-To Dress Is 50% Off At Nordstrom
We’ve learned every TikTok dance, box-dyed our hair pastel pink, and watched all 12 episodes of Normal People — twice. Next on our list of distractions
by Eliza Huber
Fashion
Villanelle Is A Carrie Bradshaw For Our Disillusioned Generation
Sex and the City’s Carrie Bradshaw walked so Killing Eve’s Villanelle could run. Sure, Bradshaw can be considered a predecessor to many of TV’s antih
by Cait Munro
Style
Meghan Markle Just Gave This ‘90s Jewelry Trend Her Stamp Of Appr...
Summer is almost here, and with it, comes all of our favorite kitschy, nostalgic accessory trends: seashell jewelry, fruit-shaped handbags, rhinestone-crus
by Eliza Huber
Style
Here’s What You Would’ve Seen On The Met Gala Red Carpet Last Night
by Eliza Huber
Celebrity Style
Meghan Markle’s Baseball Cap Marks The Beginning Of A New Era
It’s only been a month since Meghan Markle and Prince Harry swapped out their Sussex digs for a house in the Hollywood Hills, but they already look like
by Eliza Huber
Style
Pillows For Spring: Groundbreaking
If you, like us, have been receiving near-constant reminders from your phones that screen time is at an all-time high, you’ve probably already caught a g
by Eliza Huber
Celebrity Style
Meghan Markle’s Go-To Pumps Are 50% Off
If we had to guess the last thing on your mind right now, we would likely say high heels. After all, when your days consist of traveling from your bed to t
by Eliza Huber
Fashion
Rihanna’s New Fenty Capsule Collection Is Full Of Power, Strength...
Bad news: the wait for Rihanna’s next album continues. But, Riri is dropping some other new stuff while we’re under quarantine. On Instagram, she revea
by Alexis Reliford
Celebrity Style
We Can’t Stop Thinking About Julia Garner’s Wedding P...
With the global pandemic causing the majority of the fashion industry to hit pause, it’s hard to imagine what trends will look like in the seasons to com
by Eliza Huber
Discover
R29 Stories & News
Watch
R29 Original Series & Films
Shop
R29's Most Wanted