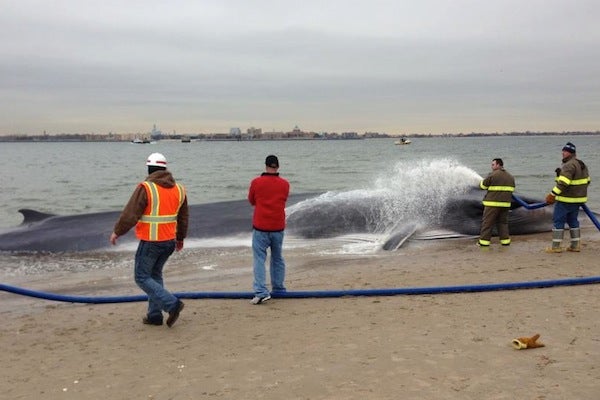 Environmentally speaking, this has not been a great year for the NYC metro area. Floods, blizzards, unseasonal warmth, Hurricane Sandy, and now this: An emaciated (read: 60-80 ton) Fin whale was found this afternoon beached in Breezy Point, Queens (one of the worst places to be post-Hurricane Sandy, you may recall).
Firefighters and marine biologists are on the scene, but as the tide rises, there's less and less they can do. The whale has no injuries and seems to be "calm," though nobody's quite sure why it ended up there (though probably, judging by its weight, it's suffering from some natural illness). While rescuers are doing all they can, the truth is, that when a whale this large is beached, it usually ends in death — naturally or by euthanasia. Either way, though, it's not a simple matter. In some areas, a beached whale can be buried, but if you've ever driven past Greenwood Cemetery, you know such space is in high demand. As biologist Mendy Garron told The New York Times, “it can be a logistical nightmare in some cases." Very sad, but it seems all we can do is hope this big guy doesn't suffer too much or too long.