Story from New York
With the devastating aftermath of Hurricane Sandy, everyone has been joining the effort to provide support and relief to those affected. No single individual has been so surprising with his benevolence, however, as the self-described “Secret Santa” who roamed the streets of New Jersey and Staten Island forcing $100 bills into the hands of strangers last week.
Yes, you read that sentence correctly.
Surrounded by an entourage of cops, an anonymous Missourian brought some Kansas City kindness to New York as he handed out cash to people in need at food pantries and Salvation Army stores. Apparently, this seemingly unique act is actually one in a long line of similar gestures. The original Secret Santa, Larry Stewart, was known for his holiday generosity in Kansas City. After Stewart passed away in 2007, our new friend decided to carry on the tradition, even extending his reach to the east coast.
Somewhat crazy or super inspiring? Either way, there's no doubt this guy is pretty wonderful. (NYMag) 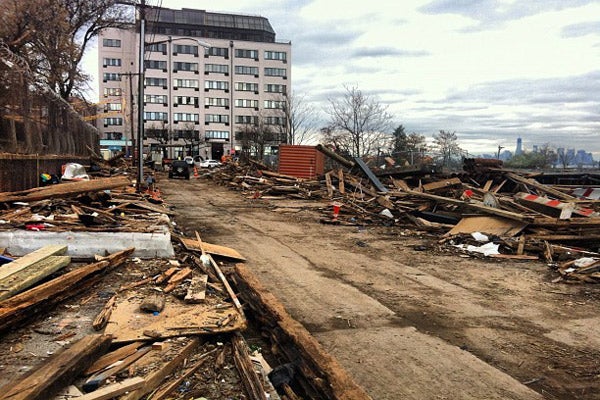 Photo: Courtesy of Nadine Hill
Food & Drinks
Is A Bagel Really A Bagel If It Isn’t In NYC?
by Elizabeth Buxton
New York
We Dig This NYC Dim Sum
by Camille Coklow
Beauty
The 17 Most Epic NYC Massages
by Kayla Jacobs
Movies
11 Movies Perfect For A Glorious Snow Day
by Vanessa Golembewski
New York
You HAVE To Try The Avocado Toast At These NYC Restaurants
by Elizabeth Buxton
New York
The Absolute Best Spots To Slurp Ramen In NYC
by Zoe Bain
New York
The NYC Rooftops You Need To Hit This Summer
by Elizabeth Buxton
Beauty
The Best Cheap Haircuts In New York City
Choppa style, for cheap.
by Liesa Goins
New York
The Indie Bride-To-Be’s Guide To Dress Shopping In NYC
by Ashley Castanos
New York
Is This Really What The NYPD Thinks About Rape?
NYPD captain Peter Rose has angered rape advocates after saying “acquaintance rape” cases are not as serious as rapes committed by strangers.DN
by Shannon Carlin
US News
Why This New York Subway Mural Of A Gay Couple Is So Important
The New York subway system is making headlines this week, with the opening of its long-awaited Second Avenue line. One of the new stations along that line
by Sabrina Rojas Weiss
New York
7 Last-Minute Places To Eat Out If You’re In NYC On Thanksg...
For some New York City residents, “heading home for the holidays” means taking the 1 train back uptown to a tiny apartment and cooking a festiv
by Elizabeth Buxton
Discover
R29 Stories & News
Watch
R29 Original Series & Films
Shop
R29's Most Wanted