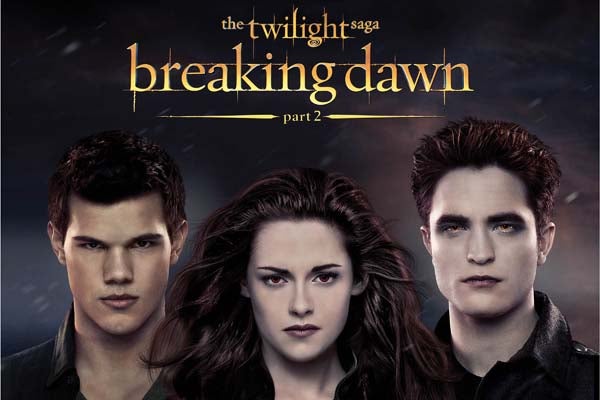 We're certain everyone is already counting down the days until the final installment of The Twilight Saga, which is, now, less than one month away. The highly anticipated Breaking Dawn Part 2 release on November 16 will mark the end of a joyful era, pre-Rupert Sanders. If all that surrounding Twilight drama is putting a damper on your thoroughly planned premiere party, sulk no more: Summit Entertainment has released the entire track listing for the film's final sound track. Your wintertime playlist is on its way. And as every Twi-hard fan knows, the sound tracks are usually just as good as the movies.
Advertisement
As part of Billie Joe Armstrong's rocky new album, Green Day provided the sound track's lead single with its new song "The Forgotten." On the band's decision to collaborate with the Twilight series, Green Day bassist Mike Dirnt said, "We readily agreed because the films are an insane cultural phenomenon...We have always been impressed with the way the Twilight soundtracks are so carefully curated." The series' past sound tracks have included songs by Grizzly Bear, Thom Yorke, and Bruno Mars.
The rest of the final sound track features artists like Feist, Passion Pit, and St.Vincent. Twilight actress Nikki Reed will also be making a musical appearance in a duet with hubby, Paul McDonald (aww!). The sound track will be released November 13, giving fans three days to start memorizing those lyrics and stocking up on tissues.

5. "Everything and Nothing," The Boom Circuits

Entertainment
The ‘Jennifer Lawrence Pipeline’ & The Impossible Standards For W...
Jennifer Lawrence is back. The Oscar winner who was once the self-deprecating crown jewel of the Hollywood scene has been moving in the shadows in the past
by Maggie Zhou
Unbothered
The 10 Best Black Corny Christmas Romances Of The Season
by Kathleen Newman-B...
Unbothered
Virgil Abloh & Chadwick Boseman’s Deaths Remind Us That Black Art...
“I don’t have to do nothin’ but stay Black and die.” This oft-repeated phrase in Black communities of a certain generation tells a story of people
by Gloria Alamrew
Advertisement
Unbothered
William Jackson Harper In Love Life Is The Chaotic But End...
I just can’t stop thinking about the new season of HBO Max’s Love Life. More specifically, I can’t stop thinking about William Jackson Harper in the
by Ineye Komonibo
Unbothered
Ari Lennox Has Been Arrested In Amsterdam
On Monday (November 29), R&B singer Ari Lennox was arrested by Dutch military police at Schiphol Airport. The authorities, who are responsible for over
by Ineye Komonibo
Black Friday
We’re Diving Headfirst Into These Black Friday Streaming Deals
When prepping our Black Friday and Cyber Monday shopping wishlists, lots of must-have items come to mind each year: big-ticket home items, covetable fashio
by Amanda Randone
Unbothered
Bruised Isn’t Great, But Halle Berry And Sheila Atim Are
Welcome to “What’s Good,” a column where we break down what’s soothing, distracting, or just plain good in the streaming world with a “rooting fo
by Kathleen Newman-B...
Somos Latinx
The Latinx Students of Bayside Want to Know Why Schools Don’...
Correction: An earlier version of this article referred to Castilian Spanish, which is the type of Spanish spoken among most Spanish-speakers around the wo
by Cristina Escobar
Unbothered
Black Selling Sunset Stans, It’s Our Time
When Netflix first dropped Selling Sunset, the world wasn’t sure of how interesting a series about the personal and professional lives of the agents of T
by Ineye Komonibo
Unbothered
King Richard May Be About Richard, But Its Strength Is Sho...
When Venus and Serena Williams first rocketed into the tennis stratosphere, no one could have imagined the indelible impact that the sister duo would have
by Ineye Komonibo
Unbothered
Two Men Convicted For The 1965 Assassination Of Malcolm X Have Be...
Nearly 60 years after the shocking assassination of civil rights leader Malcolm X, a new development in the investigation into his murder has led to t
by Ineye Komonibo
Entertainment
Sister, Sister: King Richard Stars Saniyya Sidney & Demi S...
Welcome to The Come-Up, where rising Gen-Z talent checks in on their way to the top. In this edition, we’re catching up with dynamic duo Saniyya Sidn
by Ineye Komonibo
Advertisement
Advertisement
Discover
R29 Stories & News
Watch
R29 Original Series & Films
Shop
R29's Most Wanted