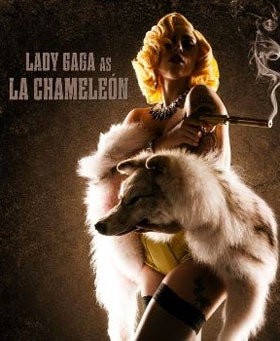 She's been a jailbird. She's designed a perfume. She's even got a Little Monsters social network. But, one of the things Lady Gaga has not dabbled in has been the celluloid world — until now.
While Robert Rodriguez (of exploitation film fame, like Planet Terror and Sin City) has been working on Machete Kills (the sequel to Machete) fairly openly, the director just tweeted that working with Gaga "kicked SO MUCH ASS!" Along with his quote, he featured a super-glam, B-movie style Gaga wearing a very un-PETA-friendly fox fur. Rodriguez has been known for casting strange options (Lindsay Lohan as a nun, for one), but Gaga's character, La Chameléon, hasn't been listed in the production notes. (Interestingly enough though, El Chameléon has, and the character is played by Cuba Gooding Jr. It's okay. We get the two confused a lot, too.) Other stars include Sofía Vergara, Jessica Alba, and a whole slew of scandal-saturated stars, like Charlie Sheen, Mel Gibson, and Michelle Rodriguez.
After her very Rodriguez-esque "Telephone" video (which payed homage to Kill Bill with the "Pussy Wagon," a film directed by Rodriguez compatriot Quentin Tarantino), Gaga moonlighting with a skilled B-movie-inspired director makes a whole heck of a lot of sense. With her Tisch background and over-the-top performances, it's no surprise the singer is up for a few cameos. Is it cray that we were kind of hoping she'd play Joanna Mason in The Hunger Games? Just thinking out loud, here.

Unbothered
Jennifer Hough’s First On-Air Interview About Nicki Minaj &...
*Editor’s note: this story contains discussions about sexual violence, threats, and intimidation. Please read with care.  A month after publicly all
by R29 Unbothered
Unbothered
CBS Will Now Turn Its Controversial Activist Competition Series I...
Updated September 16, 2021: After a wave of backlash followed the announcement of its controversial new series, CBS is going back to the drawing board to r
by DarkSkyLady
Unbothered
Megan Thee Stallion Wins Two Big Legal Victories — Against Her La...
Megan Thee Stallion scored two major legal wins this week, after a judge granted her the go-ahead to release the remix of BTS’ Butter that she is feature
by Tayo Bero
Advertisement
Unbothered
American Idol Alum Syesha Mercado Is Still In The Midst Of...
Singer and American Idol alum Syesha Mercado has regained custody of one of her two young children who were taken from her by authorities in Florida. Merc
by Tayo Bero
Unbothered
The Woman Assaulted By Nicki Minaj’s Husband Is Setting The Recor...
*Editor’s note: this story contains discussions about sexual violence, threats and intimidation.  Jennifer Hough —  who was assaulted by Nicki Minaj?
by Tayo Bero
Entertainment News
What You Need To Know About R. Kelly’s Trial That’s B...
This story contains discussion of sexual violence. Please proceed with care. On August 18, singer and producer R. Kelly will finally face trial for a litan
by Natalie Morin
Entertainment News
‘Self-Made Legend’: Lil Nas X On Being A Gay Icon And...
Lil Nas X has had an amazing year but like anyone in the early stages of a career on the rise, the journey hasn’t come without its share of struggles, do
by Tayo Bero
Entertainment News
Britney Spears’ Dad Is Finally On His Way Out Of Her Conservatorship
In a surprising and sudden development in Britney Spears’ ongoing conservatorship battle, her father has finally decided to step down from her conservato
by Natalie Morin
Unbothered
Beyoncé Talks Dangers of Dieting, Protecting Her Peace And Mindin...
Beyoncé is on the cover of Harper’s Bazaar’s September 2021 issue. In the feature, the usually-private superstar shares some of the lessons she’
by Tayo Bero
Unbothered
Dr. Dre Is One Of Hip-Hop’s Wealthiest Men — But His Daughter & G...
LaTanya Young, the eldest daughter of music mogul Dr. Dre, has revealed that she and her four children are homeless and haven’t gotten a dime from her mi
by Tayo Bero
Unbothered
Rihanna Is The Only Billionaire Allowed To Exist
Rihanna is officially a billionaire. According to Forbes, Rihanna is now worth $1.7 billion — making her the richest female musician in the world and the
by Tayo Bero
Unbothered
When Will Michael Che Face Consequences For Punching Down On Blac...
SNL host, writer and comedian Michael Che is showing zero remorse for crude comments he made about gymnastics legend Simone Biles, after she withdrew from
by Tayo Bero
Advertisement
Advertisement
Discover
R29 Stories & News
Watch
R29 Original Series & Films
Shop
R29's Most Wanted