Skip navigation!
Story from Makeup
We've never tried to hide the fact that we have a bit of a crush on Catherine, Duchess of Cambridge, and a lot of that has to do with the fact that she's just so down to earth. She shops at Zara just like us! She recycles outfits! She even buys her own groceries! Like we said, #girlcrush. One thing we don't have in common? A $37,728 beauty budget. Yeah.
Joanna Douglas, the senior beauty editor at Yahoo! Shine, came up with this number after researching the Duchess' grooming habits. For example, Catherine has been known to like Karin Herzog's skin care products, which would run her about $848 a year if she buys her favorite items once every three months. Think that's a lot of dough? Well, about half of her estimated budget — a whopping $18,760 — is spent solely on cuts, color, keratin treatments, and Kérastase conditioning treatments for those glossy, luscious locks. Suddenly that $8 bottle of shampoo you hesitate over at the drugstore doesn't seem so bad, does it?
Advertisement
Look, we're not ragging on Catherine for having a fancy-schmancy beauty regimen. In fact, are we the only ones thinking that $37,000 is kind of a modest budget for someone whose job description literally includes looking pretty? Plus, we need to keep in mind that this number is, in fact, an estimate. Just because she got one $58 manicure doesn't mean she gets them all the time — she did do her own makeup for what was one of the most-watched weddings in recent memory, so it's not insane to think that she does her own digits while watching Netflix on a Friday nights (okay, we're projecting here). But seriously, where are the Olympic-sized pools of La Mer and Costco-sized vats of La Prairie? At least, that's what we'd expect to have on hand if we became royalty one day. But we guess Catherine's modesty goes right back to that whole down-to-earth thing. Perhaps that's why she's a duchess and we're...doing our nails over Netflix on Friday nights. Sigh. (Yahoo! Shine) 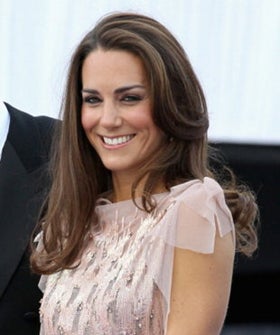 Beauty
Amid The Pandemic, Seeing Myself
For so long, my face was meant for the eyes of the world, as if extending an invitation.
by Jean Chen Ho
Makeup
TikTok’s Clean Look Makeup Trend Channels Main Character En...
Over the years, the beauty world has seen innumerable iterations and phases of “natural” makeup — everything from everyday contouring and str
by Pema Bakshi
Most Wanted
Kosas’ 20% Off Sitewide Sale Is On — Here’s What To A...
Very good sale alert: Clean beauty brand Kosas — of tinted face oil and serum-like mascara fame — is hosting a sitewide sale and everything (!) is 20%
by Karina Hoshikawa
Advertisement
Beauty
Glossier’s First-Ever Eyeshadow Palettes Are Effortless, Elevated...
by Karina Hoshikawa
Makeup
5 Popular ’90s Lipstick Shades We’re Still Obsessed W...
by Jacqueline Kilikita
Most Wanted
15 New & Improved Formulas Giving Blush A Better Beauty Rap
by Karina Hoshikawa
Unbothered
Sephora’s ‘Black Beauty Is Beauty’ Short Film Celebra...
Top beauty retailer Sephora is using their international reach to emphasize how Black beauty and Black trends are the blueprints for the beauty industry. I
by DarkSkyLady
Beauty
22 Makeup Brands That Are Totally Cruelty-Free
by Us
Beauty
Beauty Bay’s Disney Makeup Collection Is What ’90s Dr...
True ’90s kids know that nothing produces that warm and fuzzy, nostalgic feeling like the opening chimes of the Disney theme tune. That unfolding cas
by Esther Newman
Most Wanted
The $8 Amazon Product That Makes My Brows Look Laminated
Although I haven’t always loved my thick and very dark eyebrows, I can now report that they’ve earned the well-deserved spot as one of my favo
by Karina Hoshikawa
Beauty
I Tried $40 Worth Of Drugstore Blush — & Here's My Favorite
by Thatiana Diaz
Affordable Beauty
This $11 Drugstore Foundation Makes My Skin Look Airbrushed
For me, foundations exist on a simple spectrum: They are either meh or life-changing. Many of the former don’t leave a lasting impression (with the e
by Karina Hoshikawa
Advertisement
Advertisement
Discover
R29 Stories & News
Watch
R29 Original Series & Films
Shop
R29's Most Wanted