Skip navigation!
Story from Politics
Rosalia Mera, one of Zara's co-founders, died last night after suffering a stroke while on vacation in Minorca. The 69-year-old force was the richest woman in Spain with a fortune estimated at $6.1 billion. Without ties to royalty or any inherited wealth (she started out as a seamstress in La Coruña), Mera was the wealthiest self-made woman, according to Forbes, and an all-around badass at that; she was a vocal opponent to conservative plans to curtail Spanish abortion laws and supporter of national health care and education programs.
Lest you think that "fast fashion" is a newfangled concept, Mera and her then-husband Amancio Ortega started Zara in 1975 as a store that offered lower priced versions of designer clothing (sound familiar?). The store was originally called "Zorba," but after noticing that there was already a bar a few blocks away from the first store in La Coruña, Spain, they rearranged the letters to spell "Zara." After expanding throughout Spain, then Europe, and then the world, Zara is now the largest clothing retailer in the world, beating out H&M, Forever 21, and Mango. (Yahoo) 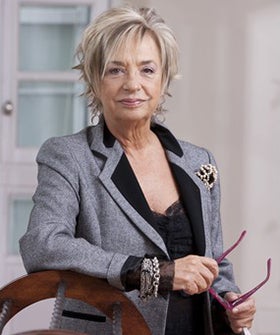 Photo: Via Forbes.
Culture
Loverbar Was A Safe Space For Queer Puerto Ricans; That’s Exactly...
"It would be irresponsible of me to call it a safe space. But I will try my fucking damnest every single day to make it as safe as possible.”
by Mercedes Viera
Culture
The Word “Latinx” IS A Betrayal To Latinidad. That’s Exactly The ...
Latinx is a betrayal. It’s an attack. It’s a butchering of Spanish. And that's why I use it.
by J. A. O.
Work & Money
The Pandemic Exposed The Lie Of Women’s Equality. Where Do ...
As many women face increasing pressures from work and home, activists and experts urge federal action
by Jana Cholakovska
Advertisement
Coronavirus
The FDA Has Officially Approved Pfizer’s COVID Vaccine. Wil...
Update: On Monday, August 23, the FDA approved the Pfizer/BioNTech COVID-19 vaccine, making it the first officially licensed vaccine against the coronaviru
by Danielle Campoamor
Unbothered
Civil Rights Legend Lucille Times Dies At 100, Leaving A Lasting ...
Lucille Times, a  Montgomery civil rights activist who got into a fist fight with the same bus driver Rosa Parks stood up to, passed away late Monday even
by Tayo Bero
News
Apparently, Giving Money To People Reduces Poverty & Hunger. Who ...
As it turns out, there’s an easy, straightforward way to reduce the endemic poverty and hunger in America: money. According to new data from the U.S.
by Lydia Wang
News
A Lot Of People Bought Cuomosexual Merch In 2020. What Happens To...
On Tuesday, New York Governor Andrew Cuomo announced his resignation amid a slew of allegations and scandals. Along with ongoing investigations into whethe
by Lydia Wang
Climate
New Climate Change Report Confirms: Everything’s Terrible, ...
A major United Nations (UN) scientific report has concluded what any sentient being has long known to be true: Global warming is not only real, it is getti
by Danielle Campoamor
News
Should Wealthy Countries Give COVID Booster Shots When Other Coun...
On Wednesday, the World Health Organization called for a moratorium on wealthy nations distributing COVID-19 booster shots to already vaccinated people, du
by Erin Corbett
Olympics
What Makes Someone Puerto Rican Enough? How About Winning Gold?
A Black South Carolina-born Puerto Rican won the island’s second gold medal ever in the 2020 Olympic women’s 100m hurdles, a moment of pride for many b
by Adriana Rozas Rivera
Unbothered
Protest Is Front & Center At The Tokyo Olympics — But For Black A...
The image of hammer thrower Gwen Berry standing on a podium with her hip cocked to the side, her body turned away from her competitors and the anthem they
by Kathleen Newman-B...
Somos Latinx
It’s About Time We Talk About Rosalía & Latinidad
Catalonian songstress Rosalía Vila Tobello, who has graced the covers of Elle, W, and Vogue Mexico, grew up in the landlocked Spanish town of Sant Esteve
by Michelle Santiago...
Advertisement
Advertisement
Discover
R29 Stories & News
Watch
R29 Original Series & Films
Shop
R29's Most Wanted