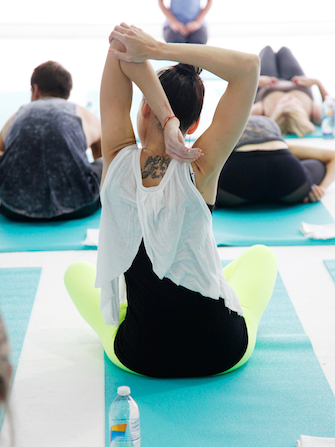 Photographed by Erin Yamagata.
If you've been called a hot-head one time too many, or just generally struggle to keep your cool in stressful situations, this one's for you. According to a recent study in the Journal of Holistic Nursing, yoga has the power to make you nicer — whether you're at work or with friends or family.
[RELATED LINK] Can Meditation Make You More Considerate?
Women's Health reports that in the survey of over 1,000 yogis from around the U.S., 87% reported that yoga makes them happier, while 67% reported that it improves their relationships. The yoga fans stated that their sessions strengthened their positive qualities and squashed their irritability and intolerance, making it easier for them to deal with just about anyone.
Advertisement
[RELATED LINK] How Yoga Can Help Beat An Embarrassing Health Issue
They have also seen personal growth, a deepened sense of community, and greater adaptability from their practice. Click through for the full scoop on how yoga can make you kinder — your coworkers, loved ones, and maybe that barista from this morning will thank you. (Women's Health)
[RELATED LINK] 4 Yoga Poses to Make You Feel Sexier
Fitness
Everything You Need For A Home Gym, According To Fitness Instructors
by Karina Hoshikawa
Fitness
13 Workout Dresses Making A Case For Active (& Inactive) Wear
by Karina Hoshikawa
Fitness
What Are The Best Gym Bags For People On The Go?
by Emily Ruane
Advertisement
Father's Day
17 Lululemon Father’s Day Gifts For Dads Who Own One Pair O...
by Karina Hoshikawa
Dedicated Feature
These Young Athletes Are Changing the World of Skateboarding
Skateboarding has come a long way in recent years. We see it in the way the sport has moved from counterculture to mainstream, highlighted by its inclusion
by Nikki Natividad
Workout Clothes
The Best Underwear You Need For Your Sweatiest Workouts
by Cory Stieg
Fitness
8 Sustainable Running Shoes For Some Eco-Friendly Exercise
by Karina Hoshikawa
Fitness
Is The Mirror Still Worth The Hype? An Investigation
The year was 2018: clips from Beyoncé’s historic #Beychella set were making the rounds on YouTube, millions tuned into Meghan Markle and Prince Harr
by Karina Hoshikawa
Workout Clothes
11 Sun-Protective Workout Clothes That Don’t Look Dorky
by Cory Stieg
Fitness
The Best Workout Bikes To Invest In For Next-Level Home Workouts
by Karina Hoshikawa
Yoga
The Top Yogi-Approved Mats For Getting Your Flow On
by Karina Hoshikawa
At Home Wellness
Don’t Miss Out On Mirror’s Epic Black Friday Deal
Mirror, mirror on the wall, what’s the fairest deal of all? (Hint: It’s this one.) High-tech home fitness brand Mirror started the Black Friday
by Karina Hoshikawa
Advertisement
Advertisement
Discover
R29 Stories & News
Watch
R29 Original Series & Films
Shop
R29's Most Wanted