Skip navigation!
It was about a week ago when I first started to notice a familiar-looking furniture piece frequenting my Instagram; it appeared on my feed, my discover page, and in several stories of people that I follow. It was a simple yet undeniably chic wooden chair, distinguished by its woven-wicker back and warm honey hues. It was not a seat made to curl up and read a book in, but rather a seat to intentionally display as it unassumingly occupies space next to a napping cat on a colorful geometric rug. At first, I chalked it up to a targeted advertisement — I had been looking for a new desk chair and spent most of the previous week browsing second-hand sites with similar styles. But then I began to see the chair several times a day for over a week and could no longer shake the growing feeling that what I would soon learn to be called "the caning chair" was everywhere. While caning chairs are nothing new to those with an affinity for interior design, their recent social-media takeover has been a real shock to the system for those of us less familiar with the origins of the popular mid-century-inspired seating. So, I decided to ask around in order to get a clearer picture of the chair’s origins — below I cover the who, what, when, where, and why of this sudden-trend surge.
Advertisement

While there have been many variations of the caning chair as it's become increasingly popular in recent years, it can most clearly be defined by its woven-wicker backing. Having been discovered as far back as 1300 B.C. in Egyptian tombs, the history-rich chair has materialized in 2020 without much acknowledgment of the story behind the labor-intensive caning process that accounts for its iconic woven detailing. One woman who has a first-hand perspective on the caning chair is interior designer Leanne Ford. Giving a wink and a nod to its lustrous past, Ford explained that because the caning process was incredibly time-consuming before the advent of weaving machines the chair was once only used by kings and queens of Europe. Just this past February, Ford released a furniture collection with Crate & Barrel featuring natural wood and cane pieces that she describes as "a modern take on classic materials." "I tend to design with one foot in the past and with one eye on the future," she shared. "By keeping the color story consistent and neutral we were able to create a line that I believe will stand the test of time. Caning encompasses everything I was aiming to do with the line."
“

I had a vision of making caning more modern and masculine by creating a black version. What I didn't realize is there was a reason it hadn't been done much yet.

LEanne ford
”
That's not to say that Ford didn't face her share of challenges in trying her hand at the caning craze: "What I was surprised by was how difficult it was to create a quality black caning," she noted, "I had a vision of making caning more modern and masculine by creating a black version. What I didn't realize is there was a reason it hadn't been done much yet." Attempting a contemporary variation of a classic style seems to be a common thread among today's caning chair designers. While it was considered ordinary when first gaining traction, now that same wicker seat is being reinterpreted with velvet or linen cushions and wood or leather bases — with only a threaded back remaining as its defining feature.
Advertisement 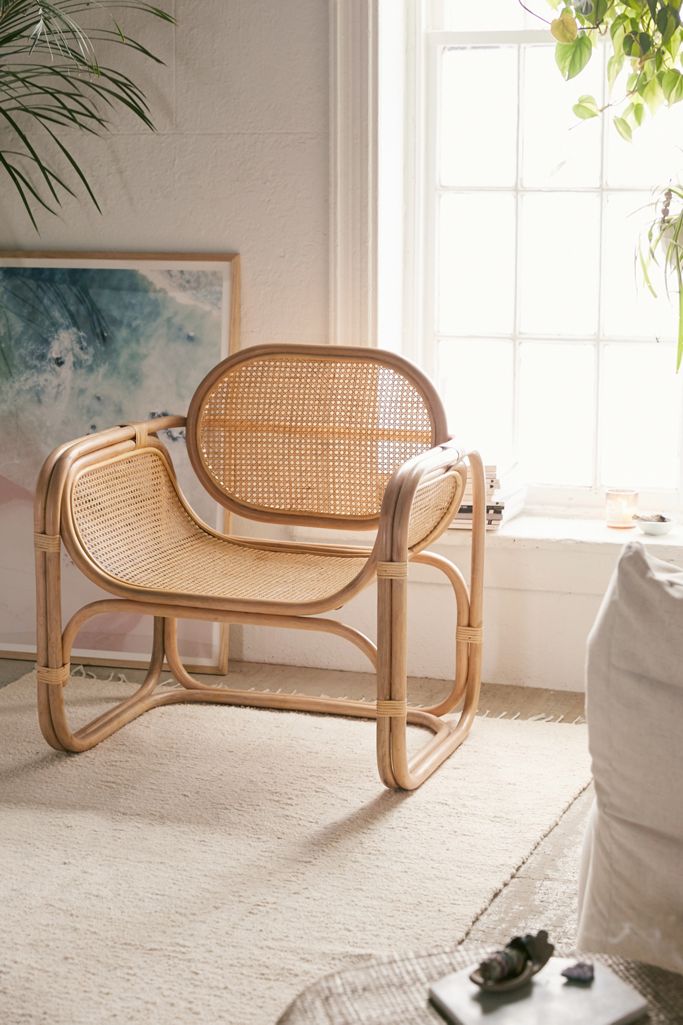 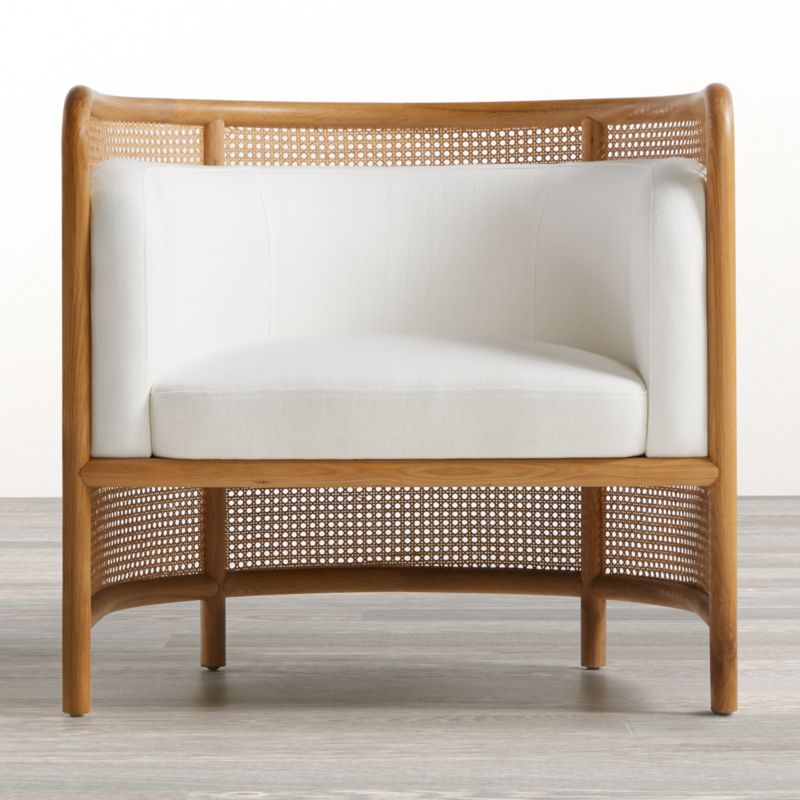 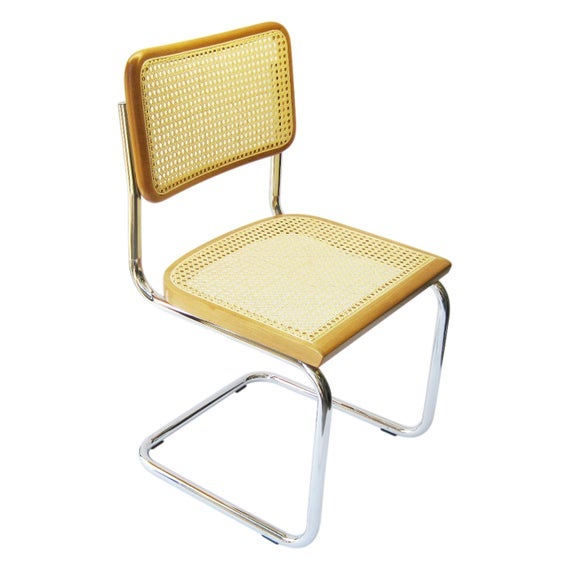 This modern caning-inspired design, known as the "Cesca chair" has been a frequent request from second-hand furniture shoppers as of late, according to Greenpoint-based furniture shop Dobbin St. Vintage Co-op. Known among hip New Yorkers for their art deco and mid-century modern pieces, the people behind the funky antique store weighed in on the mentality behind the sudden trend, stating "A friend mentioned to me that the chair reminded her of her childhood and her mother's kitchen."
“

The world is such a crazy place right now, I think the use of cane is a means to reconnect with tradition. From the handwoven feel to the earthy texture, it provides serenity and familiarity in a time when we all need a zen space.

Dobbin St. Vintage Co-op
”
Indeed, it likely was, as the "Cesca chair" was originally designed by Marcel Breuer in 1928 and gained popularity throughout the 1960s. "The world is such a crazy place right now, I think the use of cane is a means to reconnect with tradition." Both home decor and furniture saw an uptick in sales during the early aughts of the pandemic, as many people invested in sprucing up their living and working environments — a shopping trend that's as true in the fashion world as it is in interior design. Just as retailers saw a return to basics with an increased appetite for loungewear, consumers are similarly shifting their spending to pieces that bring them comfort inside their spaces. "From the handwoven feel to the earthy texture, it provides serenity and familiarity in a time when we all need a zen space," the team behind Dobbin St. concludes. Even if that zen space is used as a means of combating the feeling that WFH is just schlepping to your desk every morning by personalizing your working environment.
Advertisement 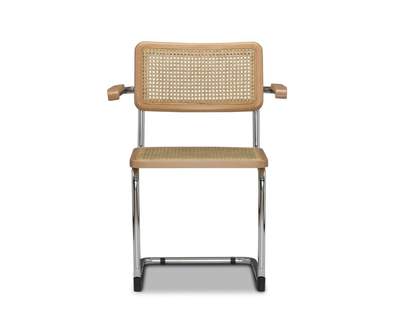 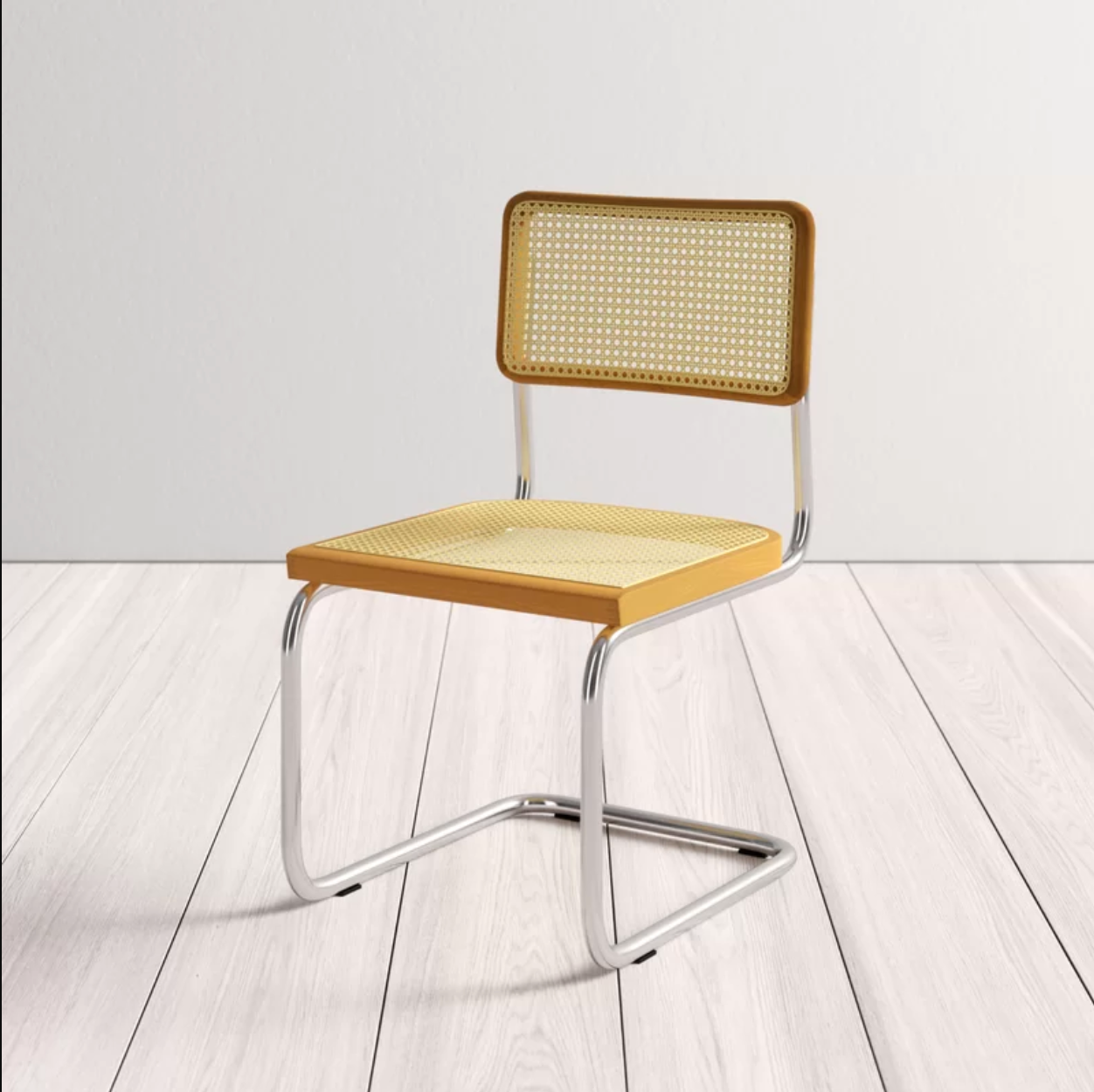 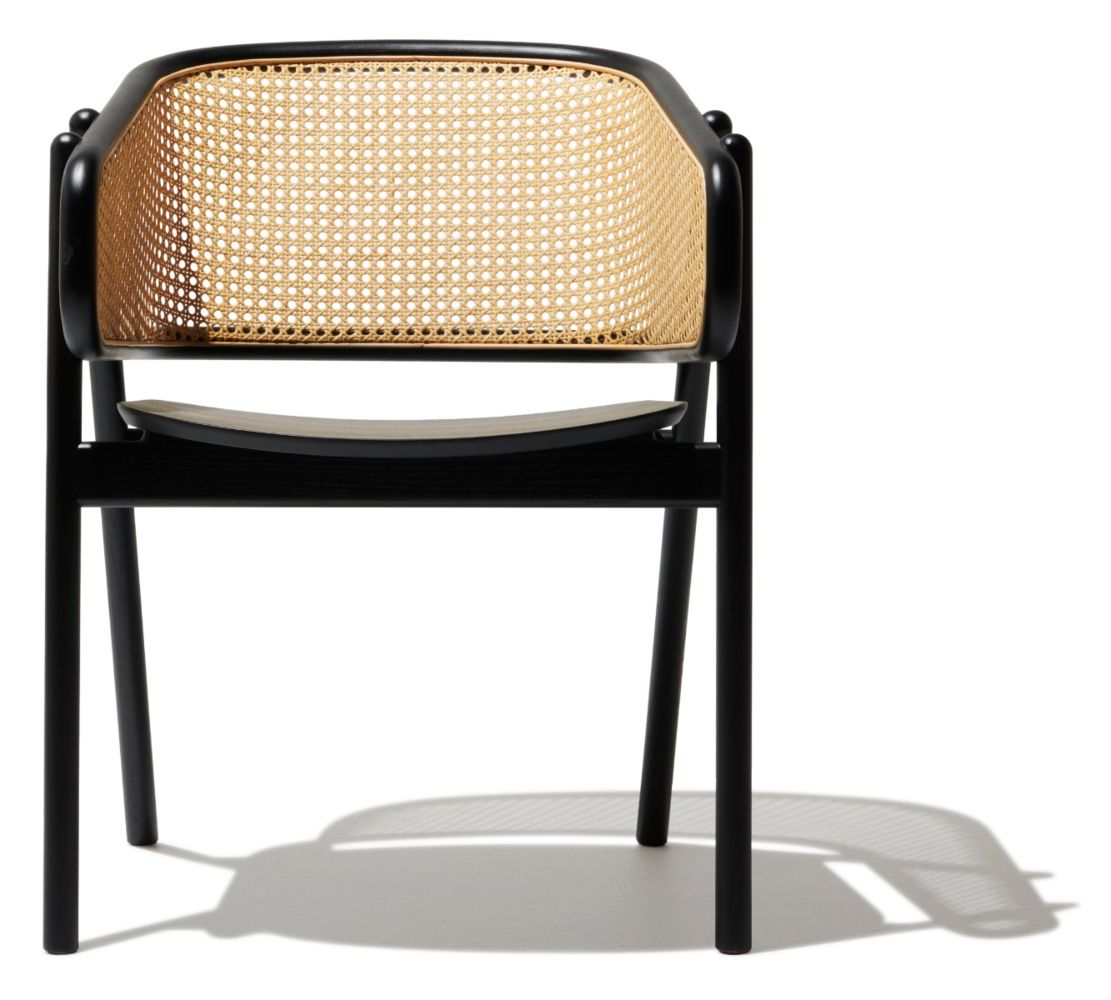 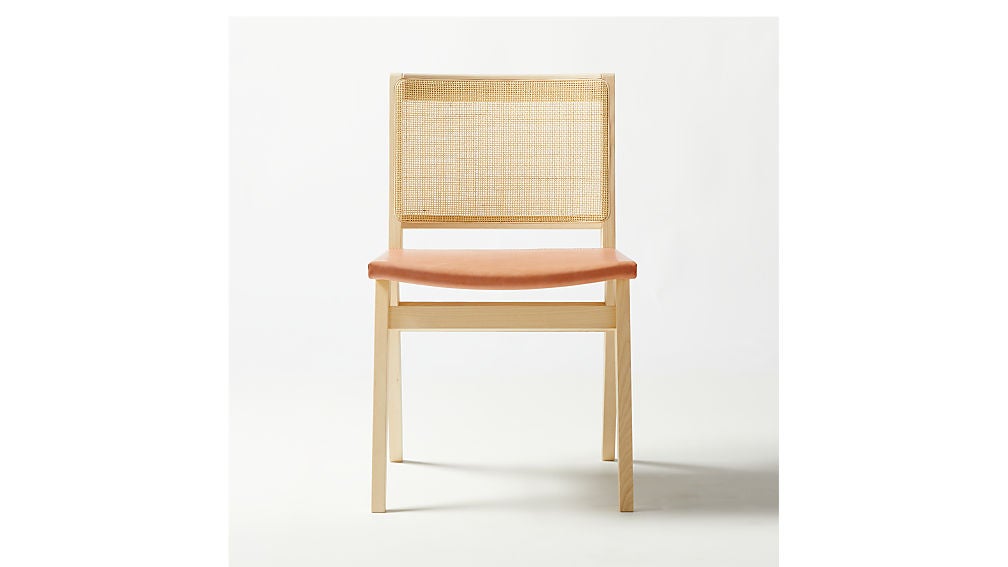 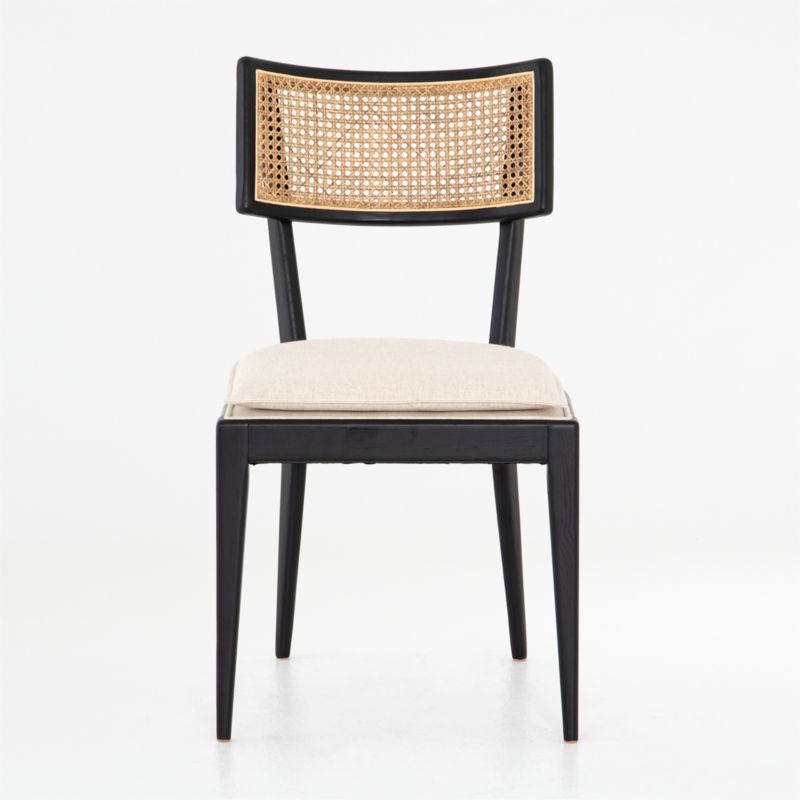 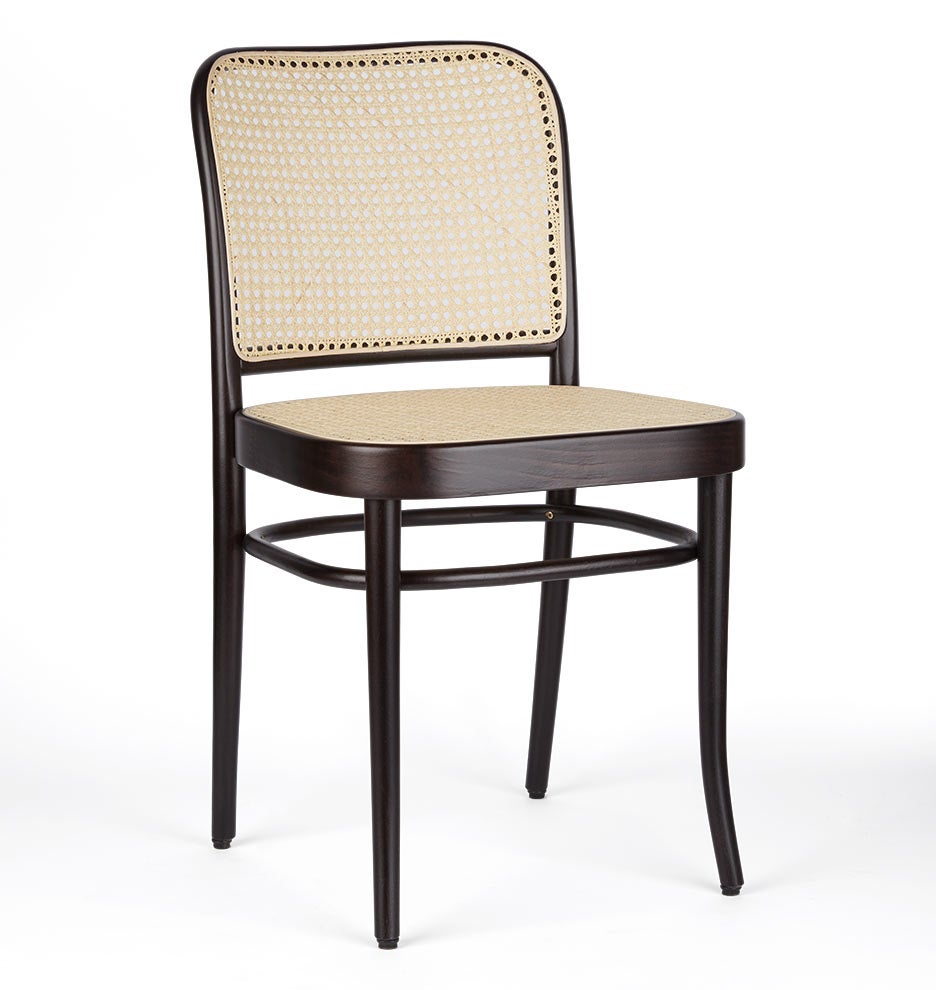 Rejuvenation
Ton 811 Caned Side Chair
$429.00
Rejuvenation
Photographer, model, and vlogger Ella Snyder chimed in giving us her hot-take on the chair: "I don't have one, but I wish I did! They're so cute!" The cane woven chair is having such a moment that there's a good chance you'll even encounter one outside of the home, as exemplified in Synder's near-stooping experience: "I saw some broken ones up for grabs outside of The Real Real store yesterday and even though the seat of each one had a hole in it, I was still pretty tempted to bring them home."
“

With everyone staying indoors, a great lounge chair is a great accent piece for every living room or office.

Olivia Perez
”
Podcast host and author Olivia Lopez is also a fan of the mid-century-driven craze, attributing the chair's newfound stardom to the comeback of The Pierre Jeanneret chair — stating, in her opinion, that it, "relaunched the cane chair trend." It would be difficult to see the Jeanneret chair and not compare its structure to the caning chairs of the moment, which are oftentimes near replicas. "It shows how timeless natural materials and modernist design is," she goes on to say. "With everyone staying indoors, a great lounge chair is a great accent piece for every living room or office." Another endorsement comes from Holistic Nutritionist and all-around cool person, Bianca Valle, who deemed the chair a "nice design piece that opens the space." When asked about where she purchased her own cane chair, she says it was a gift.
Advertisement

This whole thing took a lot of effort #tbh ❤️ 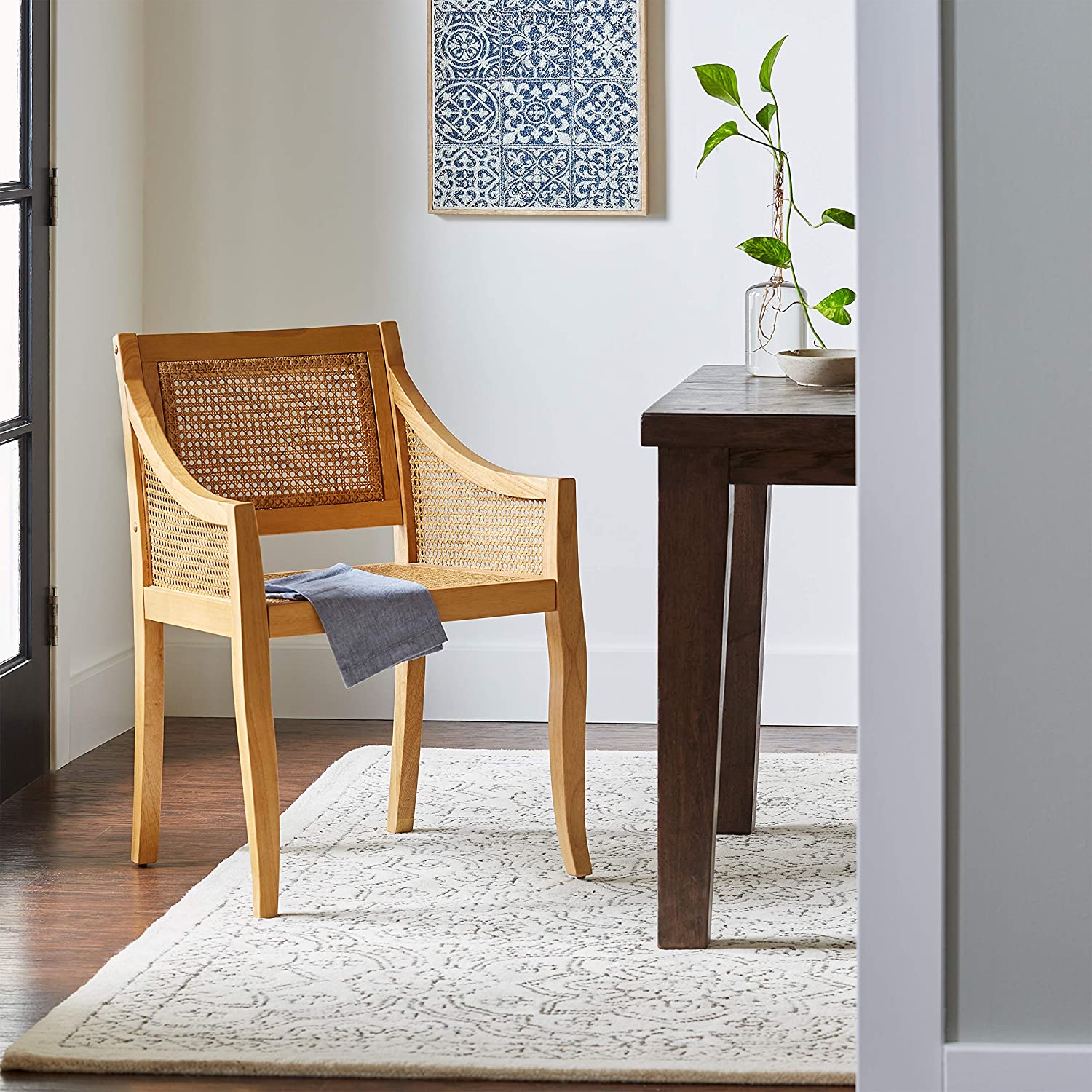 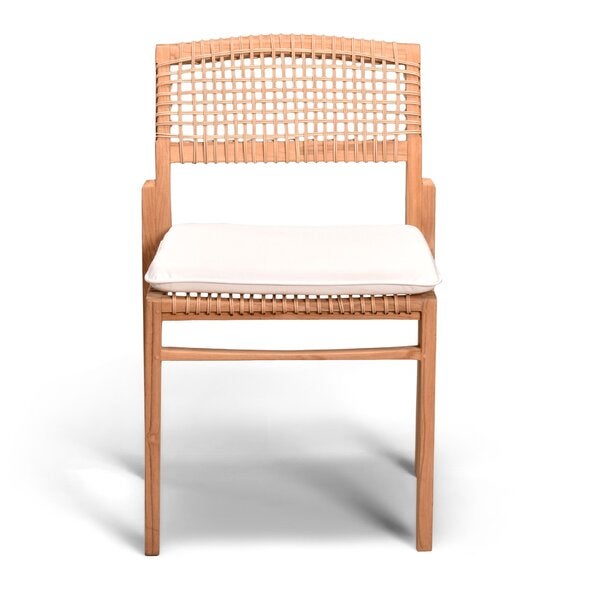 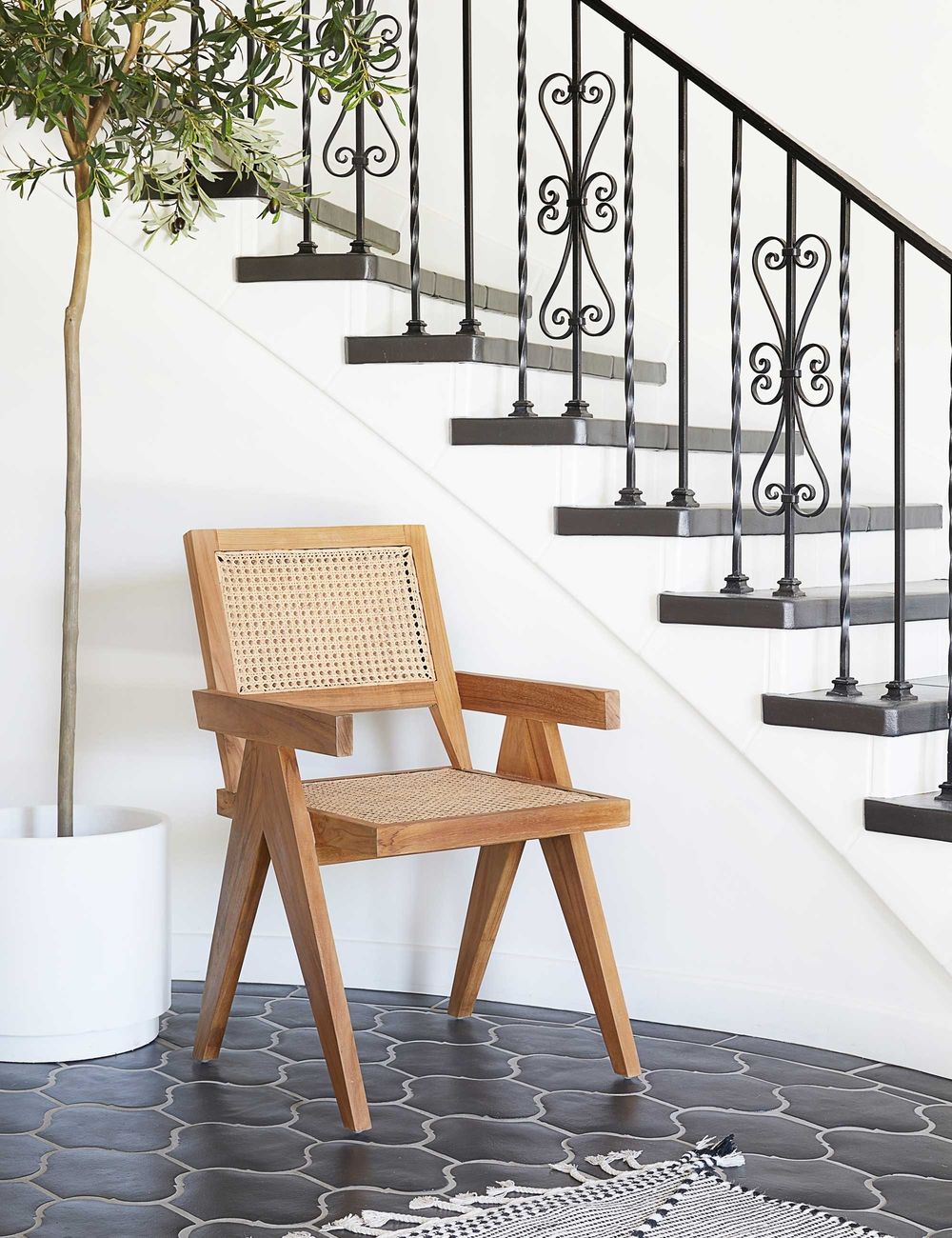 Lulu and Georgia
Alvi Dining Chair, Natural
$676.00
Lulu and Georgia
Although it's made a name for itself as "the chair that's all over Instagram," the canning's roots carry much more weight dating back to the significant beginnings of industrial design. Now, after gaining a well-rounded understanding of its multifaceted past, more than a few proposed reasons for its recent fandom, and daily unparalleled marketing at an intersection of peak interior-design curiosity, I can't say I don't feel completely compelled to go online and buy one for myself.
At Refinery29, we’re here to help you navigate this overwhelming world of stuff. All of our market picks are independently selected and curated by the editorial team. If you buy something we link to on our site, Refinery29 may earn commission.
Home
These 28 Tiny Desks Are WFH Space Saviors
by Amanda Randone
College
9 Best Laundry Bags For Dorm Dwellers & Apartment Renters
by Olivia Harrison
Furniture Guide
The Best Ready-To-Ship Furniture For Impatient Peeps
In the world of interior design, patience impatience is a virtue. Who can wait two months for their dream couch? Or three for a coffee table? It’s ou
by Alexandra Polk
Advertisement
Sustainability
29 Sustainable Bedding Brands (& Deals You Can Score On Them)
by Elizabeth Buxton
Home
Honey, Our Place Shrunk The Always Pan
Since debuting in 2019, the sustainable cookware hub Our Place churned out a social media-famous eight-in-one pan, a beloved eight-in-one pot-like successo
by Alexandra Polk
Tried & True
This Bamboo Toilet Paper Brand Is Saving Trees (& Your Butt)
Deal alert: Get 25% off one-time purchases and first orders of subscriptions with the code REFINERY25. There’s no expiration on this deal. It’s
by Jinnie Lee
Furniture Guide
According To The Internet, These Couches Feel As Good As They Look
by Alexandra Polk
Target
Just Like So, Like That — Tabitha Brown’s Home Decor Target...
by Alexandra Polk
Deals
Save Even More On High-End Generics From Brandless During The Mon...
by Alexandra Polk
Deals
The 33 Best Nordstrom Anniversary Sale Home Deals Happening Now
by Alexandra Polk
Home
The Best Affordable Loveseats — According To Small-Space Dwellers
by Elizabeth Buxton
Hype Machine
The 12 Best Dining Chairs Reviewers Call Comfy & Cool
by Alexandra Polk
Advertisement
Advertisement
Discover
R29 Stories & News
Watch
R29 Original Series & Films
Shop
R29's Most Wanted