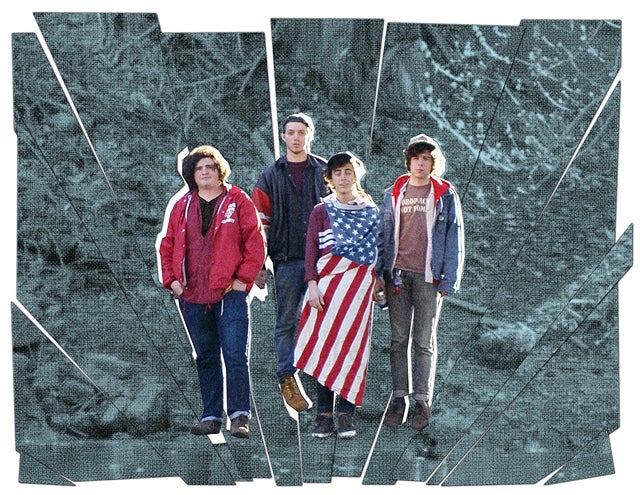 Sure, we could try to describe Twin Peaks' sound with a jumble of adverbs and adjectives, but it's probably best to let the band's one-sentence Facebook description do the talking: "Five doods, gnarly 'tudes, total hunks, play to drunks." (The fact that there are only four members doesn't change the sentiment one bit.) Formed in Chicago, the band is comprised of longtime friends — Cadien Lake James, Clay Frankel, Connor Brodner, and Jack Dolan — who dropped out of college to pursue their collective rock 'n roll dreams. While it's not a career path most guidance counselors would approve, so far, it seems to be working out. The band dropped its debut album, Sunken, earlier this year to critical acclaim and is already itching to release more music. We chatted with Twin Peaks' Jack Dolan about growing up, dropping out, and partying hard.
Advertisement

Getting Schooled
"I'm the one in the band that has known everyone the longest. I grew up across the street from our drummer, Connor, and I went grade school with the lead-singer/guitarist, Cadien, since kindergarten, through high school, and into a semester of college. We all started hanging out in high school a lot. Clay didn't join 'til later on, but I've known him for five or six years. We kept playing and playing and finally became Twin Peaks."

The College Dropouts
"Honestly, it was a little stressful. We had times when we were touring before college where we were thinking about why we were making the decision to all go to school. When we had the conversation with Autumn Tone about doing a record and going to South by Southwest, it hit us. While we were having an amazing time at school, this opportunity was coming up. It was kind of sad, but we definitely made the right decision. We just had to get serious with ourselves and take advantage of what we were given in that moment."

A Little Help From Friends
"One of the biggest inspirations to us was White Mystery. Alex and Francis White — Alex has been playing at The Empty Bottle since she was 14 years old. They've done everything themselves: merch, booking, everything. They were really supportive of us when we were starting out. They helped us get our first DIY shows, because a lot of people didn't want young bands coming to those shows. They really believed in us, and they make really awesome music."

Upping Their Game
"Sunken is really a collection of songs we'd been playing throughout high school put into a short-and-sweet album. It's all about growing up and the highs and lows of that. For the next one, we're not taking it in any direction per se; we're just trying to trying to step it up to the next level. We recorded those songs a year before it came out, pretty much, so we've been ready to take our newer songs to the next level. Cadien is really grasping to produce. It's going to be good. It's going to be way better. We're stoked."

Party Time
"I could go on for hours telling you stories about touring. Our favorite show was probably L.A. The show was sold out. We had a blast, man. The weed is cheaper on the West Coast, so that is cool, too [laughs]. We have a lot fun when we get to bring our friends to places. They come on tour with us sometimes and get to experience all the cool stuff that we do — we took a bunch of friends to South by Southwest with us. If we're getting interviewed or taken out to dinner, they get to come along, too, and get free food. Generally, we just have an awesome time. We party a lot. Tour is just one big party."