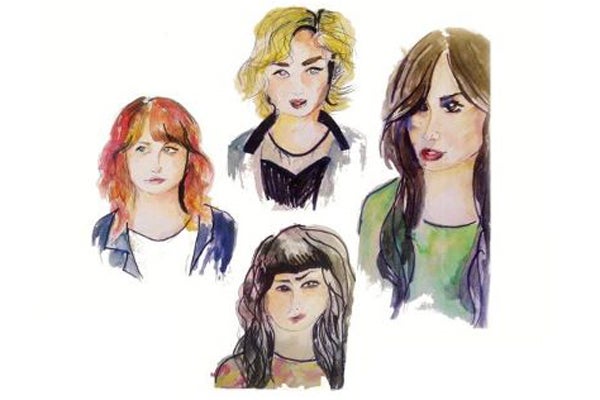 During SXSW next week, nearly 2,000 bands will descend upon Austin to play showcase after showcase to crowds that are hungry for tacos and the next buzz-band sensations. While this accelerated hype machine may be a crapshoot for many deserving bands, Habibi, a Brooklyn-by-way-of-Detroit act featuring four young women, might just be one of the few to rise to the top.
Their new single “Tomboy” (actually a demo to be released on an upcoming cassette), features buoyant vocals, a bumblegum stomp, and tongue-in-cheek lyrics. While past all-girl garage bands have made waves (Vivian Girls, Dum Dum Girls, etc), Habibi is singular in their lack of self-seriousness. “Tomboy” sounds as much like a Saturday morning cartoon theme song as it does riot grrrl anthem, and if Habibi get the attention they deserve, it’ll be because they sound like they’re having a blast. And who doesn't want that, right?
Advertisement

Advertisement
Entertainment
The Mystery Around Carole Baskin’s Husband Is Getting Its Own Show
Netflix’s documentary series Tiger King: Murder, Mayhem, and Madness tells the wild story of private zookeeper Joe Exotic and his longtime rival, animal
by Kaitlin Reilly
Pop Culture
Kristin Cavallari & Her Kids Are Back In U.S. After Allegedly Bei...
After spending weeks in the Bahamas, Kristin Cavallari is home in the United States, according to a new post on her Instagram Story.  On Tuesday, Cava
by Kaitlin Reilly
Pop Culture
This Is How You Ex: Demi Moore & Bruce Willis Are Having An Uncon...
For pretty much everyone, no quarantine is ideal, but exes Bruce Willis and Demi Moore have made the best of what, for the rest of us, would be a bad situa
by Kathryn Lindsay
Movies
Why Heath Ledger Refused To Present With Jake Gyllenhaal At The O...
Ang Lee’s Brokeback Mountain was one of Hollywood’s first mainstream films about a same sex relationship, and even took home three Academy Awards in 20
by Kaitlin Reilly
Entertainment
Where To Stream Modern Family From The Beginning, In Case ...
What will life be like without the Pritchett, Dunphy, and Tucker families? That’s a question many fans will soon face now that Modern Family is coming to
by Kelly Schremph
TV Shows
Here’s Who Is (Probably) Appearing In The New Tiger King Re...
While Netflix still hasn’t confirmed the rumors that the Tiger King documentary series is coming back for one more episode, the cast of the pop cultu
by Kathryn Lindsay
TV Shows
Modern Family Is Really Over & Now, The Cast Is Moving On
by Lia Beck
Entertainment
Chris Hemsworth Is A Very Manly Man In Man Movie
Chris Hemsworth’s biceps alone are a walking reminder that he could probably destroy anything in his path if he wanted to, but his new movie Extracti
by Kathryn Lindsay
Best of Netflix
Everyone Is At Home Watching These 10 Shows & Movies On Netflix R...
by Ineye Komonibo
Celebrity Couples
Peter Weber Finally Answered Those Burning Questions About Him & ...
Until The Bachelorette can finally start filming, it appears Peter Weber’s season of The Bachelor is technically still going. The pilot went from Mad
by Kathryn Lindsay
Pop Culture
An Exhaustive Guide to Every Celebrity You’re Going To See ...
by Gina Vaynshteyn
TV Shows
Why Everyone Is (Thirst) Tweeting About Danny Phantom
Now that much of the world is social distancing due to the spread of the coronavirus, there’s time to reflect on our past passions. For many people on Tw
by Kaitlin Reilly
Discover
R29 Stories & News
Watch
R29 Original Series & Films
Shop
R29's Most Wanted