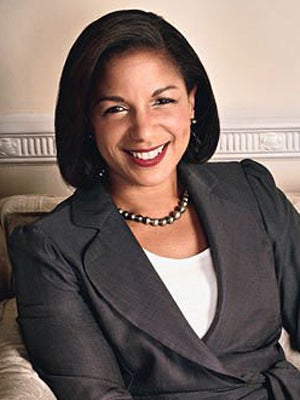 UPDATE: U.S. ambassador to the United Nations Susan Rice has withdrawn from the Secretary of State race,
The New York Times
reports. After months of criticism and push-back from congressional Republicans, Rice addressed a letter to the president, writing "the confirmation process would be lengthy, disruptive and costly — to you and to our most pressing national and international priorities. The tradeoff is simply not worth it to our country.” (The New York Times)

This January, on Capitol Hill, it's out with the old and in with the new...(okay, as much "new" as a government full of career politicians and 1,000-term incumbents can be). In addition to a fresh crop of U.S. senators, representatives, and maybe even a few Supreme Court justices, in the upcoming months, we'll see a changing of the guard in a few cabinet positions, as well — including one held by our girl/dream BFF/role model extraordinaire, Secretary of State Hillary Clinton.
Advertisement
We're sad to see her go and are crossing our fingers for 2016, but before her departure, we need to educate ourselves on her potential successor: the highly controversial, Obama-favorite, U.S. Ambassador to the United Nations, Susan Rice. Given the September 11 terrorist attack on the U.S. post in Benghazi, Libya, and the controversy that followed, you've probably at least heard her name at this point. But, if you're unsure about what the facts are around the incident and Rice's reporting of it, as well as her qualifications for replacing HRC, we've got you. Ahead, everything you need to know about our next possible super-senior liaison to the international community.
Who is she? Born and raised in the District, Rice graduated from Stanford University before being awarded an esteemed Rhodes Scholarship and getting her master's and doctoral degrees at New College, University of Oxford. Since then, she has served on the National Security Council staff, as assistant secretary of state for African affairs during Bill Clinton's presidency, and as senior foreign policy adviser during Obama's '08 campaign. In '09, she became the first black woman to become a U.N. ambassador — a pretty impressive resume, no doubt.
Why is she a controversial choice? On September 11, 2012, the U.S. consulate in Benghazi, Libya, was attacked, leaving four Americans dead, including U.S. Ambassador J. Christopher Stevens. A few days later, Rice made the talk-show rounds, providing faulty information from the intelligence community. Critics say Rice's initial account of the events was part of a political ploy to downplay the attack and, therefore, help President Obama during the election. Rice's first explanation purported that a group of protesters were rallying against a U.S.-produced anti-Muslim video, which then escalated into the attack against the diplomatic post. However, a timeline of the Department of Defense's actions (a document given to reporters last week by an unnamed senior defense official) suggested that the U.S. government at least suspected the attack was an act of terrorism and not a protest gone wrong, as Rice had said. The U.N. ambassador, however, says she was given incorrect information by the intelligence community and that she by no means attempted to mislead the public.
Advertisement
What does this mean? One thing we know for sure: Rice has Obama's full seal of approval. "Susan Rice is extraordinary," the president said last week during a cabinet meeting. However, congressional Republicans have promised to block Rice's confirmation, if she's nominated, making Senator John Kerry the next most likely candidate. Some say that Rice has been over-villified and is being used as a scapegoat — particularly since then-CIA head, David Petraeus, and the intelligence community that vetted Rice's talking points were left unscathed. Although to be fair, at the time, we (as a nation, embarrassingly enough) may have been too consumed by the soap opera that was slowly unfolding between General Petraeus and a mistress, twin sisters, a mentee, and a shirtless FBI agent, to focus clearly.
What does this REALLY mean? The secretary of state must be confirmed by the U.S. Senate, and with major criticisms from the right regarding Ms. Rice, it will be an uphill battle. Republicans, like John McCain, fear that Rice may not be able to hold her own and may play puppet to Obama's masterful strings. The Democrats, in return, argue that Rice's record speaks for itself. Those are the basic facts, but how this will play out still remains to be seen.

Photo: Courtesy of U.S. Mission to the United Nations