Skip navigation!
Story from Celebrity Beauty
We just did a double take upon seeing these brand-spankin’-new images of one of our style faves, Rooney Mara. We barely identified the The Girl With The Dragon Tattoo actress in light brown locks. With no bangs. It's crazy how far a little hairstyle switcharoo can go, no?
Looks like she ditched her edgy ‘do (which has become a distinguishing aspect of with her ravishing red-carpet look) for some beachy, ombré tresses. The doe-eyed stunner was snapped on set, filming The Bitter Pill. So, obviously it’s for a role, but we’re wondering if Rooney will go back to black, post-film? It’s kind of become her thing, no? As much as we love the bold bangs that Rooney was rocking, it’s pretty cool to see her switch things up a bit. But what style are you feeling — dark and daring, or the lighter side? (Celebuzz) 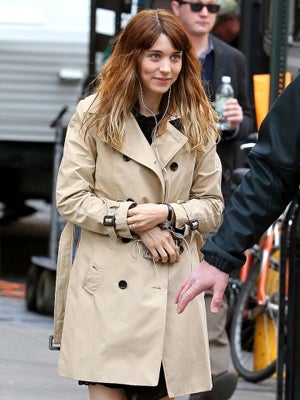 Beauty
Why Do Beauty & Fashion Influencers Look The Same On My Feed?
Over the past year, many of us began to think of our hobbies outside of work. For me, it wasn’t so easy. See, I get paid to write about Victoria Beck
by Megan Decker
Beauty
Victoria Beckham’s New Blush Is (Almost) As Fun As Roller S...
Victoria Beckham keeps her ringtone on loud when she’s traveling for work. I know because, yesterday, we were sitting the same room — well, the sam
by Megan Decker
Beauty
Khloé Kardashian Opens Up About Her Post-COVID Hair Loss
Khloé Kardashian’s experience with COVID-19 feels like a lifetime ago. Her diagnosis was very early on in the pandemic —March of 2020 — a scary
by Megan Decker
Advertisement
Beauty
Sydney Sweeney Raves About The Eyelash Serum She Found On TikTok
At this point, anyone with an HBO subscription (their own or borrowed) knows Sydney Sweeney. The 24-year-old actress stars in Euphoria alongside Zendaya an
by Megan Decker
Celebrity Beauty
Ladies & Gentlemen… Kylie Jenner’s Baby-Care Line Is ...
Today, September 28th, marks the launch of Kylie Jenner’s newest business venture, Kylie Baby. The kid-friendly brand comes complete with bath-time e
by Megan Decker
Celebrity Beauty
Linda Evangelista Says CoolSculpting Left Her “Permanently ...
In an emotional post shared to Instagram late Wednesday night, legendary ’90s supermodel Linda Evangelista revealed that she filed a lawsuit against
by Rachel Krause
Beauty
Hailey Bieber Debuts A Summer Makeup Trend That’s About To ...
Summer “trends” have to be practical. It’s hot and you’re sweating, so you lean into it: throw your hair in a slicked-back low bun,
by Megan Decker
Celebrity Beauty
How MJ Rodriguez Solidified Her Beauty Icon Status At Last Night&...
by Megan Decker
Celebrity Beauty
Quannah Chasinghorse Is The Breakout Star Of Last Night’s M...
The theme of last night’s Met Gala was “In America“, and the celebrities who attended the illustrious event interpreted the prompt in eve
by Megan Decker
Beauty
The 2021 Met Gala Beauty Looks That Stole The Damn Show
by Pema Bakshi
Skin Care
Naomi Osaka’s New Skin-Care Line Was Inspired By A Sunburn
The unappealing white cast left behind after the application of a high-SPF mineral sunscreen is understandably enough to deter many people with melanated s
by Megan Decker
Beauty
Lana Condor’s “Candy Village” Manicure Took Exa...
Like many 24-year-olds, Lana Condor is into nail art. The pandemic inspired the actress to quit her former nail-biting habit cold turkey (“do you kno
by Megan Decker
Advertisement
Advertisement
Discover
R29 Stories & News
Watch
R29 Original Series & Films
Shop
R29's Most Wanted