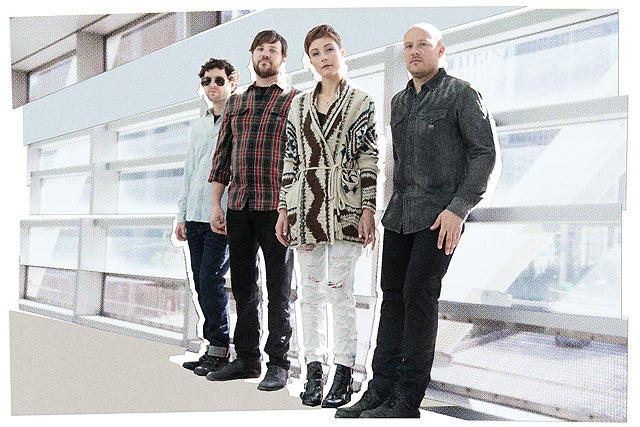 Photographed by Sunny Shokrae. Illustrated by Ammiel Mendoza.
When we catch up with Poliça, the band just opened for The xx at Radio City and has another gig coming up in the same location. The concerts are two of the biggest shows the band's ever played, and its new album, Shulamith, hasn't even been released yet. And, while its live show is a four-piece, Poliça has as shadowy fifth member in the form of Ryan Olson, who produces the band and cowrites songs with singer Channy Leaneagh. It may be an unorthodox setup for an indie group, but it works for Poliça, who give Olson's atmospheric synth-pop life, both in the studio and on the road. Poliça stopped by Refinery29's office before its second outing with The xx ("One of our favorite bands," says drummer Drew Christopherson) to talk its gorgeous new record, Olson's role in the group, and the never-ending quest for the world's best cocktail bar.
Advertisement
Tropical Vibes
Channy Leaneagh: "Ryan was writing in Brazil for almost three quarters of the record. Sometimes I think it has more of a tropical, sunny feel than if he were writing from Minneapolis. I think about that, sometimes. It's warmer — a little happier-sounding."
Drew Christopherson: "Song by song, we might want to encapsulate a certain vibe, but not necessarily with the whole record. I do think that there are some songs on the new record where we intentionally tried to achieve a different dynamic than we did on the first. Or, it just so happened that this collection of songs was picked with a bigger palette of color."
Leaneagh: "I'm more into just writing something that feels good to me. I don't go into a record thinking 'I want to write a sad record, or a happy record, or a record about New York, or about my favorite book.' It's whatever feels right."
Radio City
Leaneagh: "We were playing Radio City last night as an opening band, playing all new songs. I have no idea how people should react — I'm not expecting anything out of them. The new songs went well, but in general, because this band writes with the live show in mind, it usually goes pretty much how much we imagined it would. I wasn't expecting the crowd to go, 'Woo! Oh, my god, I'm losing my mind!' More than anything, we just want to play new songs — we're very excited to be playing new material."
Advertisement
Chris Bierden: "We had developed our show quite a bit over the past year-and-a-half, so we wanted to bring that tightness together — that live feel from our shows. We were hoping that would translate for this album, and certainly it did for some songs." 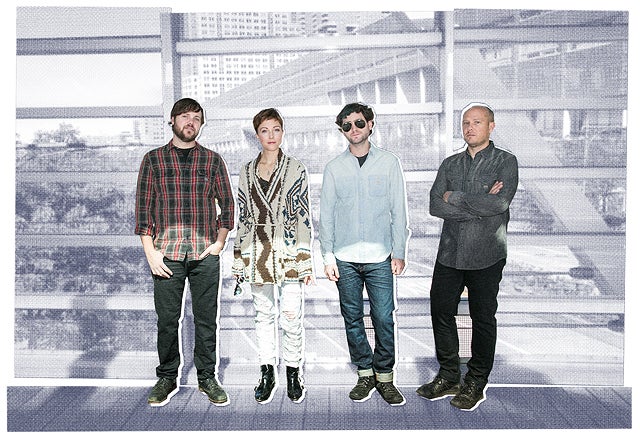 Photographed by Sunny Shokrae. Illustrated by Ammiel Mendoza.
Shulamith's Namesake
Leaneagh: "Like many things in my life, it's a regretful decision [laughs] — no, just kidding. It's named after this woman [Canadian feminist] Shulamith Firestone. At the moment of creating the record, we wanted to move forward, but not with vain pop-star distractions, fame, [or worrying about] being cool, fashionable, or writing hits. I wanted to name my record after an outcasted woman who died alone, who had brilliant things to say, who wrote a book with all the things I tried to say on this record lyrically."
Poliça's Quincy Jones
Christopherson: "It's kind of a strange band because of Ryan's element — he contributes the electronics and the basis of the songwriting with Channy. Personally, for my whole life, he's probably been my biggest musical inspiration as a person. To say that Ryan is our influence behind this project is true, and we're kind of in that same boat together. The music does very much start with his contribution. He's our Quincy Jones or George Martin."
Leaneagh: "It's great to do interviews, because we're like 'You have to ask Ryan,' but you can't ask Ryan. I think all of us — even Ryan — would say that you don't want to be influenced by anything too much. You don't want to steal from anything. But, you're also influenced by everything. You have millions of influences from the time you're born — Joni Mitchell or gospel music or funk. You're trying to create some order in the chaos by writing down all these sounds that are coming in your brain constantly, and creating something that's organized amongst all the noise you have."
Advertisement
The Perfect Drink
Christopherson: "We did find early on that one good way to find something fun to do was to find the best cocktail bar we can and just go to it. It's led us to some really cool places. Eau de Vie in Sydney, The Nightjar and Callooh Callay in London, the Vintage Cocktail Club in Dublin — wherever we were Jena, Germany, there was a great outdoor place there. We still haven't found the golden place in New York yet that can touch any of those."
All clothing by Denim & Supply by Ralph Lauren, available at Denim & Supply Ralph Lauren. On Drew: Red & Black Flannel Shirt, $79.50; Black Rosborough Slim Fit Denim, $ 89.50; Black Jersey Tee Shirt, $29.50; On Channy: LS Cardigan, $225; Brodsky Skinny Boyfriend, $125; On Chris: Faded Chambray Shirt, $ 69.50; Slim Fit Denim, $98; On Ben: Black Chambray Shirt, $98; Jefferson Slim Fit Denim, $185.
Unbothered
Actually, Netflix, Content Like Dave Chappelle’s Transphobic Come...
Update: Netflix has fired the employee who was organizing an upcoming walkout (set to happen Wednesday, October 20) of trans staffers and allies in protest
by Kathleen Newman-B...
Unbothered
Years After Her Death, The Science Community Is Still Treating He...
In the 1950s, a Black woman named Henrietta Lacks walked into Johns Hopkins Hospital to be treated for cervical cancer, and her cells would go on to b
by Ineye Komonibo
Somos Libres
Why Black Puerto Rican Women Are Leading an Anti-Racist Media Ren...
While the 2020 Census was essential to many communities across the United States, it held a different meaning for Puerto Ricans. Battered after a decades-l
by Frances Solá-Sant...
Advertisement
Unbothered
R. Kelly Facing Life In Prison After Being Found Guilty Of Racket...
This story contains discussion of sexual violence. Please proceed with care. Updated September 27, 2021: Months after being charged and indicted for nine g
by Ineye Komonibo
Unbothered
Jennifer Hough’s First On-Air Interview About Nicki Minaj &...
*Editor’s note: this story contains discussions about sexual violence, threats, and intimidation. Please read with care.  A month after publicly all
by R29 Unbothered
Unbothered
CBS Will Now Turn Its Controversial Activist Competition Series I...
Updated September 16, 2021: After a wave of backlash followed the announcement of its controversial new series, CBS is going back to the drawing board to r
by DarkSkyLady
Unbothered
Megan Thee Stallion Wins Two Big Legal Victories — Against Her La...
Megan Thee Stallion scored two major legal wins this week, after a judge granted her the go-ahead to release the remix of BTS’ Butter that she is feature
by Tayo Bero
Unbothered
American Idol Alum Syesha Mercado Is Still In The Midst Of...
Singer and American Idol alum Syesha Mercado has regained custody of one of her two young children who were taken from her by authorities in Florida. Merc
by Tayo Bero
Unbothered
The Woman Assaulted By Nicki Minaj’s Husband Is Setting The Recor...
*Editor’s note: this story contains discussions about sexual violence, threats and intimidation.  Jennifer Hough —  who was assaulted by Nicki Minaj?
by Tayo Bero
Entertainment News
What You Need To Know About R. Kelly’s Trial That’s B...
This story contains discussion of sexual violence. Please proceed with care. On August 18, singer and producer R. Kelly will finally face trial for a litan
by Natalie Morin
Entertainment News
‘Self-Made Legend’: Lil Nas X On Being A Gay Icon And...
Lil Nas X has had an amazing year but like anyone in the early stages of a career on the rise, the journey hasn’t come without its share of struggles, do
by Tayo Bero
Entertainment News
Britney Spears’ Dad Is Finally On His Way Out Of Her Conservatorship
In a surprising and sudden development in Britney Spears’ ongoing conservatorship battle, her father has finally decided to step down from her conservato
by Natalie Morin
Advertisement
Advertisement
Discover
R29 Stories & News
Watch
R29 Original Series & Films
Shop
R29's Most Wanted