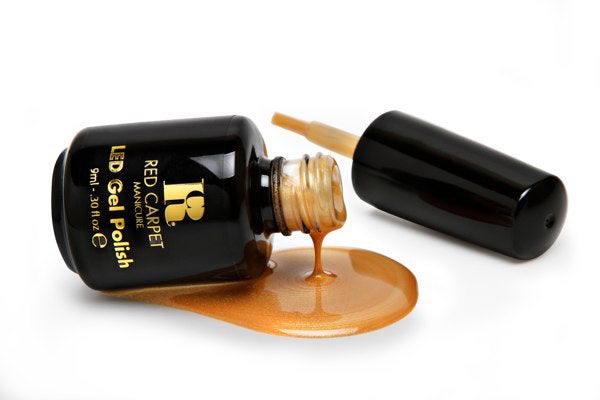 We're all for a cool-looking mani, but this is ridic: Rihanna's gilded Grammys' nails reportedly cost a whopping $5K. When we first saw RiRi's gold nails, we just thought they were a really pretty metallic shade, and that was that. Truth be told, we were much more interested in Adele's Louboutin digits, so we didn't give Rihanna's seemingly tame tips much thought. Then we found out that her manicurist, Kimmie Kyees, used a gel polish that retails for $5,000 a bottle. Made by Red Carpet Manicure, the Amor 24 Gel Polish is an at-home gel polish that contains a full ounce of 24K gold.
Advertisement
While it's an undeniably pretty shade, we don't see anything truly astonishing that would justify its hefty price tag. We've seen plenty of very similar, pale gold metallics for a literal fraction of that cost. Rihanna, girl, we know you've been all about the yellow diamonds and living the high life lately, but we can't say we're with you on this one — it just seems excessive. (Radar)
What do you think of Rihanna's midas touch manicure — ostentatious or amazing?