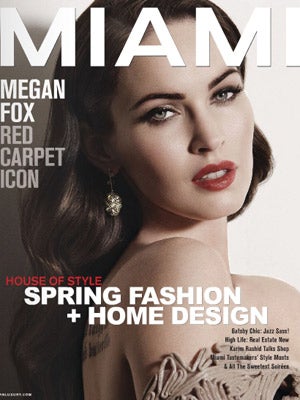 Megan Fox claims to have been bullied in high school. She also loves comic books and believes in her "Carrie-like ability to make things happen" (and we don't think she is talking about the SJP character). Megan Fox, according to the most recent issue of Miami Magazine, is a total nerd. Which, alongside her bombshell good looks and penchant for honestly putting her foot in her pout-ready mouth, makes her even cooler (and justifies our secret love for camp-fest Jennifer's Body even more). The star, who has shrank from the spotlight after her very-public beef with Michael Bay (plus focusing on her marriage to Brian Austin Green), spoke out to the magazine about her rise to fame, her love of The Wizard of Oz, and her Port St. Lucie upbringing. So, yeah, she's done her share of weirdo things, but we kind of like her quirk and sass — plus her ultra glam '40s-inspired shoot — and dig her hometown South Florida love. [Miami Magazine]
Halloween
The Best Spooky, Scary Halloween Movies On Netflix Right Now
by Rosie Knight
Music
New Music To Know: It’s Getting Spooky Out Here
As if Fridays weren’t your favorite day already, Refinery29 will also be gathering the best new music out each week, and breaking down why each track des
by Ineye Komonibo
Unbothered
Our Favorite Black Women Authors Share The Books That Impacted Th...
The annual Well-Read Black Girl Festival is upon us, and this time, it’s going virtual from November 6-8. An ode to Black Political Power: Past
by Stephanie Long
Pop Culture
Matthew McConaughey On The “Sexual Tension” Between B...
Matthew McConaughey has always seemed like the kind of guy who will give it to you straight. Maybe it’s the Texan in him, or maybe it’s the fact that h
by Natalie Morin
TV Shows
Every Side Character & Sly Cameo In The Mandalorian Season...
by Kelsea Stahler
Entertainment
The New Season Of Grey’s Anatomy Could Be Its Very Last
After the coronavirus pandemic shut down Hollywood and halted production of Grey’s Antaomy, the cult favorite series will be returning for its sevent
by Ineye Komonibo
Ariana Grande
The Heartbreaking Mac Miller Moment You Might’ve Missed On Ariana...
If Ariana Grande’s newest album Positions were a person, instead of being 70% water, they would be 70% horny. The singer’s sixth full-length tells the
by Natalie Morin
Best of Netflix
Why The Twist At The End Of Netflix’s His House Is...
This story contains spoilers for His House, available to stream on Netflix October 30.  At first glance, Netflix’s His House appears to be your typical
by Anne Cohen
Ariana Grande
Breaking Down Ariana Grande’s Horniest Positions L...
Ariana Grande has officially concluded the thank u, next era — one in which she was owning her newly single status and giving herself space. Now we’
by Natalie Morin
Entertainment
Kanye West’s Birthday Gift To Kim Kardashian West Was Sent...
Kim Kardashian West turned 40 last week, and her birthday celebration was, in true Kardashian fashion, absolutely over the top. But the most ridiculous thi
by Ineye Komonibo
TV Shows
Watch The New Girl Halloween Episode. It Predicts The Enti...
“You want to know why I don’t like haunted houses?” Nick Miller (Jake Johnson) asks halfway through New Girl’s first Halloween episode, the aptly t
by Ariana Romero
TV Shows
You Have 6 New Netflix Treats To Binge This Weekend — Here’s What...
by Ariana Romero
Discover
R29 Stories & News
Watch
R29 Original Series & Films
Shop
R29's Most Wanted