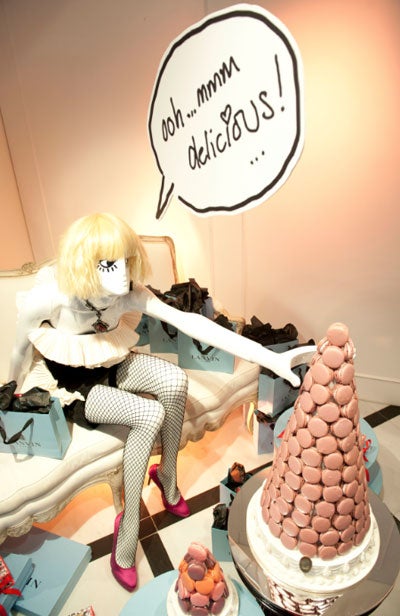 We couldn't say it better ourselves when it comes to the mannequin in Lavin's Madison Avenue boutique's window: "Ooh, mmm, delicious." She's talking about the brand's limited-edition collaboration with famed French pastry house, Ladurée, a limited-edition box of 8 macarons in 3 colors, available right now... while supplies last, that is.
The flavor? Bubblegum, of course! Apparently, Lavin's designer, Alber Elbaz, approached Ladurée with the idea, based off his favorite childhood LD flave. Though Ladurée never actually made a Bubblegum treat, the power-that-be couldn't resist putting his faulty memory to the test, and the result is, to say the least, bubblicious. To top off the chewy confection, Elbaz's playful sketches of French mademoiselles decorate an exclusive box, which is almost guaranteed to be a collector's item. (Plus, don't forget to stop by the store to peep the one-of-a-kind window display — it's parfait for Instagramming.) We tried the new treats last week at Lavin's NYC cocktail party to launch the très chic team-up, and they're definitely unlike anything we've ever tasted. If you're looking for a bibelot for your kitchen, or you're just in the mood for some candy, these macarons are sure to make the Doublemint twins jealous — after all, they do double your fun.
Advertisement 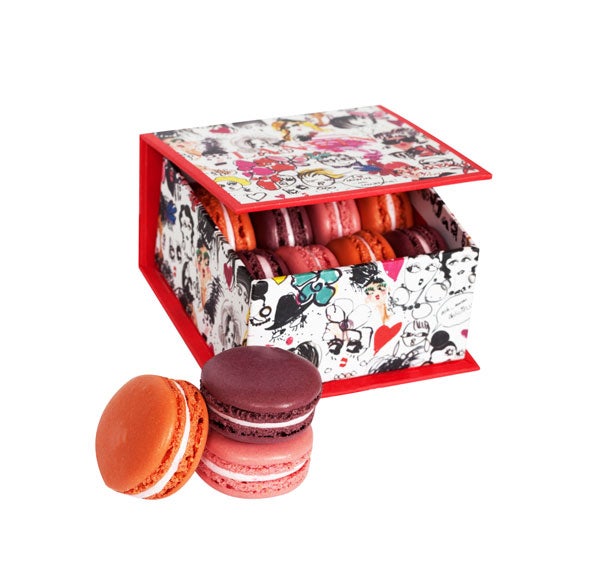 Most Wanted
W&P Has The Cutest Kitchen Accessories On Sale — & They’re ...
If food storage makes you as excited as it makes us, then you’ll drool over W&P’s selection of minimalist food and drink containers. The brand offe
by Victoria Montalti
Most Wanted
This Japanese Snack Box Is The Sweetest Valentine’s Day Gift
As I’m writing this, a roundtrip fare from New York to Tokyo will run you a minimum of $2,355 — a hefty price to pay, to be sure. In the likely event t
by Karina Hoshikawa
Somos Latinx
These Latina Food Creators Are Helping Us Preserve Latin American...
I’ve never been one to miss a meal. Growing up Honduran in the Bronx, tortillas de harina, pollo guisado, enchiladas, and machuca (or hudutu, as my famil
by Janel Martinez
Advertisement
Food & Drinks
Take A Break From The Grocery Store Routine & Try A Meal-Delivery...
Everything you need to know about all the meal delivery and food subscription services on the market.
by Elizabeth Buxton
Dedicated Feature
7 Lighter Drink Options That Don’t Sacrifice Flavor
by Kate Fane
Food & Drinks
The 24 Best Online Bakeries For Ordering Sweet Treats
by Brianna Arps
Home
8 Slick Nonstick Cookware Sets That Don’t Have Abandonment ...
by Alexandra Polk
Shopping
Golde’s Founder Wants To Make Your Wellness Routine Feel Ea...
You’re reading an On-Site Shopping story — meaning you can browse, add to cart, and actually purchase the product recommendations featured below withou
by Jinnie Lee
Food & Drinks
I Tried Avaline, The Celeb-Founded Wine Brand That’s Actual...
Before celebrity beauty brands began to explode in popularity, famous faces were slowly entering the wine and spirits chat. These days, you can sip on Post
by Karina Hoshikawa
Food & Drinks
MSG Belongs In Your Cooking — Especially At Thanksgiving
Hot dogs for Fourth of July. Ham at Christmas. We’ve long associated certain dishes with our favorite holidays, and no federal day off lends itself to th
by Melissah Yang
Somos Latinx
I’m a Latina Who Can’t Cook & I Refuse to Feel Guilty
Ya van llegando las fiestas de fin de año, y con eso llega la comelona y el alboroto. But for me, the holidays also bring something else: an emphasis on t
by Ashley Garcia Lez...
Most Wanted
The Always Pan & Its Cheerful Kitchen Pals Are At Their Lowest Pr...
The Always Pan from kitchenware start-up Our Place is so named because, well, you can always use it. Designed to be the final word in multi-use cookware, t
by Marshall Bright
Advertisement
Advertisement
Discover
R29 Stories & News
Watch
R29 Original Series & Films
Shop
R29's Most Wanted