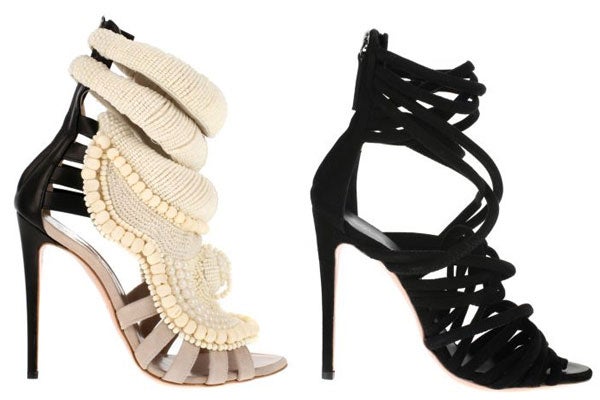 Kanye West's fashion cred is certainly established (ridiculous, maybe, but nonetheless established), even though his first two shows in Paris were received rather coldly. (Of course, there were enough headlines to make even a Hilton happy, but the actual clothes garnered little critical praise.) So, it might be unsurprising that Karla Otto has confirmed that Kanye will not be showing in Paris this time around. The PR house did not say whether or not the line was being discontinued — just that we wouldn't be seeing it in Paris.
While his runway efforts were somewhat a bust, Kanye's collab with Giuseppe Zanotti, though expensive, turned out pretty darn great, so hopefully the rapper isn't bowing out of the fashion world entirely. Maybe he's taking a break, regrouping, and then relaunching in New York? Just please guys — for the love —no Kimye for Kohl's. (WWD)

Designer Collaborations
Ashley Park x Rent The Runway Collab Includes A Dress Featured In...
Ahead of the holiday season, a new collection is here to satisfy your party dressing needs, courtesy of Emily in Paris star Ashley Park and Rent The Runway
by Irina Grechko
Best New Fashion Designers
Meet The CFDA Awards’ American Emerging Designer Of The Year
Back in September, when designer Elena Velez held her second ever fashion show during New York Fashion Week, Uncut Gems actress-turned-It-girl Julia Fox wa
by Frances Solá-Sant...
Designer Collaborations
Serena Kerrigan Wants You To Buy Her Studs Collaboration “F...
“I’m the Queen of Confidence, and I saved you a seat at my throne.” In the last two years, no creator has preached the message of self-love more
by Irina Grechko
Advertisement
Designer Collaborations
Barbour Reimagined Its Signature Jacket For The #GanniGirl Era
In a style landscape teeming with British-grown talent — from veteran brands like Vivienne Westwood and Alexander McQueen to up-and-comers like Molly God
by Amanda Randone
Fashion
How Good American Became A Go-To Brand For Plus-Size Denim
Over the course of the past week, women have taken to social media to share their stories of strength, perseverance, and identity, from being fat-shamed th
by Gianluca Russo
Fashion
Colombian Designer Kika Vargas Is Building A Better Future Throug...
Long before launching her namesake label, Kika Vargas dreamed of designing clothes that were inspired by and rooted in her Colombian heritage. The Bogotá-
by Frances Solá-Sant...
Fashion
Capsule Closets Are The Future Of Fashion, According To Saint Lau...
Over the past few years, fashion has become a revolving door of trends and “aesthetics” that have relegated personal style to an afterthought. The appr
by Frances Solá-Sant...
Unbothered
This Self-Taught Jewelry Designer Is Redefining Black Luxury
Creating luxury jewelry takes art and craftsmanship. Black-owned brand KHIRY — known for its representational take of Blackness and storytelling within t
by Venesa Coger
Designers
How Amanda Forastieri Is Helping Revive Puerto Rico’s Garment Ind...
Even before launching her namesake brand earlier this year, Puerto Rico-born designer Amanda Forastieri has used fashion as a tool of political and cultura
by Frances Solá-Sant...
Style
Skims’ Sold-Out Swim Collection Is Coming Back — Is It Wort...
When the debut Skims Swim collection launched in March, it didn’t take long for the entire swimwear line to sell out. This was not entirely surprisin
by Irina Grechko
Designers
“Virgil Abloh: ‘Figures Of Speech’” Exhibit Invites Viewers To “Q...
Question everything: This was the motto of the late fashion designer Virgil Abloh. It was also the thought running through my head as I walked through the
by Irina Grechko
Designers
Why This Jellyfish-Like Silhouette Is My Style Go-To
Post-college, I was in dire need of a paying job while attempting to pursue an editorial career and it just so happened that the Pleats Please Issey Miyake
by Diana Tsui
Advertisement
Advertisement
Discover
R29 Stories & News
Watch
R29 Original Series & Films
Shop
R29's Most Wanted