Skip navigation!
Story from Politics
JT calls to mind many different things: great leather jackets, trembling falsettos, certain body parts in boxes, and — we have to be fair, because it did happen and we refuse to forget — frosted tips. But white-oak cutting boards? Blue-glazed earthenware? Butterfly art? Yeah, not so much.
So, a new collaboration between Justin Timberlake and HomeMint.com, sister site to the Olsen-helmed StyleMint, the Kate Bosworth-helmed JewelMint, the Rachel Bilson-helmed ShoeMint, and the Jessica Simpson-helmed BeautyMint, is just confusing. Justin teams up with his good friend, decorator Estee Stanley, to offer discounts, goodies, and deals with a European vibe (think Axel Vervoordt and Christian Liaigre). We figure that Estee is the one doing the heavy lifting in this collaboration, but that doesn't mean JT doesn't have an architectural bone in his body. He says: "I’ll sit and I’ll look at hardware for hours. Literally, for hours." Funny JT, we so often say the same thing about you! (Elle Decor) 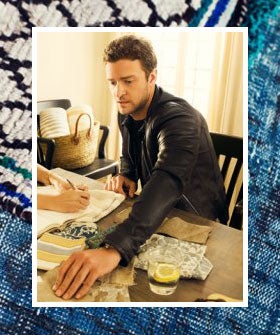