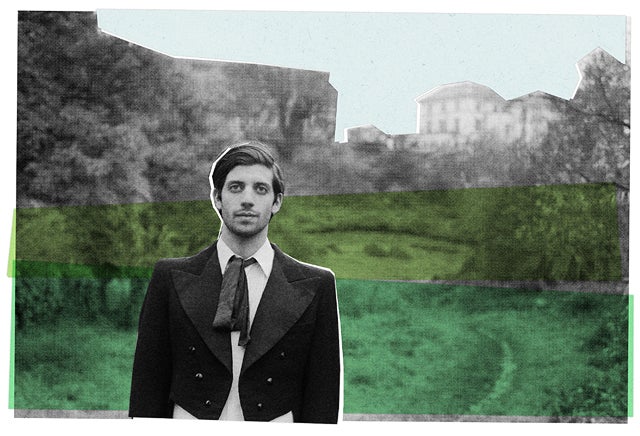 Photo: Courtesy of Joe Reuben. Illustrated by Ammiel Mendoza.
Joseph Reuben is a hard guy to pin down. His music includes orchestral compositions, lyric-based pop, and the occasional ukulele, which he's performed everywhere from the majestic Petersham House in London to Brooklyn's DIY venue Glasslands. And, while he calls short films and television ad soundtracks his bread and butter, he's equally at home writing ballets. But with influences like electronic producer Jon Hopkins and contemporary classical composer Max Richter, he's — like we said — hard to pin down. Sifting through his ever-expanding catalog, it's difficult to imagine how he finds the time for it all. We caught up with Reuben to talk about his myriad projects, upcoming plans, and splitting time between New York and London.
Advertisement

Like Mother, Like Son
"My mom is a musician — not like a professional or anything, but she played guitar and was constantly singing. My dad used to bring home bongos from Africa and things like that. It wasn't any particular artist that inspired me — it was more my surroundings. It just became a way to express myself."

Building Blocks
"I write many different types of music. Sometimes I write songs that have words that will be accompanied by music. Or, I'll compose music for a film or a ballet, or something like that. Usually, I'll write a simple piano thing. Then I'll have some strings in mind and build it up from there...I can add some lyrics on top — a vocal melody. I keep building up. I'm constantly writing for new things. I just finished recording an instrumental EP. It has quiet electronic and orchestral elements to it. I'm going to be releasing that this fall. I wrote a ballet that will be performed early next year in London."

"Call Your Girlfriend"
"I heard it with [my friend] in New York. We were together, and she had been playing the song — she had a broken heart or something. We were a little bit drunk together, and she was quite sad. I didn't really get the emotional part of the song until a little bit later on. I had my heart broken. Then I saw that song from my own point of view — my own personal feelings, and that allowed me to cover it. I put a lot of heart into that."

A Tale of Two Cities
"You can't really escape New York, even if you go to Central Park or DUMBO — somewhere that's a bit quieter. When I'm in New York, I'm in Williamsburg, which is kind of a bit quieter than the city, but it's still pretty hectic...I get a lot of energy, but when I'm in London, it really gives me time to refine [my music]. To really listen to stuff that I'm making."

Petersham House
"It's this really gorgeous, stately home in Richmond in London. They often hold shows and different performances. The owners got in touch with me and wanted to put a performance together. Usually, when I'm playing a show, it's my songs or my instrumentals or my film scores, but never my collection of works as one, so it was a really great place to showcase all of my works together. It was quite an intimate show. There were about 200 people in a beautiful ballroom. I had a quartet with me. I was playing piano and singing and also played a bit of ukulele. It felt like a living room, almost, to be able to connect with all those people."