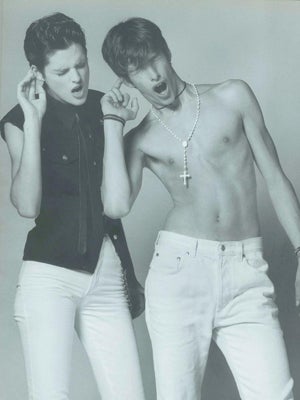 With quite a number of designer shifts over the past couple months, more new appointments are beginning to shuffle into place. In this case, one London Fashion Week fixture is stepping into the shoes of another at the Donatella Versace-led diffusion label, Versus. Following Christopher Kane's departure, J.W. Anderson is next in line to collaborate on the upcoming collection for the Versus label.
Recently celebrated for his Topshop collab, Anderson will now be joining Versace's team to create a capsule collection set to debut in New York next spring. Drawing away from the traditional fashion seasons, WWD also reports Versus' desire to create a "season-less" line that caters to a more digital age, according to Ms. Versace. While Kane's former place at the Italian fashion line lasted an impressive six seasons, the future of Versus may seem more like a designer revolving door, as they plan to collaborate with more young talent with each collection. And Anderson, whose four-year-old namesake label has many enthusiastic fans (including us), is undoubtedly a smart choice to kick it off. (WWD)

Advertisement
Fashion Week
If The Shoes At Eckhaus Latta Looked Familiar, Here’s Why
No matter how zany, disruptive, and out-of-left-field fashion shows get, one thing has always been consistent: Fashion shows present new clothing from a si
by Eliza Huber
Designers
While Other Designers Are Abandoning NYFW, Rodarte Makes A Big Re...
It’s been two and a half years since sisters and designers Kate Mulleavy and Laura Mulleavy of Rodarte participated in New York Fashion Week, with their
by Sara Radin
Fashion Week
Proenza Schouler Proved That Sometimes Less Is More On The Runway
In an industry where designers are always looking for ways to one-up each other, whether it be through overly extravagant show locations or triple-digit co
by Eliza Huber
Fashion Week
Christopher John Rogers On Coming Out On Top After Getting Laid Off
At just 26-years-old, Christopher John Rogers is a CFDA/Vogue Fashion Fund winner; has dressed the likes of former First Lady Michelle Obama, Tracee Ellis
by Eliza Huber
Rihanna
Rihanna Outdid Herself (Again) With Fenty’s 1st Drop Of The Decade
by Eliza Huber
Fashion
As The Olympics Approaches, Nike Launches “Rawthentic Modernity” ...
With the 2020 Tokyo Olympics only five months away, Nike has announced its plans to make this year’s games the most sustainable ever. As reported by Brit
by Sara Radin
Valentine's Day
This Valentine’s Day, Buy Yourself A Vegan Coat To Support Animals
Apparis, the faux-fur vegan coat company that’s beloved by street style stars and animal rights activists alike, has announced a new partnership with PET
by Sara Radin
Fashion Week
Tanya Taylor Opts Out Of NYFW; Releases 5-Part Comedy Series Instead
by Eliza Huber
Best New Fashion Designers
Rihanna’s Footwear Designer Made The Most Popular Shoe In The World
Amina Muaddi, the designer behind Hailey Bieber and Katie Holmes’ favorite crystal sandals, is on a roll. Not only did her entire line sell out in just o
by Eliza Huber
Fashion News
New York City Government Is Getting Involved With The Fashion Ind...
It’s no secret that the fashion industry — despite some attempts at progress — is still often quite insensitive about race. While brands like Gucci,
by Sara Radin
Plus-Size Fashion
Gabi Fresh’s New Campaign With Swimsuits For All Is A Tribute To ...
by Eliza Huber
Lingerie
Parade’s Newest Underwear Collection Is Silky Mesh
Following a covetable crystal-covered panties collaboration with Swarovski, sustainable underwear brand Parade has debuted a brand new collection called ?
by Sara Radin
Discover
R29 Stories & News
Watch
R29 Original Series & Films
Shop
R29's Most Wanted