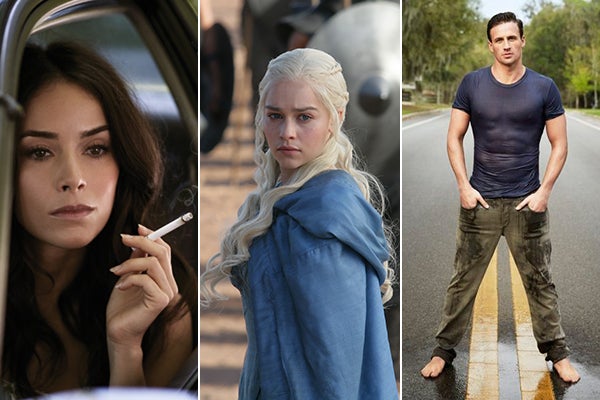 Hump: Even though her character’s name is Amantha (just like, commit to Amanda or Samantha, parents), and the show moves so slowly it felt like I had been on death row for 19 years, Abigail Spencer totally nails it on Rectify, the Sundance Channel’s new drama from the producers of Breaking Bad. Her most recent work (at least in my sphere of interest/notice) has been on
Burning Love
(now on season three on Yahoo...please watch; you won’t be disappointed. No, I’m not a paid spokesperson.), where she plays Annie, the beautiful teacher who’s so normal and sane that all the crazies in the house think she’s the weird one. So, it says a lot about her acting range that Spencer now perfectly encapsulates a woman in a small town in rural Georgia who’s spent the past 19 years living in the shadow of her brother on death row. I totally covet her character’s sundresses, cowboy-esque boots, and illicit affair with her brother’s lawyer.

Advertisement
Marry: Oh man, the end of Game of Thrones this week. It was like “YEAH, I speak high Valyrian, and I know what you’ve been calling me nonstop. NO, you can’t really have my biggest dragon, but you can see what he can do. Now gimme a beat so I can drop this insignificant whip like a BOSS and ride my white horse off into the sunset as I lead my 8,000-plus trained mercenaries on my quest for the Iron Throne. P.S. Hope you like your city deep-fried with a dash of rubble.”
Kill: There isn’t much to say about What Would Ryan Lochte Do? that hasn’t been said a million times before, but I do have a few lingering questions:
1. Did Ryan Lochte’s publicist get him final approval of episodes before they air?
2. If so, did he see the edited version of the first episode, where producers made him look to be of the same intelligence and maturity level as a seven year old, and think “Jeah, this is a good thing to show on national television. People will love me even more after they watch this.”
3. Has anyone else in the history of ever said that What Women Want is their favorite movie? Even the director’s mother won’t say that.
4. Does Ryan have a T-shirt with a hashtag on it for every event/sports game he’s a part of? What if he wants to go to something on the fly but doesn’t yet have a t-shirt for it? Can he go?
Advertisement
5. Can I pitch a show to E! where Ryan Lochte and Kate Upton talk about politics? Moderated by Queen Latifah playing Gwen Ifill like in that SNL sketch, if possible.
6. Has there ever been another strapping twenty-something with a six-pack you’ve been less attracted to?
7. Is this supposed to be a cautionary tale? As in “This is what Ryan Lochte would do in this situation; you should probably do the exact opposite should you ever find yourself in a similar one”?
8. Has Michael Phelps sent him a thank-you note yet? Something along the lines of: “Dear Ryan, Thanks for making me look infinitely better to the American people. I already know what the word 'douchebag' means, but here’s a link to the Urban Dictionary definition if you need it. I’ve also included the actual product in this package. See you in 2016! JK, I’m retired but still own you. Best, Michael #22OlympicMedals Phelps”

Advertisement
Entertainment
The American Idol Auditions Got Off To A Scary Start For K...
Um, remember when the mortifying performances of way-too-confident hopefuls was the most talked-about thing during the early episodes of American Idol? The
by Kaitlin Reilly
Music
The Songs You’re Hearing All Over TikTok In 2020
by Kathryn Lindsay
Pop Culture
Royals No More: Meghan Markle & Prince Harry Officially Drop The ...
Meghan Markle and Prince Harry’s decision to step back from their duties as senior members of the royal family now includes dropping the Sussex Royal tit
by Kaitlin Reilly
Entertainment
Amanda Bynes Would Like To Apologize For Calling Celebrities Ugly...
Former child star Amanda Bynes is starting a brand new chapter. Following a tumultuous period, Bynes is turning a new page in her life — but first, she?
by Ineye Komonibo
TV Shows
Finally, The Friends Cast Admits They Are Doing A Reunion ...
In the words of Lisa Kudrow’s Phoebe Buffay: “Oh my God, that is brand-new information!” After months of teasing a Friends reunion special, HBO Max g
by Kaitlin Reilly
Entertainment
New Music To Know This Week: JAAS Gets That “Therapy,”...
Ever since my first job at MTV working as a music programmer, I can’t stop trying to match people with music they might like. So, I wrote a book call
by Courtney E. Smith
TV Shows
Julia Roberts & Armie Hammer Will Try Their Best Not To Gaslight ...
In a real dream team scenario, Julia Roberts and Armie Hammer are teaming up for a new TV series, which will examine the Watergate scandal from a new angle
by Kaitlin Reilly
Movies
The Scary Dolls From Movies That Haunt Me To This Day
by Elena Nicolaou
Movies
All The British Baes In The New Emma. Movie
by Kathryn Lindsay
TV Shows
Jordyn Woods Just Responded To That Masked Singer Theory
When season 3 of The Masked Singer began earlier this month, it didn’t take long before fans of the show were compiling theories about the celebrities wh
by Ineye Komonibo
Best of Netflix
The Gentefied Cast Points Out The Most Devastating Finale ...
Warning: Spoilers ahead for Gentefied’s season 1 finale, “Delfina.” Netflix’s Gentefied is generally a happy show. As the Morales family realizes t
by Ariana Romero
Entertainment
Emma. Makes Jane Austen As Horny As It Should Be
Warning: This interview contains mild spoilers for Emma., in theaters February 21.  It takes barely ten minutes for someone to get naked in Emma. Geor
by Anne Cohen
Discover
R29 Stories & News
Watch
R29 Original Series & Films
Shop
R29's Most Wanted