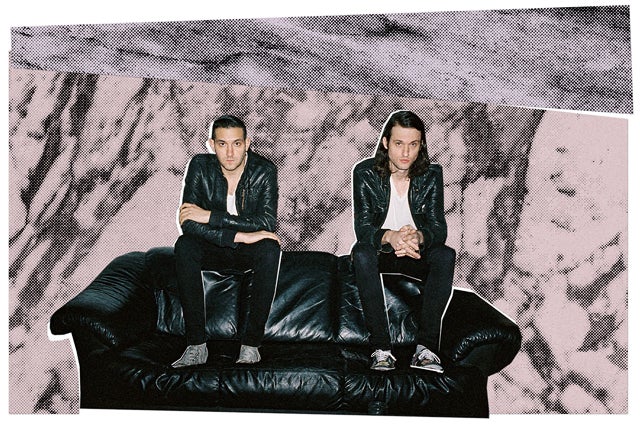 Photo: Courtesy of Harry McNally; Illustration by Ammiel Mendoza.
When Brooklyn synth-pop act Holy Ghost! released its first underground smash "Hold On" back in 2007, no one expected the title to become a mantra for fans awaiting its debut LP. As it turned out, though, it was four years before Nick Millhiser and Alex Frankel released Holy Ghost!'s excellent self-titled first record. As if making up for lost time, the band is back after a relatively snappy couple of years with its sophomore effort, Dynamics. The album, which just saw its release via Brooklyn mainstay DFA Records (home to LCD Soundsystem, The Rapture, Black Dice, and more), imbues Holy Ghost!'s new-disco anthems with a sleeker, more introspective sound. Refinery29 caught up with Millhiser and Frankel to talk the new album, the Brooklyn scene, and collaborative process.
Advertisement
Dance Music vs. "Dance Music"
Frankel: "When we went in, we wanted to make a more direct record, and when I say 'direct,' I mean more minimal, to some degree. When we're making music, we're not thinking about it in terms of drops and builds, which is common when making dance music. For each song, there's definitely a mood, or palette, or sounds and emotions in that song, but they're not necessarily designed to induce dance reactions. We dance to them and bob our heads, but the architecture of the songs isn't the same as a club-banger."
An Album's Album
Millhiser: "In the past, we've set out to make things that were designed to be a 12-inch. We thought of things that people would play out [in a DJ set], but broadly speaking, with this record, we were trying to make a complete [album]. We both grew up with the album format, as antiquated as it may seem in this day and age. We're trying to make a larger body of work that has a function from beginning to end."

Alive and Kicking
Millhiser: "It seems like every time you learn to play the new songs live, it takes awhile of playing them before they really feel right, regardless of how much we've rehearsed them in the practice space. Generally, when we sit down to learn them, we try to learn the songs verbatim, the way we recorded them. Inevitably, through the process of playing them over and over, you learn there are certain things that don't translate well live. Some of the songs have really evolved as a result of playing them live."
A Good Influence
Millhiser: "I listened to Fleetwood Mac in high school, when it was profoundly uncool. Those references have always been there. When we finished the first record, we noticed right away an absence of other palettes or aesthetics that Alex and I listened to all the time and felt that they could be incorporated into the record. Generally speaking, there was an attempt to use a wider palette of sounds and be a little more free to reference things that we didn't on the last record."
Advertisement
Taste Buds
Frankel: "We have pretty similar tastes overall."
Millhiser: "I can't think of a single time when Alex has sent me something or played me something when I've thought to myself, 'Oof, this sucks.' There was a period at the beginning of the record when Alex was coming up with a bunch of demo ideas for songs, and they were all really good — there wasn't any that I didn't like. It was just that I gravitated more toward some. Our tastes are similar enough that I can't imagine a situation where one of us was really excited about something, and the other heard it completely differently."
On the Scene
Frankel: "I'm hesitant to comment on the scene, because I don't feel like a part of it, really. We've always kind of been in an insular world working with our friends. I guess when I first came to Brooklyn and started going to shows, it was Yeah Yeah Yeahs, The Rapture, LCD [Soundsystem], and The Juan MacLean. Those shows sounded really good. Maybe for some of the shows now — and I don't mean this in a bad way — the sound isn't as important. It's more the style of the performer and the attitude and the vibe, so to speak. It feels more cliquey. It feels like more a scene of younger people. I dunno — I rarely go, and maybe I was oblivious because I was younger — but there are so many musicians living here now. Mostly we work with and hang out with our pretty old friends."
Unbothered
Actually, Netflix, Content Like Dave Chappelle’s Transphobic Come...
Update: Netflix has fired the employee who was organizing an upcoming walkout (set to happen Wednesday, October 20) of trans staffers and allies in protest
by Kathleen Newman-B...
Unbothered
Years After Her Death, The Science Community Is Still Treating He...
In the 1950s, a Black woman named Henrietta Lacks walked into Johns Hopkins Hospital to be treated for cervical cancer, and her cells would go on to b
by Ineye Komonibo
Somos Libres
Why Black Puerto Rican Women Are Leading an Anti-Racist Media Ren...
While the 2020 Census was essential to many communities across the United States, it held a different meaning for Puerto Ricans. Battered after a decades-l
by Frances Solá-Sant...
Advertisement
Unbothered
R. Kelly Facing Life In Prison After Being Found Guilty Of Racket...
This story contains discussion of sexual violence. Please proceed with care. Updated September 27, 2021: Months after being charged and indicted for nine g
by Ineye Komonibo
Unbothered
Jennifer Hough’s First On-Air Interview About Nicki Minaj &...
*Editor’s note: this story contains discussions about sexual violence, threats, and intimidation. Please read with care.  A month after publicly all
by R29 Unbothered
Unbothered
CBS Will Now Turn Its Controversial Activist Competition Series I...
Updated September 16, 2021: After a wave of backlash followed the announcement of its controversial new series, CBS is going back to the drawing board to r
by DarkSkyLady
Unbothered
Megan Thee Stallion Wins Two Big Legal Victories — Against Her La...
Megan Thee Stallion scored two major legal wins this week, after a judge granted her the go-ahead to release the remix of BTS’ Butter that she is feature
by Tayo Bero
Unbothered
American Idol Alum Syesha Mercado Is Still In The Midst Of...
Singer and American Idol alum Syesha Mercado has regained custody of one of her two young children who were taken from her by authorities in Florida. Merc
by Tayo Bero
Unbothered
The Woman Assaulted By Nicki Minaj’s Husband Is Setting The Recor...
*Editor’s note: this story contains discussions about sexual violence, threats and intimidation.  Jennifer Hough —  who was assaulted by Nicki Minaj?
by Tayo Bero
Entertainment News
What You Need To Know About R. Kelly’s Trial That’s B...
This story contains discussion of sexual violence. Please proceed with care. On August 18, singer and producer R. Kelly will finally face trial for a litan
by Natalie Morin
Entertainment News
‘Self-Made Legend’: Lil Nas X On Being A Gay Icon And...
Lil Nas X has had an amazing year but like anyone in the early stages of a career on the rise, the journey hasn’t come without its share of struggles, do
by Tayo Bero
Entertainment News
Britney Spears’ Dad Is Finally On His Way Out Of Her Conservatorship
In a surprising and sudden development in Britney Spears’ ongoing conservatorship battle, her father has finally decided to step down from her conservato
by Natalie Morin
Advertisement
Advertisement
Discover
R29 Stories & News
Watch
R29 Original Series & Films
Shop
R29's Most Wanted