Skip navigation!
Story from Politics
Receiving a salary of more than $5 million a year puts you squarely within the 1%. And, in the fashion industry, 67 earners are lucky and industrious enough to see a paycheck that padded. Among them include presidents, merchandising offers, talent officers, and one creative director (Reed Krakoff of Coach Inc., which gives us creatives some hope!), though the large majority are CEOs of large, mass retailers such as JCPenney, Target, and Kohl's. Unfortunately, even though it's the fashion industry, a largely female-centric and -dominated sphere, only six out of the 67 were women (who included execs from Ralph Lauren, The TJX Cos. Inc., Ann Inc., Victoria's Secret Limited Brands Inc., Kohl's Corp., and Target Corp.).
Advertisement
Says Terre Simpson, president of Simpson Associates, "In order to be a CEO, you usually are in your 40s or older. Those generations, the women and men were treated differently growing up. Girls had to behave. You weren't allowed to take chances. It was a different world." What's more, Simpson believes that those already making top dollar don't really care about a few extra million: "None of them have to work for money. It’s the drive for success and accomplishment. They work because of the challenge; it’s not really the compensation, that’s the secondary result of their drive to be challenged," she says.
Here's to not only seeing that ratio balance out in the coming decade, but also more people getting a chance at that pie. Hey — if they're not going to be missing it in the first place ... (WWD) 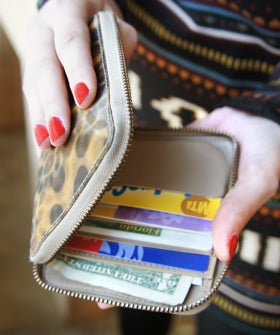 Unbothered
It’s Time To Talk About Kamala Harris, Colorism & Who Gets To Be ...
The inauguration of VP-elect Harris is a beautiful thing for Black women, but we can’t ignore which of us are amplified in America and what that says abo
by Brea Baker
News
How Anti-Abortion Terrorism Fueled The MAGA Attack On The Capitol
Last week, the world watched in horror as a pro-Trump mob, urged by the President himself, attacked the U.S. Capitol in an effort to overturn the results o
by Lauren Rankin
Coronavirus
The Biden Administration Will Change How Vaccines Are Rolled Out ...
Following Joe Biden’s inauguration next week, there will be quite a few changes to COVID-19  vaccine distribution in the country. Under the Biden admini
by Elly Belle
News
Melania Is Celebrating Her “Be Best” Campaign, Even T...
Shortly after the violent attack on the U.S. Capitol, her husband’s second impeachment, and reports that she has not reached out to future First Lady Dr.
by Lydia Wang
News
Pramila Jayapal: “We Don’t Know If We Can Trust Our R...
On Wednesday, Washington Rep. Pramila Jayapal and 231 of her fellow congresspeople voted to impeach President Donald Trump for inciting the insurrection at
by Natalie Gontcharova
News
The Alt Right Is Planning Armed Actions On Inauguration Day. Here...
It’s only been a little over one week since the failed but deadly Capitol coup staged by far right extremists. And there are only five days left until In
by Elly Belle
News
What To Know About Dustin Higgs, Who Is Scheduled To Be Killed By...
With six days left before President Donald Trump leaves office, the United States government is expected to execute Dustin Higgs on January 15. The Trump a
by Erin Corbett
News
Jared & Ivanka’s House Has 6 Bathrooms — Their Secret Servi...
Over the last four years, the Trump family has made everyday life even more difficult for most people, including those working to protect them. In the late
by Erin Corbett
News
Melania Trump Proves She’s Just As Bad As Her Husband, Refu...
Melania Trump has shown, time and time again, that she really does not care about COVID-19 precautions, children detained at the U.S. border, and the irrev
by Lydia Wang
Donald Trump
Apparently Trump Is Now Refusing To Pay For Rudy Giuliani’s...
After making history as the first U.S. president to be impeached twice, it seems that Donald Trump is cutting ties with his most fervent ally: his personal
by Erin Corbett
Donald Trump
Why Isn’t The Senate Voting To Convict Trump Immediately? A...
On Wednesday, exactly one week after the violent attack on the U.S. Capitol, Congress voted to impeach President Donald Trump for the second time. In a his
by Lydia Wang
News
Who Are The Republicans Who Voted To Impeach Trump?
On Wednesday, at least 232 members of Congress voted to impeach President Donald Trump after he incited his supporters to attack the U.S. Capitol (and then
by Lydia Wang
Discover
R29 Stories & News
Watch
R29 Original Series & Films
Shop
R29's Most Wanted