It’s the end of Gossip Girl as we know it, and you know what? Just like Michael Stipe, I feel fine. During the show's inaugural seasons, there's no denying it was a pop culture phenomenon, giving viewers a window through which they could glimpse how the other half lived, cavorted, and treated their maids (I'll miss you the most, Dorota). Blair’s headbands became a national fashion trend. The Parents Television Council got all up in arms over the show’s scandalous “OMFG” ads. Americans who hadn’t seen The Sisterhood of the Traveling Pants were introduced to Blake Lively, she of the perfect golden hair and legs for days, who would become a favorite of Anna Wintour, Karl Lagerfeld, and Christian Louboutin, and go on to become Mrs. Ryan Reynolds.
Advertisement
With Gossip Girl, The CW truly created a new dramatic television subgenre. Every episode either revolved around or featured at least one climactic party/gala/fête/benefit/auction/fashion show/wedding/play that brought all of the characters’ story arcs together. As the show grew in popularity and the costumers had every major fashion label at their beck and call, it truly became the most ostentatious party procedural of our time.
(On a personal note, in 2008, when GG mania was at its peak, I covered an open call for extras who would appear at the Hamptons White Party in the season two premiere episode for New York Magazine (whose Tuesday morning Gossip Girl Reality Index posts were just as eagerly anticipated as new episodes on Monday nights), and it was there that I met my best friend Chris. We always joke that if we ever get married, our Times wedding announcement would say that we met at a Gossip Girl casting. Maybe Cecily von Ziegesar would attend.)
As time went on, however, things took a turn for the absurd. The characters sort of went to college, but the writers didn’t know how to successfully combine the Upper East Side gala-attending lifestyle with a typical university experience, so that kind of fell by the wayside in favor of ascending to the head of their parents’ empires (Blair, Chuck) or suddenly becoming successful business executives (Nate, of all people). They also all kept sleeping with one another. Surely, in all of Manhattan, there are more than two romantic interests available for a gorgeous blonde with a bodacious bod. We were also supposed to care about their parents’ lives, when really those story arcs just reminded us that Dan and Serena were technically step-siblings in an on-again-off-again relationship.
Advertisement
Finally, when all other plotlines seemed to have been exhausted, the characters started trying to figure out who Gossip Girl was. It all became very self-referential (and self-reverential). When Cecily von Ziegesar published the first Gossip Girl novel in 2002, the idea of a website devoted to covering the exploits of a specific group of people was entirely new — Perez Hilton did not launch his site until 2004; TMZ debuted in 2005. By the time the show began exploring Gossip Girl’s identity as a major plotline, viewers were inundated with gossip blogs, and the world had long ago stopped caring about who wrote them. 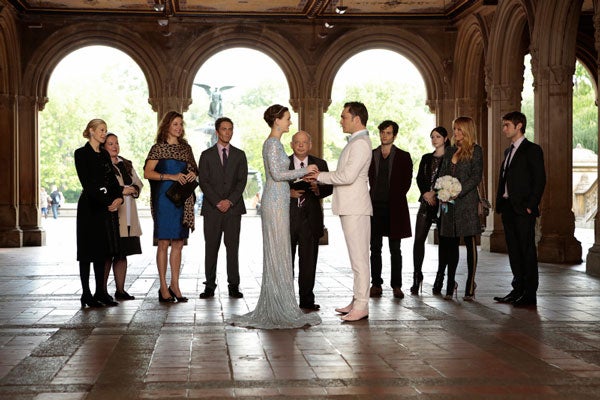 And so (SPOILER ALERT), when it was revealed on the series finale that the person behind the blog was none other than “Lonely Boy,” Dan Humphrey himself, no one really cared. (I, for one, would like to know how he had time to write and publish posts sans smartphone and have a social life. Running a website takes time, people.) The series had always contained a throughline about his outsider-looking-in status. But by the end, it seemed that he was just as much an insider as the upper crusters he’d been chronicling for years, which became even more official when he married Serena (again, technically his step-sister).
Dan didn’t break down any barriers; he merely assimilated into the fold, pulling himself up by his blog-straps. Perhaps Josh Schwartz and Stephanie Savage want this to be the modern-day social success story in the vein of Fitzgerald and Thackeray, who Dan was forever namedropping. Then again, perhaps I’m looking for meaning in a series aimed at teenagers, where there really is none.
Advertisement
But regardless of what the show meant (or didn't mean) to you, it had its place in the zeitgeist. And so, we close the book on another cultural phenomenon, a juicy cult show that paved the way for many more teen dramas focused on the question of what it means to be on the “inside” and have a solidified identity in high school. When it was good, it was addictive and compelling, and when it declined, well, we’ll always have the fashion. Before I sign off, though, I’d like to take a moment to reminisce about some of my favorite WTF Gossip Girl moments. Please listen to this while reading ahead.

— Chuck Bass’ vocal evolution from normal-speaking person to full-on Bale-Batman.
— The threesome with Dan, Vanessa, and Hilary Duff. That happened.
— Valley Girls, the spin-off starring Brittany Snow and Krysten Ritter about Lily’s life as an Almost Famous-style groupie in California.
— The time Serena and Dan got it on in the Jitney bathroom.
— Chuck owned a burlesque club...in high school.
— The notion that Chace Crawford could ever run a successful newspaper, especially in this extremely difficult time in the publishing industry. Oh, and that newspaper had a private plane in the series finale.
— Nate Archibald for mayor. I can’t even process that one.
— At the beginning of every show, Gossip Girl whispers, “Where has she been, Serena?” But like, didn’t they answer that question in the pilot? She was at boarding school. Case closed, everyone.
— The mysterious disappearance of Jenny Humphrey, Eric van der Woodsen, and Vanessa Abrams.
— Serena’s relationship with the guy her mother had thrown in jail for statutory rape.
— Georgina Sparks, just in general.
— Dan’s hair evolution, again, just in general.
— Cameos in the finale: Michael Bloomberg, Jessica Szohr, Willa Holland, Katie Cassidy, Rachel Bilson, Taylor Momsen, Connor Paolo, Wallace Shawn, Lisa Loeb, and Kristen Bell.
— OMFG, they all had iPhones in the finale. It’s about time.

Advertisement
Finally, please humor me by allowing me to close this requiem for a scene in the most obvious way possible:
Who am I? That’s a secret I’ll never tell. Okay, fine, I’m Dan Humphrey, as voiced by Kristen Bell.
You know you loved it.

Entertainment
The Fallout Isn’t Just About Another School Shooting
The Fallout only needs five minutes to completely break you. In the last heart-wrenching moments of the movie, out on HBO Max on January 27, Vada, played w
by Katherine Singh
Unbothered
Love & Hip Hop Gets Rooted In A New Special About African ...
Since its series premiere in 2011, VH1 original reality series Love and Hip Hop has taken music fans all over the country, making stops in New York City, M
by Ineye Komonibo
Unbothered
Millennials, Have We Aged Out Of The High School Genre?
Five years after the series finale of Degrassi: Next Class — the fifth iteration of the popular Canadian teen franchise — HBO Max announced that it wou
by Ineye Komonibo
Advertisement
Entertainment
She Created Her Own Korean Disney Princess Musical & This Needs T...
When most people think of an Asian Disney princess, there’s often one go-to: Mulan aka the Chinese heroine who doesn’t need saving but instead save
by Katherine Singh
Entertainment
How Scammers Became Accidental Antiheroes Of The Girlboss Era
Con artists are nothing new. But our collective interest in them has been piqued in recent years as a number of high-profile scandals have redefined the wa
by Alice Porter
Dedicated Feature
Single Drunk Female — A Must-See Comedy About Sobriety —...
Margarita Mondays. Wine Wednesdays. Happy hours. “Book club.” In a world in which drinking culture is the norm, with holidays (St. Patrick’s Day, New
by Andrea Cheng
Unbothered
In Defense Of Ari Lennox’s Trip to Ghana: The Power and Pro...
Grammy-nominated musician Ari Lennox recently performed at Ghana’s Afrochella music festival and shared her experience in the West African nation on Twit
by Qali Id
Somos Latinx
How Afrobeats Is Musically Bridging Black Latinxs and Africans
The first time I heard Colombian pop singer Maluma’s “Mama Tetema,” featuring Tanzanian singer-songwriter Rayvanny, I was writing a script for VEVO?
by Marjua Estevez
Unbothered
Netflix Has A Hit On Its Hands With The New Cast Of Too Hot To...
Spoilers for Netflix’s Too Hot to Handle ahead. Too Hot to Handle came to us at the beginning of the coronavirus pandemic. It was gloriously-timed conten
by Ineye Komonibo
Unbothered
And Just Like That… Sex and the City Still Doesn’t D...
Sex and the City is such a pop-culture juggernaut that many Black women can make some reference to it, whether it be a love of the Cosmopolitan, a salute t
by Niki McGloster
Unbothered
Still Missing Insecure? These New Black Shows Will Make It...
by Ineye Komonibo
Unbothered
It’s Time For Black TikTok Creators To Be Paid Their Worth
Forbes recently named TikTok’s top-earning creators, including Charlie and Dixie D’Amelio and Addison Rae.
by Venesa Coger
Advertisement
Advertisement
Discover
R29 Stories & News
Watch
R29 Original Series & Films
Shop
R29's Most Wanted