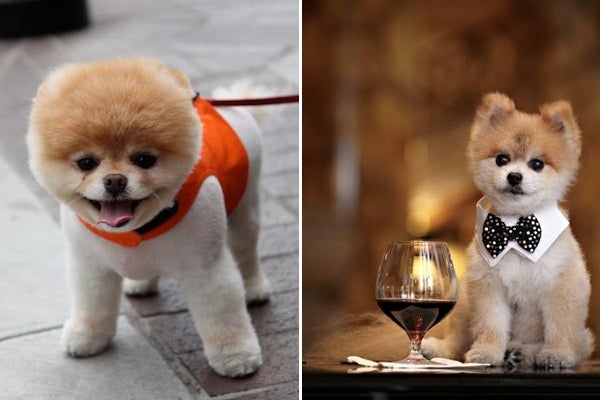 As much as we crave a shiny-new carryall or flip for discounted duds, our one true weakness in life will always be cute-as-a-button canines (um, here’s proof). And one standout pooch that steals our hearts on the reg is the poufy, Bay Area-based Pomeranian Boo. Well, Boo better make room, because there’s another pup claiming a slice of his turf (ruh-roh!). Enter, Gentleman Norman.
This dapper, Boo semi-doppelgänger doesn’t sport “silly costumes and cutesy sunglasses” (fighting words!), but instead opts for golf shirts and bowties. While some might say he's actually the poor man's Boo, Gentleman Norman is claiming he's here to educate peeps on masculinity. Hmm, not sure how that one works. But, apparently Gentleman Norman has just released a tome titled How To Be A Man, in which he divvies out grooming and etiquette tips. The pup is currently touring Neiman Marcus locations and will be rolling through S.F. on July 19, so mark your calendars.
We’re all for welcoming another furry, irresistible pup into our lives, but we’re not sure how Norman stacks up to Boo’s out-of-this-world cuteness. Is he just as loveable or a straight-up knock off? Commenters, we'll let you duke it out!

Music
All The ’90s Jams On The PEN15 Season 2 Soundtrack (...
by Leah Marilla Thomas
Best of Netflix
Netflix’s Ratched Finale Promises A Bonkers Season 2
Warning: Spoilers ahead for Ratched season 1 finale, “Mildred and Edmund.”  When you watch Ratched’s finale on Netflix, you may start feeling su
by Ariana Romero
TV Shows
The Boys Season 2 Soundtrack Is Brought To You By The Le...
by Rachel Paige
TV Shows
Every Painfully Intricate Detail That PEN15 Resurrects Fro...
Hulu’s PEN15 recreates the sights and sounds of the year 2000 with excruciating accuracy, and what’s more ’00s than AOL Instant Messenger
by Leah Marilla Thomas
TV Recaps
R29 Binge Club: The Boys Season 2 Recap
This is not your daddy’s superhero show! If you watched season 1 of The Boys, Amazon’s reimagining of Garth Ennis and Darrick Robertson’s
by Rosie Knight
Music
New Music To Know: A Little Something For Everyone
As if Fridays weren’t your favorite day already, Refinery29 will also be gathering the best new music out each week, and breaking down why each track des
by Ineye Komonibo
TV Shows
The Boys Is Officially Off Book After That Stormfro...
Warning: There are major, MAJOR spoilers ahead for The Boys season 2, episode 5 and The Boys comics. There’s a new member of the Seven in town and though
by Rachel Paige
TV Shows
Here’s The Only Interesting Thing That Happened During The ...
Now that we know that classic E! reality series Keeping Up with the Kardashians will soon come to a close, each episode of the cult favorite reality series
by Ineye Komonibo
TV Shows
Cheer‘s Coach Monica Responds To Jerry Harris’...
Monica Aldama, head coach of the Navarro College cheerleading team at the center of Netflix’s Emmy-nominated Cheer docuseries, has spoken out about s
by Natalie Morin
Entertainment
Seth Cohen Would Not Approve Of Samaire Armstrong Coming Out As P...
Anna Stern and Seth Cohen had a complicated relationship back on The OC, but this is definitely something that Cohen (and Captain Oats) would not be down f
by Natalie Morin
Entertainment
Tayler Montague’s Stunning Short Film In Sudden Darkness...
Tayler Montague was 6 years old when the lights went out on August 14, 2003, in a mass power outage that would come to be known as the New York Blackout. F
by Anne Cohen
Entertainment
Jennifer Aniston & Brad Pitt Truthers Won The Fast Times At Ri...
It’s been 15 years since Brad Pitt and Jennifer Aniston split up for good, but there are still many people who believe that it’s only a matter of time
by Ineye Komonibo
Discover
R29 Stories & News
Watch
R29 Original Series & Films
Shop
R29's Most Wanted