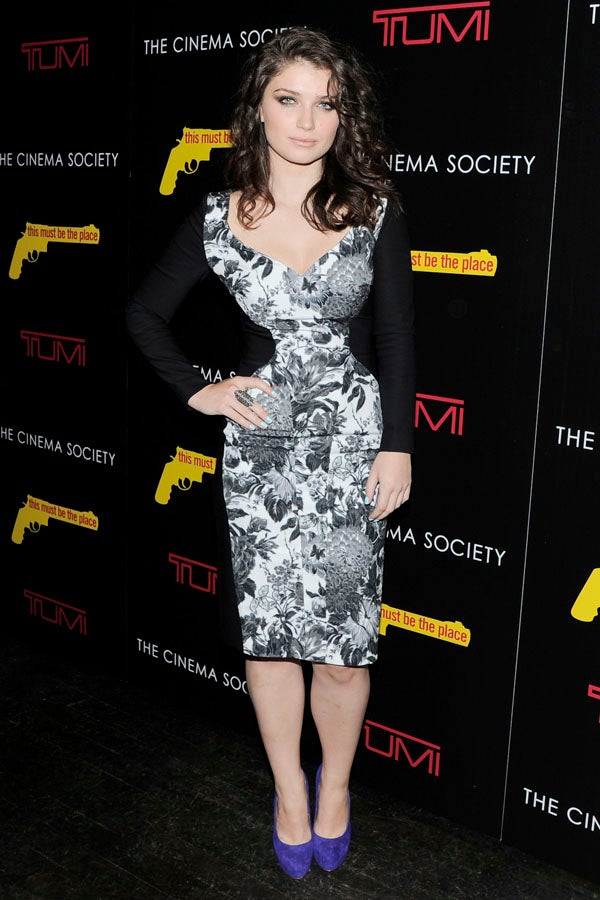 Watching Eve Hewson command a scene with Hollywood royalty Sean Penn and Frances McDormand proves this isn't her first time in the presence of greatness. The 21-year-old Irish actress grew up around legends as the daughter to musician Bono and Alison Hewson. The actress, who also spends time studying at New York University, costars in This Must Be the Place, a gut-wrenching film about aging rock star Cheyenne (Penn), his goth best friend (Hewson), and the search to avenge his late father's Nazi persecutor.
This Must Be The Place, lauded at last year's Cannes Film Festival, was influenced by prominent rock bands of the '80s and '90s, mainly drawing from Talking Heads' David Byrne — who wrote original music for the film, which is named after his song. We chatted with the beautiful Hewson at The Cinema Society and Tumi's screening of The Weinstein Company's latest star-studded movie held at the Tribeca Grand Hotel. She showed up in an ontrend, printed black-and-white Stella McCartney dress and Brian Atwood shoes. And while the super-down-to-earth Hewson talked about working with one of the greatest actors alive (Sean Penn), she shared a tidbit we just had to squeal over: She and her dad are dressing up as crayons for Halloween. Adorable!
Advertisement

How was working with Sean Penn and Frances McDormand? Did they give you any great bits of advice while filming?

"They didn't give me advice as much as they were just kind of amazing people to work with. Frances is an amazing role model. Sean was just such a good time. He was just really generous with me. You know, we had most of our scenes together, so it was really special. I just kind of learned working with him and through watching him."

You sport a very edgy, goth look in the film. Did you listen to any bands in particular in preparing for the role?
"I listened to a lot of Talking Heads, obviously because David Byrne did the music for the film. I had a pretty dark and twisted playlist for a while during filming. There was some Arcade Fire in there. The Cure, obviously. What else? Patti Smith. There was just a whole bunch of different bands."

So, you are currently studying at New York University. Besides acting, what's your favorite subject that you've studied?
"I'm doing a minor in child psychology. So, I think I just got hooked on that. For some reason, I took a class on divorce in America and was obsessed. I ended up taking a few classes on child murderers and crazy baby-killers. It's pretty sick, but I also found it fascinating in a really weird way. They have a really good department, though.

Well, that sounds pretty haunting…
"Yeah! It is really interesting though."

Speaking of which, do you have any funny Halloween costume ideas?
"I don't! I don't know what I'm gonna be yet. My family is coming to New York, so I think we might all be team dressing. We might be dressing as Crayola crayons, as different colors, all six of us."

Photo: Courtesy of The Cinema Society

Advertisement
Best of Netflix
Who Dies In Chilling Adventures Of Sabrina Part 3 — & Who ...
Warning: Major spoilers ahead for Chilling Adventures of Sabrina part 3 finale, “Sabrina Is Legend.”  Supernatural series love a surprise fatal bo
by Ariana Romero
Best of Netflix
Gavin Leatherwood Knows His “Daddy” Sabrina Quote Is Desti...
Gavin Leatherwood is laughing — and speaking in ellipses. It is mid-January and the Chilling Adventures of Sabrina actor is thinking about a line from hi
by Ariana Romero
Best of Netflix
You Have 13 New Netflix Treats To Binge This Weekend — Here’s Wha...
by Ariana Romero
Best of Netflix
Apparently, The CAOS Writers Really Adore Miss Wardwell
If the part 3 of Netflix’s witchiest teen show is any indication, actor Michelle Gomez has some serious fans. The real Miss Wardell (Gomez) is back o
by Martha Sorren
TV Shows
What Is Eric Hiding On A Million Little Things?
This post contains spoilers for the January 23 episode of A Million Little Things.  Whether or not you think Gary (James Roday) was right for breaking up
by Kaitlin Reilly
TV Shows
Grey’s Anatomy Season 16 Mid-Season Premiere Recap: ...
When we last saw the intrepid doctors of Grey Sloan Memorial Hospital on the Grey’s Anatomy fall finale, Bailey (Chandra Wilson) lost her baby, Meredith
by Andrea Reiher
Entertainment
Bailey Broke Down Over Her Miscarriage In Grey’s Most Grip...
Over the 2019-2020 winter break, Grey’s Anatomy proved it could still surprise us by announcing OG star Justin Chambers had left the show. The past tense
by Ariana Romero
TV Shows
Should The New Grey’s Doctor Really Worry MerLuca St...
Can Meredith Grey (Ellen Pompeo) ever really get a break? I mean, it’s her show; she’s the planet that the drama must orbit around, but damn ?
by Lindsay Denninger
TV Shows
Why Amelia Made That Call About Her Baby’s Father On Gre...
Amelia Shepherd (Caterina Scorsone) has a lot of explaining to do to Atticus “Link” Lincoln (Chris Carmack) on Grey’s Anatomy — for st
by Lindsay Denninger
TV Shows
Instead Of Handling Justin Chambers Leaving, Grey’s ...
Something feels amiss on Grey’s Anatomy — not only did the show let fans know that one of the last remaining original cast members Grey’s An
by Lindsay Denninger
Entertainment News
Bachelor Nation Reacts To Tyler Gwozdz’s Sudden Death
On January 22, former Bachelorette contestant Tyler Gwozdz died after being hospitalized following a suspected drug overdose, People confirmed Thursday. He
by Kaitlin Reilly
TV Shows
All The New (& Old) Characters You Need To Know In Star Trek: ...
by Leah Marilla Thomas
Discover
R29 Stories & News
Watch
R29 Original Series & Films
Shop
R29's Most Wanted