If you thought NASA's Endeavor was the fly-est thing to be photographed in L.A. this week, just wait 'til tonight's Emmy red carpet and post-party pose-a-thons! And if you're not the invite-wielding type, the Los Angeles Times
"Ministry of Gossip" (whom we confess, we worship), has kindly offered a psychic glimpse of TV's biggest night of fab fetes, gift bags, and strategic Twittery — along with a hilarious illustrated glance at the seven kinds of people you may meet at all of those parties.

Humorist Maximillian Kornell narrows down the usual suspects: "The Clooney," an A-lister via soap dish, who might have a producing credit on some edgy HBO political doc, and will undoubtedly pose for pics with Peter Dinklage; "The Apex Nerd," an indie blogger with expensive glasses, cheap haircut, and tapered tuxedo pants; "The Vintage Voter," who attends the Governor's Ball in a ball gown, upset that Mary Tyler Moore wasn't nominated, and may approach winners to ask for an in-depth explanation of FX's programming; "The Apatowian," a clever, natural-fiber-suit-clad writer, who's supposedly so funny that it's okay if he doesn't smile; "The Strong Female Lead," from film to critic-approved cable TV, whose perfect blowout can't soften her badass, potential-diva 'tude; "The Crumpet," a tea-swigging, crustless-sandwich nibbling, Mini-Cooper-driving stoic; and "The Tweeting Vampire," who will be nonstop Instagramming (when he's not scouring for True Blood casting agents, that is) in bohemian bracelets and a cropped blazer.
Advertisement
So, whom would you be most excited about running into — "The Clooney" or "The Crumpet"? Nothing against scones, but we're pretty patriotic on this one! If you won't be at one of the prestigious after-parties, now that you know who will be there, you can pretend that you went. We won't tell — in fact, if anyone asks, we totally saw you there! (LA Times) 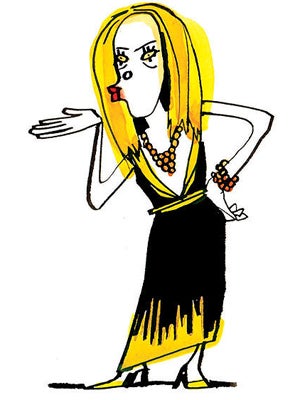 Music
Splish Splash, Here Are All The Songs You Need To Soundtrack Your...
by Courtney E. Smith
TV Shows
The Bachelor‘s Colton Underwood & Cassie Randolph Ha...
Colton Underwood and Cassie Randolph have broken up after almost two years. Underwood, 28, and Randolph, 25, met in 2018 on an unconventional season of The
by Kathryn Lindsay
Best of Netflix
Is That Control Z Character Really Dead After The Finale?
Warning: Spoilers ahead for Control Z season 1 finale, “Public Enemy.”  Most shows would save a confrontation between its Big Bad and its hero for
by Ariana Romero
TV & Netflix
The Space Force Soundtrack Is A Musical Chill Pill
by Martha Sorren
Music
The History Of The "Song Of The Summer" Is A Wild Ride
by Courtney E. Smith
Pop Culture
After Weeks Of Quarantining Apart, Julianne Hough & Brooks Laich ...
Julianne Hough and Brooks Laich are participating in the ultimate form of social distancing: getting divorced. After quarantining apart for the past few we
by Kathryn Lindsay
Entertainment
Space Force’s Mark Naird Is Part Michael Scott, Part...
Michael Scott is back on TV… sort of. Steve Carell’s Space Force character General Mark Naird is based on — at least in title, job function, and
by Martha Sorren
Movies
Dive Into The Best Summer Movies On Netflix
by Elena Nicolaou
Pop Culture
It Looks Like Nina Dobrev Is Dating This Very Famous Former Olympian
There’s no better time to get to know someone than in quarantine, but we know romance isn’t truly real until it’s documented on Instagram
by Kathryn Lindsay
Best of Netflix
Finished Selling Sunset? Stream These Movies As A Palate...
by Anne Cohen
TV Shows
A New 5-Minute Disney+ Show Promises To Calm You Down — And It Ac...
Honestly, everyone could really use a break right now even if just for five minutes. That’s where the new Disney+ show Zenimation comes in. A play on
by Martha Sorren
TV & Netflix
You Can See The Space Force Cast’s Star Power From O...
by Martha Sorren
Discover
R29 Stories & News
Watch
R29 Original Series & Films
Shop
R29's Most Wanted