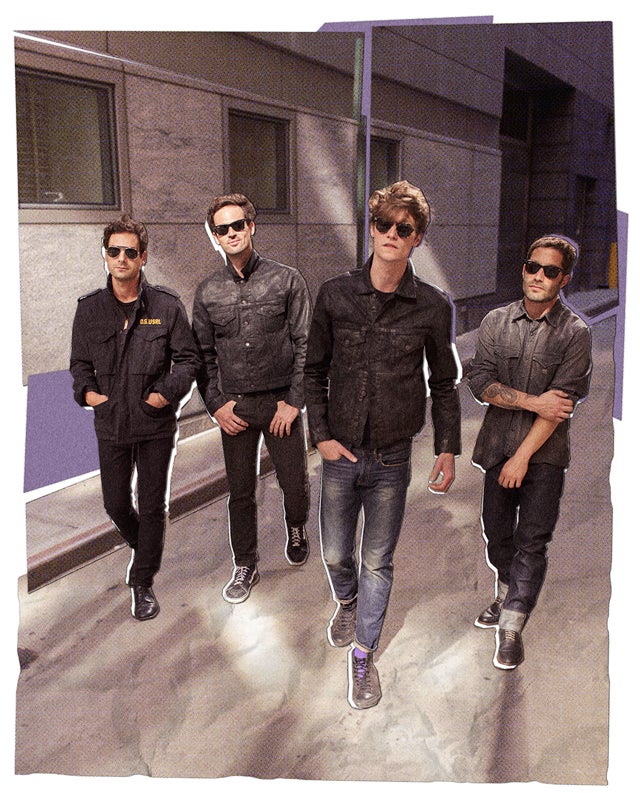 Photographed by Dan McMahon. Illustrated by Ammiel Mendoza.
For a band without an album, Drowners are doing pretty well. The four-piece met while partying in Manhattan and soon realized they had the same taste in music as well as booze. With leather jackets and black jeans, the members exude a sense of Lower East Side cool, but lead singer Matthew Hitt is actually a Welsh transplant. Before joining the band, he worked as a model (he was discovered by a talent scout in Times Square), but has since committed fully to the life of a burgeoning rockstar. We caught up with the band in a Tribeca bar where the members scarfed down sandwiches and pints, as we talked about the band's upcoming debut, its recent tour with Arctic Monkeys, and getting a record deal.
Advertisement
Drinking Buddies
Matthew Hitt: "I moved to New York two years ago and met all these boys through boozing with them, basically. We found out that we all played instruments. We all have a common interest in rock 'n roll music and then could go off on our other tangents."
Erik Snyder: "Everybody had a lot of common ground."
Jack Ridley: "Our friend/photographer/tour manager introduced me to Matt. Matt had known Erik, and I knew Lakis. It was his idea to play. But, yeah, pretty much he'd just come to my bar, Welcome to the Johnsons, all the time. We had a practice place next door."
Arctic Monkeys
Hitt: "We got announced after all the gigs had already sold out, so we didn't know if people would care that we were there. But, when we got to the gigs, I guess we have a crossover fan base, because people were wearing our T-shirts and singing along. I think it was a good pairing in the end, and we had a lot fun."
Ridley: "Every venue was different, but all of them were fun. And, it was more fun from one to the next — Toronto was really fun. It was a really crammed place, and I crowd-surfed three or four times. I hadn't done that in a while, and it felt really good."
Hitt: "Our tour manager, Pete, was the guy who introduced me, and Marcel, our merch guy, was a friend of ours. The tour was just a traveling version of what we do anyway. We were all mates."
Advertisement 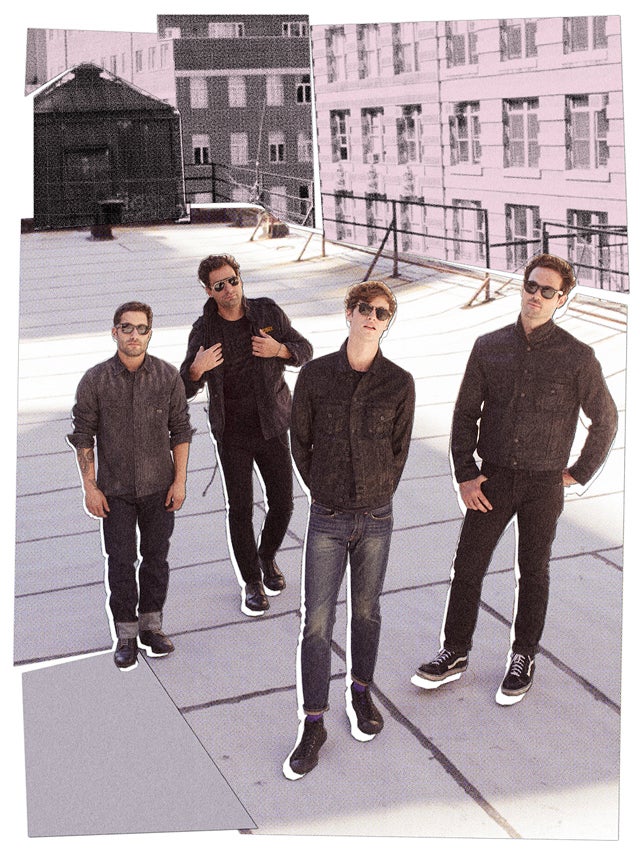 Photographed by Dan McMahon. Illustrated by Ammiel Mendoza.
Frenchkiss
Hitt: "We recorded some demos about two months after we started playing together, and then about nine months later, [the label] Frenchkiss came to see us play a few gigs. We had a few meetings with them, and we liked them. Syd Butler, the owner, was in [Les Savy Fav] and sort of got it more than other people we had met, who seemed a little more industry-leaning. We signed with them almost a year after we sent them our demos."
Dropping the "The"
Hitt: "There was another band called 'The Drowners' from Sweden in the '90s. We had a gig, and the promoter needed a name for the poster. Without googling it, I just said it. Later when I did have the Internet, I found out [about 'The Drowners']. I prefer it without it though. It's snappier. It takes less time to write it down with a pen."
The Future
Hitt: "We play some CMJ shows and then we have a single out in October. We're going to do a couple videos before Christmas, and then the album will come out in January. It's finished now. We did it in about about three weeks in May and June. We've pretty much been playing the whole record on tour. All of the songs existed in a gig setting before we recorded them. It was pretty easy to transfer them to a live setting."
Lakis Pavlou: "They keep changing live. Morphing and creating a life of their own."
Ridley: "Is that that Barclays' Drowners/Stones show, happening still?" [laughs]
Advertisement

Hair and Makeup by Heather Heiman
Unbothered
Brittney Griner Sentenced To 9 Years In Russian Prison For Drug C...
After being detained by Russian police at Sheremetyevo Airport on drug allegations in February, WNBA athlete Brittney Griner has officially been sentenced
by Ineye Komonibo
Unbothered
Say Goodbye To Macy Gray — She Outed Herself As A TERF
On July 4, a day when selective freedom was celebrated in America, it was only fitting that Macy Gray chose to go on known bigot Piers Morgan’s show Unce
by Wisdom Iheanyichukwu
Unbothered
White Supremacy Is To Blame For The Buffalo Massacre. That’s It.
A clip of CNN reporter Victor Blackwell breaking down in tears live on air while talking about last weekend’s horrific massacre of 10 Black people in a B
by Kathleen Newman-B...
Advertisement
Unbothered
Megan Thee Stallion’s Bombshell New Interview Reveals Devastating...
In July 2020, Megan thee Stallion was involved in an intense police stop after attending a celebrity pool party in Los Angeles, leading to the shocking rev
by Ineye Komonibo
Unbothered
Ari Lennox Shares An Update After Her Amsterdam Arrest
Updated December 2, 2019: Days after being detained at Schiphol Airport in the Netherlands, Ari Lennox has resurfaced on social media to give worried frien
by Ineye Komonibo
Unbothered
Two Men Convicted For The 1965 Assassination Of Malcolm X Have Be...
Nearly 60 years after the shocking assassination of civil rights leader Malcolm X, a new development in the investigation into his murder has led to t
by Ineye Komonibo
Unbothered
The Zombification of Whitney Houston
In Haitian mythology, the idea of what we now call zombies emerged from enslaved Africans’ deepest fear: not even death would bring freedom. Though suici
by Brooke Obie
Unbothered
Actually, Netflix, Content Like Dave Chappelle’s Transphobic Come...
Update: Netflix has fired the employee who was organizing an upcoming walkout (set to happen Wednesday, October 20) of trans staffers and allies in protest
by Kathleen Newman-B...
Unbothered
Years After Her Death, The Science Community Is Still Treating He...
In the 1950s, a Black woman named Henrietta Lacks walked into Johns Hopkins Hospital to be treated for cervical cancer, and her cells would go on to b
by Ineye Komonibo
Somos Libres
Why Black Puerto Rican Women Are Leading an Anti-Racist Media Ren...
While the 2020 Census was essential to many communities across the United States, it held a different meaning for Puerto Ricans. Battered after a decades-l
by Frances Solá-Sant...
Unbothered
R. Kelly Facing Life In Prison After Being Found Guilty Of Racket...
This story contains discussion of sexual violence. Please proceed with care. Updated September 27, 2021: Months after being charged and indicted for nine g
by Ineye Komonibo
Unbothered
Jennifer Hough’s First On-Air Interview About Nicki Minaj &...
*Editor’s note: this story contains discussions about sexual violence, threats, and intimidation. Please read with care.  A month after publicly all
by R29 Unbothered
Advertisement
Advertisement
Discover
R29 Stories & News
Watch
R29 Original Series & Films
Shop
R29's Most Wanted