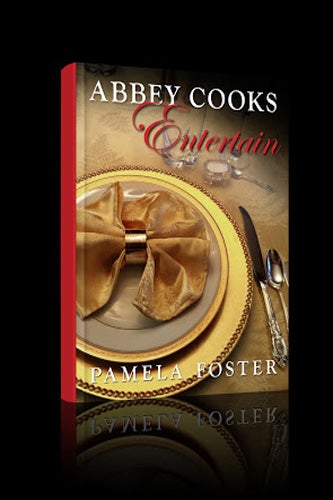 Anna is as true-blue as they come, Thomas is deliciously scheming, and Carson is, well, Carson. But for our money's worth, it's Mrs Patmore, the estate's cook, who is the real stand-out among the Downton Abbey servants. She can plan a dinner party on the fly, doesn't suffer fools, has some of the best lines on the show, and manages to make us modern-day gourmands salivate over the prospect of artery-clogging sauces and kidneys. (Heck, the woman deserves a medal just for not whacking Daisy over the head with a rolling pin.)
And now, those who long to get a taste of the lavish meals the Crawleys feast on while arguing about Irish politics and Bates' worthiness need look no further than Abbey Cooks Entertain, an e-book containing recipes inspired by the hit drama.
Advertisement
Canadian "culinary historian" Pamela Foster created the e-book, which may soon be available in print form, too, after originally documenting the show's traditional British dishes on her blog, DowntonAbbeyCooks.com. Of course, there have been some alterations, with Foster nixing anything overly fried (so long, Scotch eggs) or simply too weird.
"Some of the food, people nowadays just wouldn't like it," Foster says, referring to dishes containing "parts of animals that most people aren't used to eating anymore."
Hey, if it's good enough for Lady Edith, it's good enough for us. All told, there are 220 recipes in the pub, including Mrs Patmore's roast chicken and Cora's beloved apple charlotte.
"I tried to give a flavor of the cuisine," Foster adds "It's nice to give British cuisine a boost in popularity and respect. They were known as the worst cooks in the world."
Yes, we know, we know. But try it anyway. (Business Insider)

Most Wanted
W&P Has The Cutest Kitchen Accessories On Sale — & They’re ...
If food storage makes you as excited as it makes us, then you’ll drool over W&P’s selection of minimalist food and drink containers. The brand offe
by Victoria Montalti
Most Wanted
This Japanese Snack Box Is The Sweetest Valentine’s Day Gift
As I’m writing this, a roundtrip fare from New York to Tokyo will run you a minimum of $2,355 — a hefty price to pay, to be sure. In the likely event t
by Karina Hoshikawa
Somos Latinx
These Latina Food Creators Are Helping Us Preserve Latin American...
I’ve never been one to miss a meal. Growing up Honduran in the Bronx, tortillas de harina, pollo guisado, enchiladas, and machuca (or hudutu, as my famil
by Janel Martinez
Advertisement
Food & Drinks
Take A Break From The Grocery Store Routine & Try A Meal-Delivery...
Everything you need to know about all the meal delivery and food subscription services on the market.
by Elizabeth Buxton
Dedicated Feature
7 Lighter Drink Options That Don’t Sacrifice Flavor
by Kate Fane
Food & Drinks
The 24 Best Online Bakeries For Ordering Sweet Treats
by Brianna Arps
Home
8 Slick Nonstick Cookware Sets That Don’t Have Abandonment ...
by Alexandra Polk
Shopping
Golde’s Founder Wants To Make Your Wellness Routine Feel Ea...
You’re reading an On-Site Shopping story — meaning you can browse, add to cart, and actually purchase the product recommendations featured below withou
by Jinnie Lee
Food & Drinks
I Tried Avaline, The Celeb-Founded Wine Brand That’s Actual...
Before celebrity beauty brands began to explode in popularity, famous faces were slowly entering the wine and spirits chat. These days, you can sip on Post
by Karina Hoshikawa
Food & Drinks
MSG Belongs In Your Cooking — Especially At Thanksgiving
Hot dogs for Fourth of July. Ham at Christmas. We’ve long associated certain dishes with our favorite holidays, and no federal day off lends itself to th
by Melissah Yang
Somos Latinx
I’m a Latina Who Can’t Cook & I Refuse to Feel Guilty
Ya van llegando las fiestas de fin de año, y con eso llega la comelona y el alboroto. But for me, the holidays also bring something else: an emphasis on t
by Ashley Garcia Lez...
Most Wanted
The Always Pan & Its Cheerful Kitchen Pals Are At Their Lowest Pr...
The Always Pan from kitchenware start-up Our Place is so named because, well, you can always use it. Designed to be the final word in multi-use cookware, t
by Marshall Bright
Advertisement
Advertisement
Discover
R29 Stories & News
Watch
R29 Original Series & Films
Shop
R29's Most Wanted