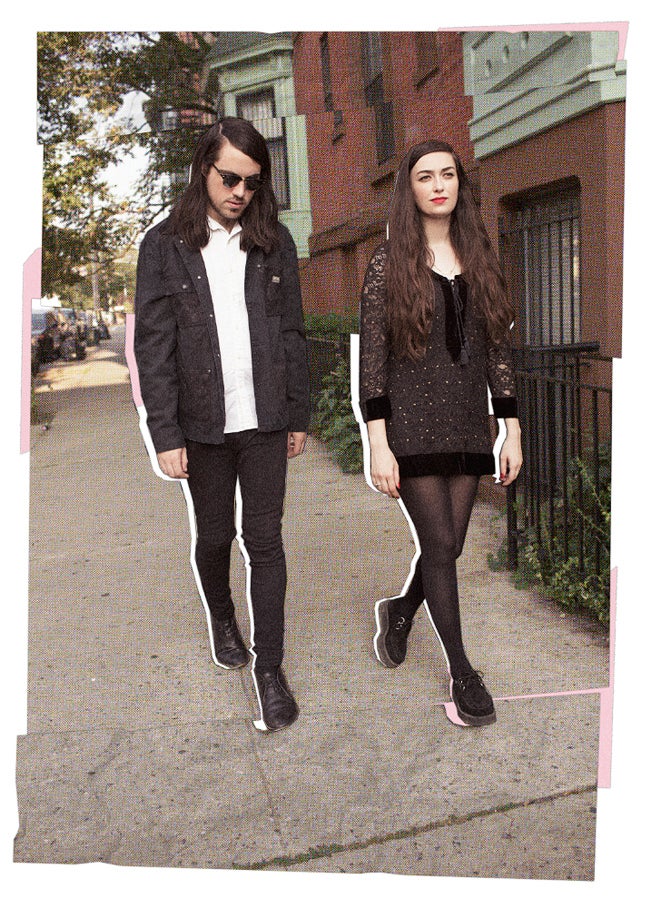 Photographed by Dan McMahon. Illustration by Ammiel Mendoza
Since arriving like a veritable breath of fresh air with “Go Outside” back in 2010, Cults have toured the world, released a hit album, and transformed into an indie-pop juggernaut. Founded by New York-via-San Diego transplants Brian Oblivion and Madeline Follin, while they were still students at The New School, the band joins ‘60s melodies with fuzzed-out guitars for a sound that’s bubblegum-sweet without losing its bite. Now, the duo is readying its sophomore album, Static, for release after years on the road. Filled with more complex arrangements than the first record, Static is still packed with the hooks the band is known for. We caught up with Oblivion and Follin to chat about the band’s sophomore album, free time on tour, and the first shows that inspired them.
Advertisement

Photographed by Dan McMahon. Illustration by Ammiel Mendoza.
Take Two
Oblivion: “In a way, we wanted to make a companion piece to the first record. For us, the first record was all about freedom, starting a new life, and separating yourself from people who aren’t good influences. But, after two years of touring and experiencing a more solitary existence, we wanted to write about the other side of the coin, where you learn to appreciate the things in life you take for granted and try to hold onto the positive influences around you — basically not be such a jerk all the time.”
Cranking It Up
Oblivion: “We played the new songs for the first time last weekend, and I asked our sound guy afterward how it sounded. He was like, ‘It sounds great, but everyone gets twice as loud when you’re playing the new songs, and it’s really hard for me to mix.’ It’s a weird kind of nonverbal way of showing our excitement about playing the new stuff: We just crank it up, which is probably not a good idea.”
City Living
Oblivion: “I just moved down to Chinatown, and I have this little ledge where I smoke cigarettes and [watch] those sightseer busses that drive by all day on Bowery. Everyone stares at me like I’m some weird animal.”
Formative Shows
Follin: “Seeing my brother [Richie Follin]’s old band, The Willowz, because I was still so young, really influenced me. When I saw him, I felt like I wanted to be up there, too.”
Oblivion: “I remember seeing Deerhoof at a little punk collective in San Diego called The Ché Café. Those guys are just true legends. I saw them again at [New York venue] Le Poisson Rouge a few months ago, and it was the same experience. They’re disengaged engagement is very attractive.”
Advertisement
On the Road
Oblivion: “Oddly, the memories that I can go back to most vividly from tour are the moments when we have some extra time — not necessarily the shows. Whether that’s going go-karting or playing a really shitty game of golf. Anytime we get to do something that’s outside the norm, we get reinvigorated, but it’s rare that we get to do that. We’re lucky if we can just get a good regional meal.”
Follin: “We call up whoever we know there and have them take us to the best food.”

Hair and Makeup by Ashleigh Ciucci.
Unbothered
Actually, Netflix, Content Like Dave Chappelle’s Transphobic Come...
Update: Netflix has fired the employee who was organizing an upcoming walkout (set to happen Wednesday, October 20) of trans staffers and allies in protest
by Kathleen Newman-B...
Unbothered
Years After Her Death, The Science Community Is Still Treating He...
In the 1950s, a Black woman named Henrietta Lacks walked into Johns Hopkins Hospital to be treated for cervical cancer, and her cells would go on to b
by Ineye Komonibo
Somos Libres
Why Black Puerto Rican Women Are Leading an Anti-Racist Media Ren...
While the 2020 Census was essential to many communities across the United States, it held a different meaning for Puerto Ricans. Battered after a decades-l
by Frances Solá-Sant...
Advertisement
Unbothered
R. Kelly Facing Life In Prison After Being Found Guilty Of Racket...
This story contains discussion of sexual violence. Please proceed with care. Updated September 27, 2021: Months after being charged and indicted for nine g
by Ineye Komonibo
Unbothered
Jennifer Hough’s First On-Air Interview About Nicki Minaj &...
*Editor’s note: this story contains discussions about sexual violence, threats, and intimidation. Please read with care.  A month after publicly all
by R29 Unbothered
Unbothered
CBS Will Now Turn Its Controversial Activist Competition Series I...
Updated September 16, 2021: After a wave of backlash followed the announcement of its controversial new series, CBS is going back to the drawing board to r
by DarkSkyLady
Unbothered
Megan Thee Stallion Wins Two Big Legal Victories — Against Her La...
Megan Thee Stallion scored two major legal wins this week, after a judge granted her the go-ahead to release the remix of BTS’ Butter that she is feature
by Tayo Bero
Unbothered
American Idol Alum Syesha Mercado Is Still In The Midst Of...
Singer and American Idol alum Syesha Mercado has regained custody of one of her two young children who were taken from her by authorities in Florida. Merc
by Tayo Bero
Unbothered
The Woman Assaulted By Nicki Minaj’s Husband Is Setting The Recor...
*Editor’s note: this story contains discussions about sexual violence, threats and intimidation.  Jennifer Hough —  who was assaulted by Nicki Minaj?
by Tayo Bero
Entertainment News
What You Need To Know About R. Kelly’s Trial That’s B...
This story contains discussion of sexual violence. Please proceed with care. On August 18, singer and producer R. Kelly will finally face trial for a litan
by Natalie Morin
Entertainment News
‘Self-Made Legend’: Lil Nas X On Being A Gay Icon And...
Lil Nas X has had an amazing year but like anyone in the early stages of a career on the rise, the journey hasn’t come without its share of struggles, do
by Tayo Bero
Entertainment News
Britney Spears’ Dad Is Finally On His Way Out Of Her Conservatorship
In a surprising and sudden development in Britney Spears’ ongoing conservatorship battle, her father has finally decided to step down from her conservato
by Natalie Morin
Advertisement
Advertisement
Discover
R29 Stories & News
Watch
R29 Original Series & Films
Shop
R29's Most Wanted